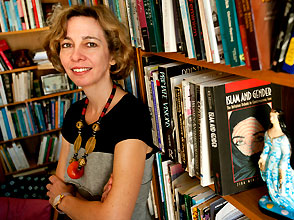 While I was conducting anthropological fieldwork in Niger, West Africa, in the mid-1990s, I started noticing groups of seemingly idle young men assembled in the streets. They drank tea and played cards while listening to the loud music escaping from boomers (boomboxes). Occasionally I would sit with them and enjoy a round of the heavily sweetened green tea they brewed in minuscule tea kettles. They could not find work, they said, which is why they “just sat.” Niger had recently returned to democratic rule but the implementation of economic reforms mandated by the World Bank and the International Monetary Fund were having a disastrous impact and unemployment, especially among the younger generation, had sharply risen. I decided I wanted to write a book to document the activities of these young men at the fada, the place where they sat together. In Hausa, Niger’s most widely spoken language, the term "fada" designates the emir’s court and the village chief’s council as well as the place of public audience and deliberation where rulers receive visitors and administer justice. The fada is thus the place where “people meet to talk.” In the 1990s the fada’s connotation as a customary form of community assembly was recuperated by young men to designate their own social gatherings.

In 2014 I was fortunate to receive an Award to Louisiana Artists and Scholars (ATLAS) to complete the book I was writing on young Nigerien men and their fadas. The book was to focus essentially on the main activities associated with fadas such as bodybuilding and hip hop. However, in 2014, I was also awarded a Glick Fellowship designed to enhance the sabbatical research of faculty in the School of Liberal Arts. I thus returned to Niger to document some of the artistic inscriptions whose appearance on the walls of Niamey, Niger’s capital city, coincides with the popularization of the fada. Young men etch the names of their fadas on the walls against which they sit, a trend that has radically reconfigured the look of urban landscapes throughout the country. These “writings on the wall” range from barely visible inscriptions to elaborately designed images; some feature childish scribbles, aggressive tagging, and awkward self-portraits while others are more sophisticated creations, painted by professional artists. By marking these locales with the visible signs of their presence, young men transform anonymous spaces into places they make their own. Through their use of an extremely varied range of acronyms, geographical referents, and cultural emblems as well as religious motoes and popular culture references, young men have contributed to the emergence of a whole new form of artistic expression in which ethics and aesthetics are intricately linked. These artistic creations are remarkable given that as a result of Islamic proscriptions against the depiction of human figures, paintings and murals are quasi inexistent in Niger.

During my trip to Niamey I was able to photograph more than 300 fada murals in 8 different neighborhoods. Aside from enabling me to document the fada’s artistic imprint on the urban landscape, the trip to Niger has enabled me to think about space (and the use of space) in productive ways. Moreover, the lifespan of these visual landmarks is relatively short. Exposure to rain and sun causes these murals to fade away in a matter of years, especially since the support is often a simple mud wall. The lives of fadas can thus be traced through the residue of street art that sticks to the walls, layering present experiences over faded pasts.

I would like to thank the Glick family whose support made my trip to Niger possible. Aside from enabling me to document how young men (far from just “sitting,” as their critics assert) actively beautify their neighborhoods and take pride in their youthful activities, the Glick fellowship has opened up new vistas for me. The most exciting part (aside from the nearly finished book): a film is in the works! After immersing myself in the beauty of fada visual art, I realized I also had to document from start to finish the choreographic dances that young men perform to compete with members of other fadas. 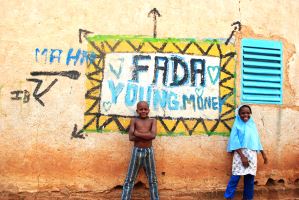 The fada's name, Young Money, stresses that financial success is a central concern of youth. 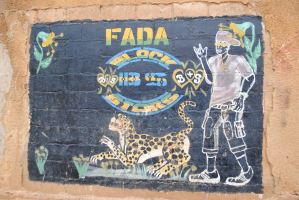 Members of Black Stars (or BS) visibly express their enthusiasm for hip hop culture. Animals such as panthers convey strength and fierceness. 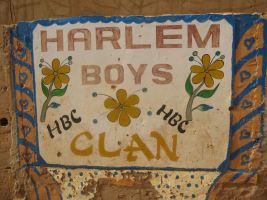 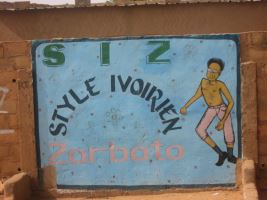 The name of this fada is inspired by a popular style of music from neighboring Ivory Coast. 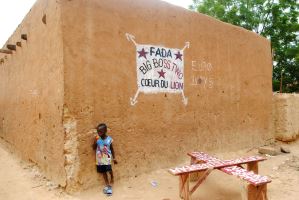