Congratulations to all of our graduating seniors and award winners of German & Slavic in 2018, with special kudos to: 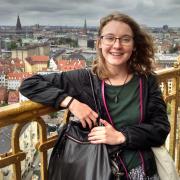 Audrey Brown is graduating May of 2018 with a B.S. in Geology, a B.A. in Anthropology and a Minor in German. While at Tulane, she fulfilled the first tier of the university public service requirement by working with the Historic New Orleans Collection to translate pre-WWI documents of a German steamship company into English. Audrey was awarded a DAAD stipend as part of the RISE Summer Internship Program, which gave her the opportunity to spend May through August of 2017 conducting earth science research at the Leibniz-Institut für Troposphärenforschung in Leipzig. After graduation, she will be heading back to her home state of Colorado to work as a field engineer, but she hopes to return to Germany within the next few years in order to pursue a graduate degree in geology. 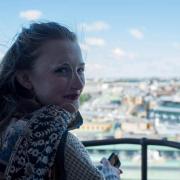 "For most Americans, the idea of Russia is filled with strange stereotypes and a general sense of danger. There is limited understanding of the reality of culture and life in modern day Russia. Studying abroad in St. Petersburg, and traveling within other parts of Russia, has helped to dispel these stereotypes, given me a broader picture of the world, and helped me improve my language skills. Most of all, meeting and talking to Russians has increased my understanding of people as a whole - Russia, as displayed by Western media, is not representative of Russians themselves. As my host mother once told me, so much of the misunderstanding between our cultures comes from politics. Studying abroad here is not dangerous or strange, but is a beautiful experience which I full-heartedly recommend."

"Prior to coming to Tulane University, I had studied German for 4 years and gone on 2 language and culture immersion trips to Germany and Austria. The German department at Tulane allowed me to continue studying the language and also gave me insight on historical and cultural topics from expert professors. The multitude of courses that I took in order to gain a B.A. in German allowed me to gain a greater confidence in my speech abilities as well as a more holistic knowledge of German culture and history, from Professor Brancaforte's course on Germany from its beginnings to the 1600s to Professor Schütze's course on East Germany post-WWII. From June to August of 2018, I had the opportunity to work an internship in Munich, Germany at Intana Biosciences, a biotechnology laboratory. This allowed me the ability to further my knowledge of German language and culture in a first-hand setting as well as building on my knowledge for my other degree, chemical and biomolecular engineering. After graduating, I plan on working in a similar field gaining knowledge for a few years before applying to schools in Germany to pursue a Ph.D. in biochemistry. " 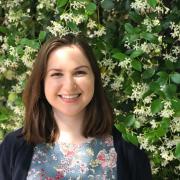 "During my time at Tulane, I was able to study both Russian language and culture through classes that covered Russian film, the Russian Avant-Garde, early and modern history, Moscow and St. Petersburg, among others. Through these classes I was not only able to gain a deeper understanding about historical and contemporary Russian culture, but I was also challenged and encouraged to independently study my own interests - such as the intersections of my Biomedical Engineering degree with my Russian one. After graduation, I'm planning on working in Washington, D.C. doing research."

"I studied abroad in Hamburg, Germany and Innsbruck, Austria for one year. Living abroad and taking courses in German was very beneficial in improving my listening and reading comprehension. It was a great part of my college experience. " 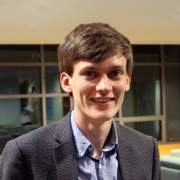 "I came to Tulane after two years without studying German, but I’m so happy I picked it back up again. I even ended up applying my German skills to my Honors Thesis in political economy, as part of it covered contemporary German politics. I’ve taken some really interesting and valuable courses in the German department, including history classes and the major seminar, which improved both my German and my general knowledge of the country. In the spring of my junior year, I studied abroad in Berlin (March-July 2017), which was one of the defining experiences of my time at Tulane. I learnt so much about a huge range of topics, inside and outside the classroom. After I graduate, I plan to work on a Democratic political campaign during the 2018 midterm elections, and after that I want to return, if briefly, to Berlin."

Congratulations to all graduating seniors of German & Slavic in 2017, with special kudos to:

Congratulations to Kelsey Lacourrege and Jennie Barker for receiving a Fulbright award for the 2016-2017 academic year! 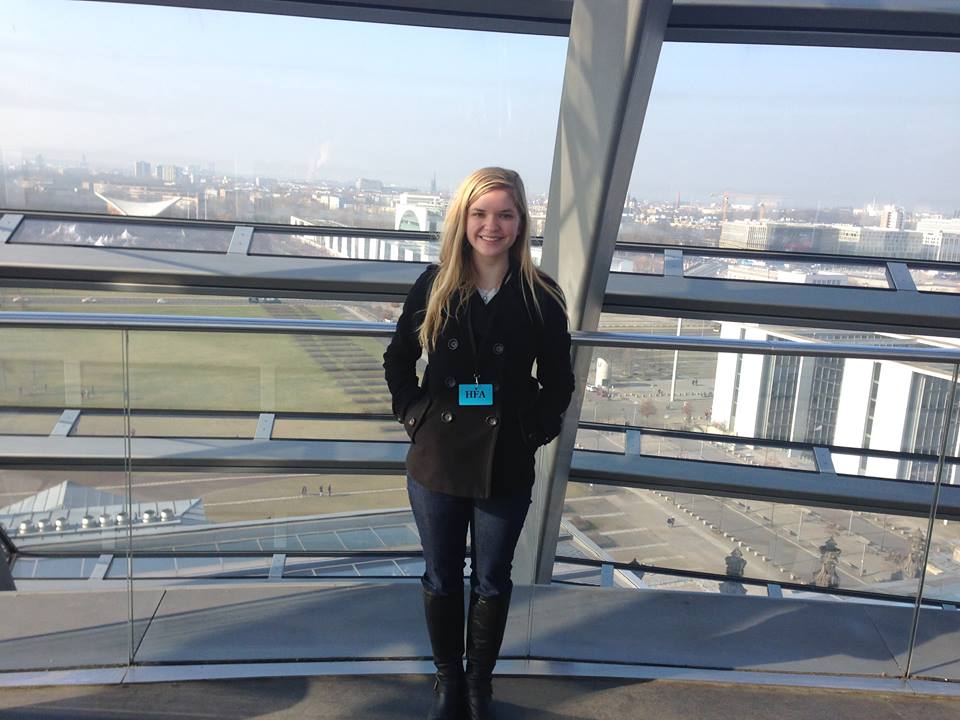 "I am currently serving as a Fulbright English Teaching Assistant in Hamburg, Germany, both the second biggest city in Germany and port in Europe, for the 2016-2017 academic year. I am working at a vocational high school that specializes in training students to work in trade and economics, which is fitting for Hamburg; the school is surrounded by warehouses and is within walking distance of the port. While I do teach Business English in some classes, I also help lead a class about culture, politics, and society in the United States and work in classes with students who are refugees. My experiences here have both sparked an interest in me to pursue teaching in the future and renewed my commitment to work towards finding a solution to the ongoing refugee crisis, an issue I focused on as an undergraduate at Tulane." 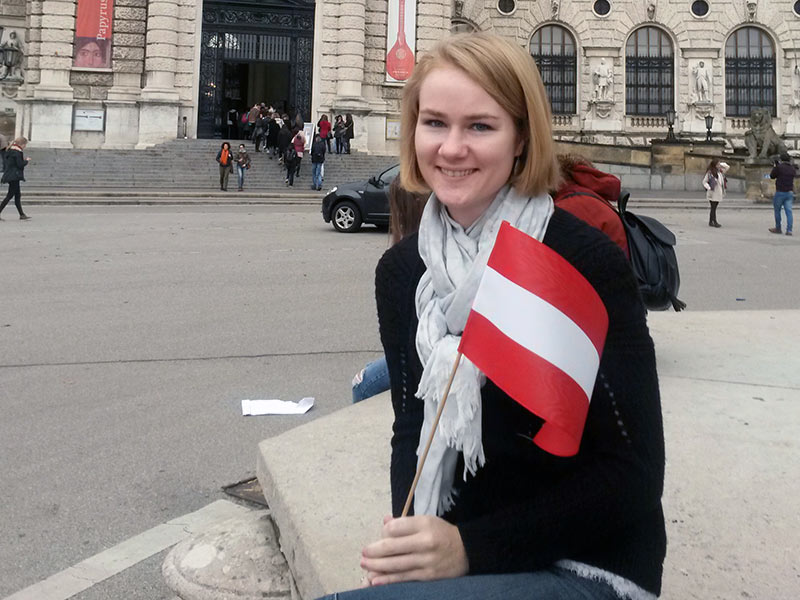 “As an inaugural Fulbright Austria Community-Based Combined Grantee, I have had the opportunity to engage with multiple communities in Vienna over the past 6 months. The primary component of my grant focuses on addressing social isolation in the local senior population. I work with the Vienna-based NGO Verein Jung und Alt, providing companionship for seniors while learning about care methodologies for the elderly. As a combined grantee, I also serve as an English teaching assistant at two local secondary schools. My interaction with school students has given me a broader perspective into the dynamic and diverse community here in Vienna. As a student at the University of Vienna, I have also been able to support my practical experience with a theoretical framework. Coursework in European Social Policy and Austrian Societal Change have deepened my understanding of the communities I encounter. But outside of my grant activities, I have also had many opportunities to explore Austrian life. From the Viennese ball season to school skiing trips to vineyard hikes and wine festivals, my time here has been full of many “only in Austria” moments. I am taking advantage of every moment here and am proud to represent Tulane while doing so!” - Kelsey Lacourrege Read full article

Meet our May 2016 German graduates

"I began learning German in high school, and I continued with my study of the language as a German major at Tulane. My primary major is international relations, and, given my interest in the politics of the EU, being able to speak German has opened up multiple avenues for me that would have otherwise been closed. For example, I spent the spring semester of my junior year studying abroad in Berlin, and, because of my German language skills, I was able to intern in the International Department of Die Linke, a German political party. I was also able to take German-language classes at Humboldt University in Berlin, so I was truly able to live as a 'Berliner' for six months! Yet speaking German also helped me in unconventional ways. I wrote my senior honors thesis on a topic about human rights in Turkey, which at first glance does not seem related to Germany at all. Because so many people of Turkish origin live in Berlin, however, I was able to both establish contacts and use German-language media as sources for my thesis. Knowing German has been helpful to my undergraduate studies and will continue to be helpful as I pursue my post-graduate career."

“I picked up German in high school after getting frustrated with French, a language in which one first learns a rule and then learns roughly twenty exceptions to said rule. German, of course, is rather the opposite in how strictly it adheres to grammar rules, and that’s something that really suited me. I continued to develop my language skills here at Tulane and got to put them to full use during a study abroad semester in Berlin (Fall 2014); it was this experience in the German-speaking part of the world that has led me to accept an Au Pair position right outside Wien (Vienna) starting in July of this year. “ 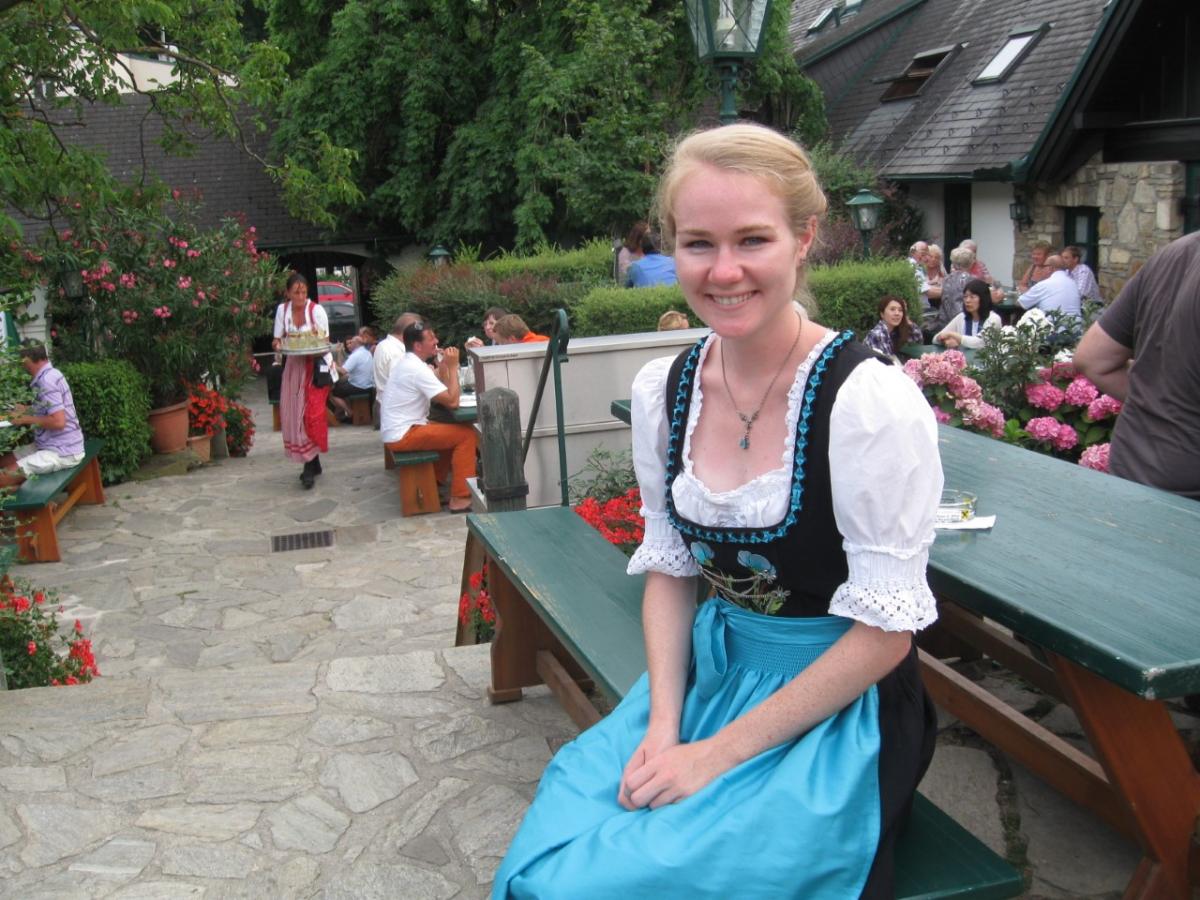 "Minoring in German at Tulane has allowed me to develop my practical language skills to prepare me for diverse professional experiences in the German speaking world. I completed a diplomatic internship with the U.S. Department of State in Vienna, Austria in 2014. This past summer in 2015, I conducted biomedical research in Rostock, Germany through a DAAD grant. Following graduation, I will return to Vienna for a year on a Fulbright Study/Community Service Grant (it's a three part grant that includes an English teaching assistantship, community service project, and coursework. I framed the grant as a public health project: for the community service portion I'll be working with socially-isolated elderly individuals, and I'll be taking public health coursework). After my year in Vienna I will return to New Orleans and begin a MD/MPH program." 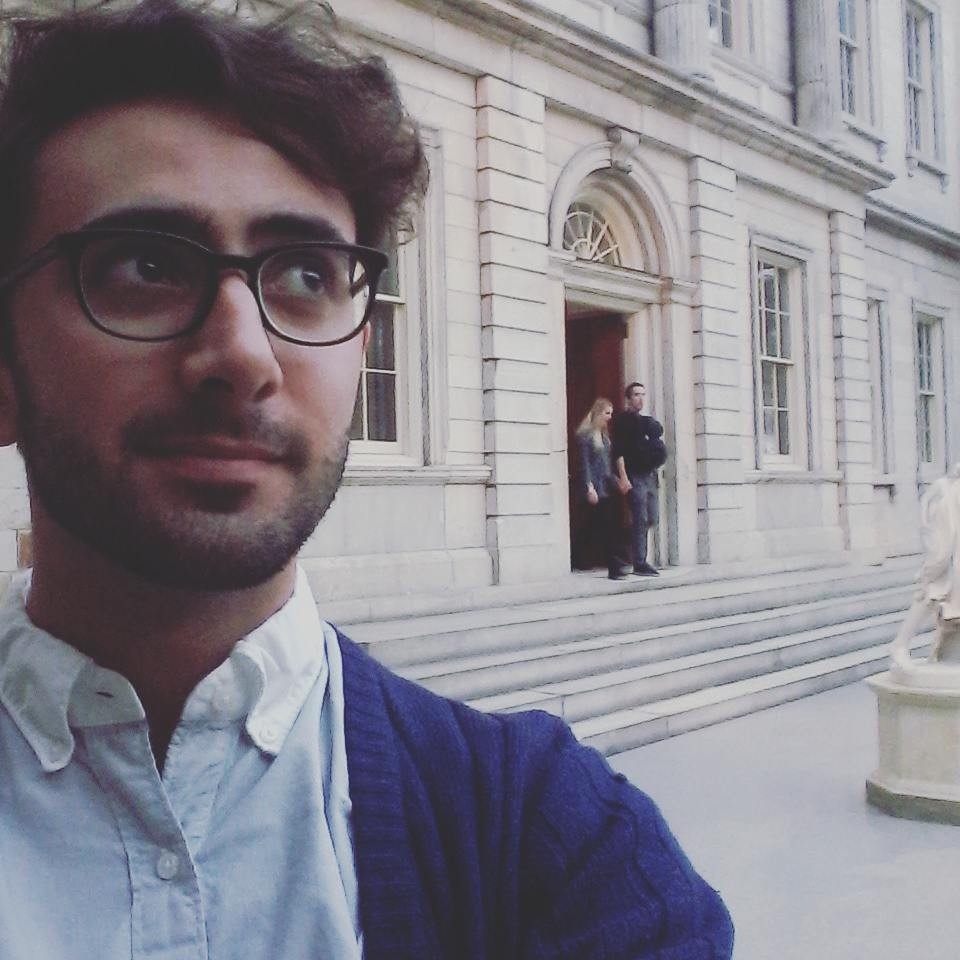 "Arriving at Tulane in the fall of 2012, the German language was completely foreign to me. My four years in the department have served me well, and I feel prepared for future engagement with German language and culture. The program has opened up new intellectual avenues, allowing me center my art historical education on the material culture of Germany and the Low Countries during the early modern period. In the fall, I will depart for Lille, which lies in the French portion of Flanders, to teach English for a year through the Teaching Assistant Program in France (TAPIF), a French government fellowship." 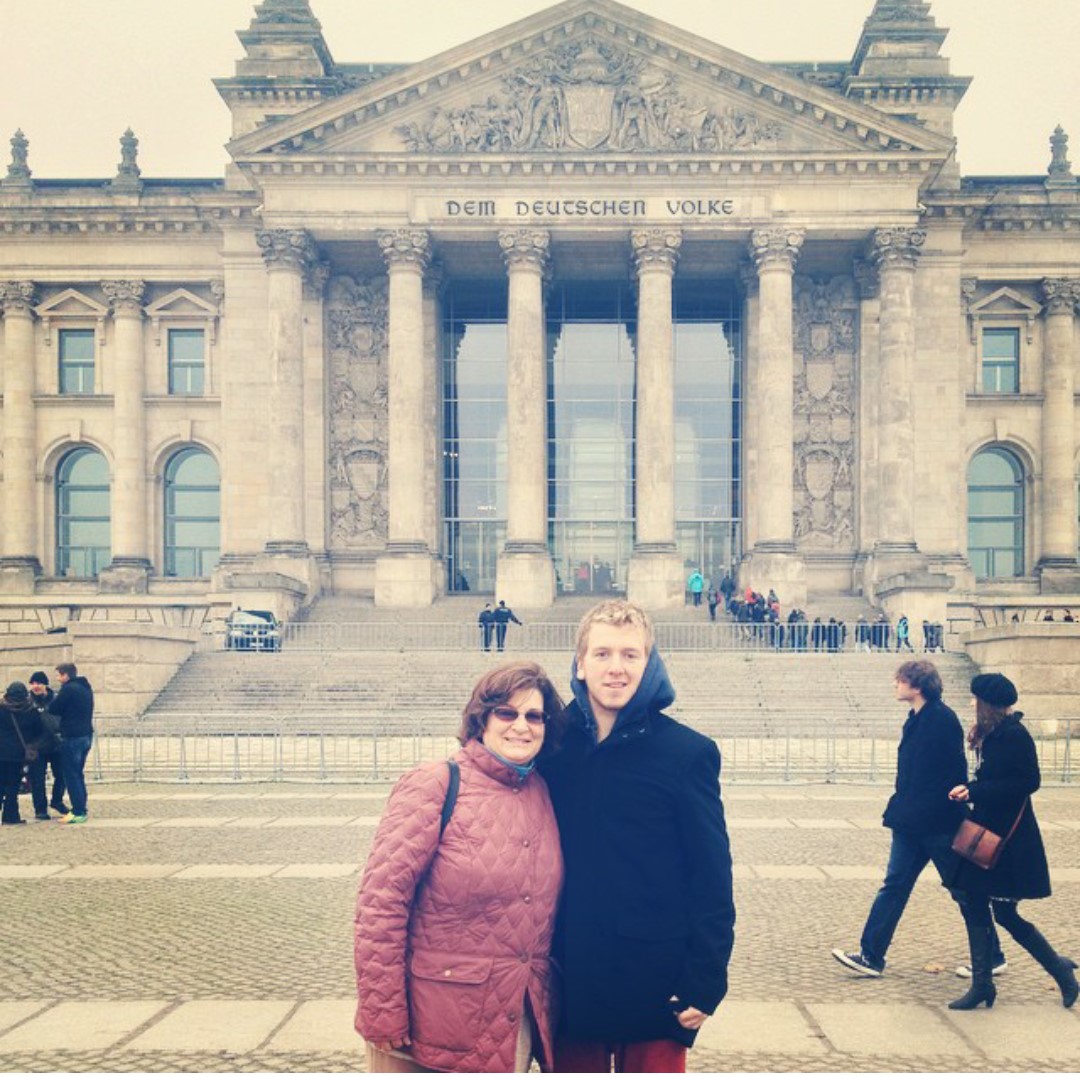 "I was at first apprehensive about minoring in a language, but the German professors were so helpful and course offerings so interesting, that I stayed and even studied abroad in Berlin. Next year I will be attending George Washington Law School, focusing on international law which I became interested in while abroad."

The Russian Book Prize for Achievement in the Russian Language is awarded annually to the Russian major or minor with the highest achievement.

The John T. Krumpelmann Fund was established in 1970 by the faculty of Germanic and Slavic Studies. The income generated by this fund is dedicated to the advancement of the study of Germanic Studies at Tulane University.”

The Sally Reed Atkins Award is awarded to a female student with an outstanding scholastic record for study in Germany. The recipient will have entered Newcomb-Tulane College as a freshman and studied the German language and literature seriously. It is not required that German is her major subject, only that she wishes to pursue the study of the language further.

The Ann Royal Arthur Memorial Award in German was established in 1987 in memory of Professor Ann Royal Arthur of the Department of Germanic and Slavic Studies. It is awarded to a student who has demonstrated a commitment to the study of German.

The department strongly encourages students to join the Epsilon Zeta chapter of Delta Phi Alpha, the German National Honorary Society. Students are eligible to join if they have at least two years of university-level German courses or their equivalent; a minimum overall GPA of 3.0; a minimum German GPA of 3.5; and a continued interest in the study of German language and culture.