Film Screening: Children of the Inquisition

Children of the Inquisition: Their Story Can Now Be Told reveals the stories of the families who were forced to convert to Catholicism or flee during the Spanish and Portuguese Inquisitions (1478-1834) through the eyes of their contemporary descendants. Through these families’ journeys, the film explores and reveals the commonalities that transcend race and religion. In the film, descendants come to understand how their ancestors shaped history and how their perilous history shaped their identities. The film's producer and Tulane parent, Hilary Klotz Steinman, will help to introduce the film and answer Q&A afterwards.

If you cannot attend in person, the film's producers have agreed to share a link for 24 hour virtual access to the film. Sign up for the eventbrite event! 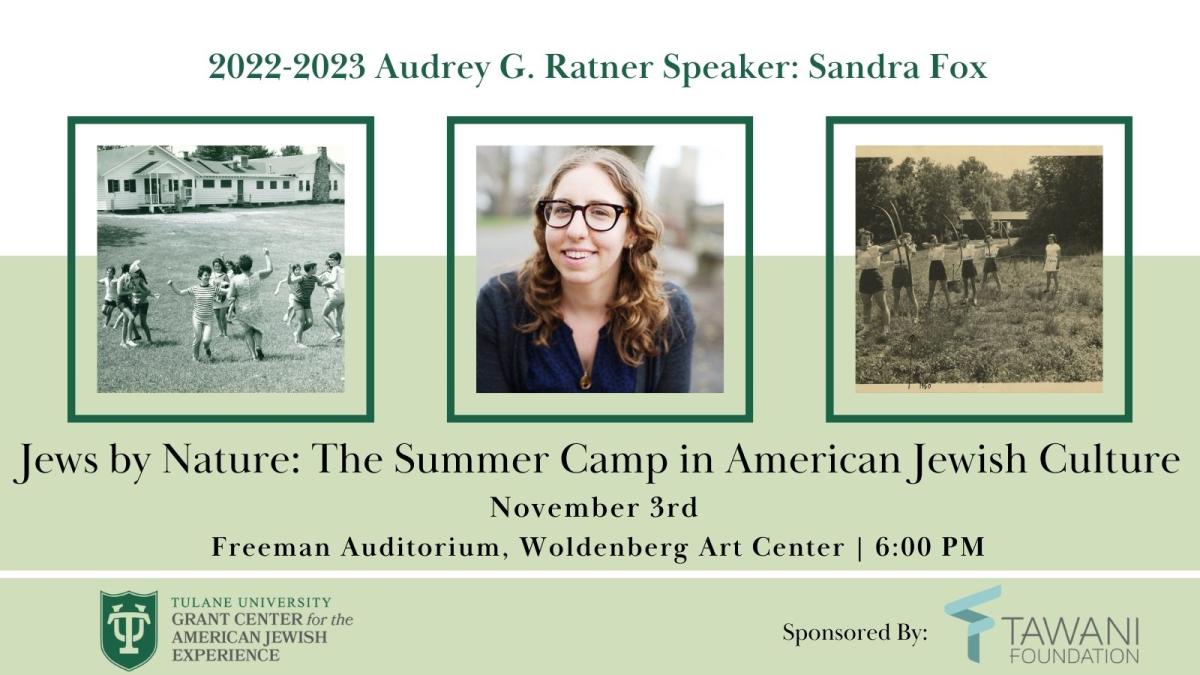 "Jews by Nature: The Summer Camp in American Jewish Culture"

How did the residential summer camp become an integral part of American Jewish life? Is there something special about the relationship between Jews and camp? In the decades directly following the Holocaust, American Jewish leaders anxiously debated how to preserve and produce what they considered authentic Jewish culture, fearful that growing affluence and suburbanization threatened the future of Jewish life. Many communal educators and rabbis contended that without intervention, Judaism as they understood it would disappear altogether. They pinned their hopes on residential summer camps for Jewish youth, institutions that sprang up across the U.S. as places for children and teenagers to socialize, recreate, and experience Jewish culture. Adults' fears, hopes, and dreams about the Jewish future inflected every element of camp life, from the languages they taught to what was encouraged romantically and permitted sexually. But adult plans did not constitute everything that occurred at camp: children and teenagers also shaped these sleepaway camps to mirror their own desires and interests and decided whether to accept or resist the ideas and ideologies their camp leaders promoted. In this lecture, Sandra Fox explains how a sense of cultural crisis birthed a rite of passage for Jewish children across the country.

Sandra Fox is a Visiting Assistant Professor of Hebrew Judaic Studies at New York University and the director of the Archive of the American Jewish Left in the Digital Age. Dr. Fox is the founder and executive producer of the Yiddish-language podcast Vaybertaytsh: A Feminist Podcast in Yiddish and is a peer-review editor at In geveb: A Journal of Yiddish Studies. Her book, The Jews of Summer: Summer Camp and Jewish Culture in Postwar America (Stanford University Press, February 2023), addresses the experiences of youth in postwar Jewish summer camps, and the place of intergenerational negotiation in the making of American Jewish culture.

A fund for Lectures, Roundtables, and Films will bring internationally renowned speakers to the Grant Center. Our participants—artists, scholars, public intellectuals, communal leaders—will contribute to a robust conversation about Jewish culture, history, and ideas, to which the entire Tulane community is invited.

Find Us on Social Media