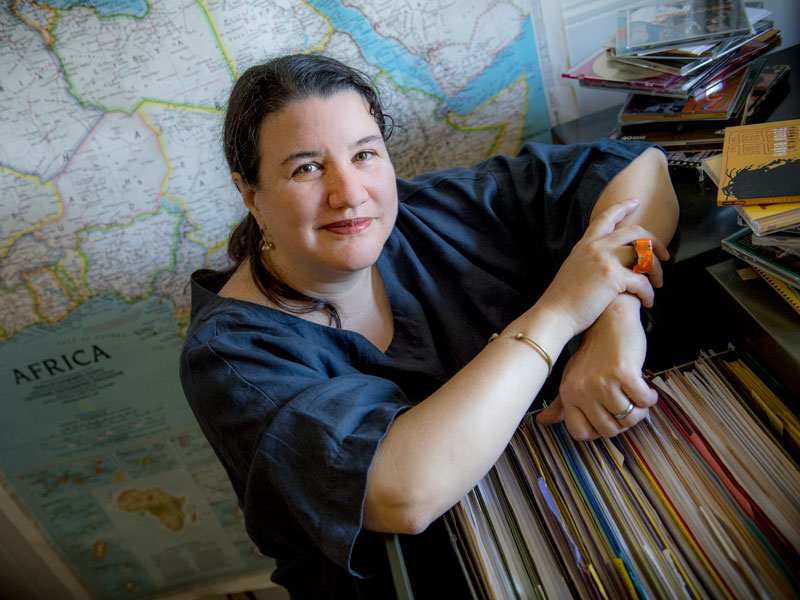 Elisabeth McMahon specializes in African history. Her research takes a multifaceted approach to thinking about the role of colonialism and its impact on the interior, emotional lives of Africans. When she completed her dissertation, “Becoming Pemban” she was left with two significant questions: How did formerly enslaved people living in the Zanzibar Islands transition to “free” colonial subjects and what role did colonial efforts to “modernize” Africans have in shaping narratives of international development. The first question was answered in her first book Slavery and Emancipation in Islamic East Africa: From Honor to Respectability (Cambridge University Press, 2013). Along with her co-author, Dr. Corrie Decker, she took a broader approach to answer the second question in their book, Idea of Development in Africa: A History (Cambridge University Press, 2020). All of her publications examine the role of empire and its links with enslavement, racism, and gender. A 2021 co-authored editorial in the Washington Post illustrates the continuing legacies of colonial racism.

McMahon’s current book project evolved out of several articles she published on the histories of emotion, the law, and gender. “Hidden in History: East African women’s radical refusal” is a history of women in coastal East Africa from 1820-1920 who challenged the norms around violence, power, sex, gender, and race in their lifetimes. This book tells the history of East African women as those who embraced opportunities to challenge the expectations and norms around their bodily autonomy, sexual violence and desire, and making a life in a world where they encountered the mundane, everyday violence of patriarchy and control. From enslaved to elite – girls and women on the coast challenged social norms, even when knowing they would be punished by patriarchal systems, which included other women. Female resistance is often submerged in the household, rather than seen as the actions of females confronting social expectations and finding them insufficient, callous, or undesirable. Surprisingly little research has been published on women in coastal East Africa before the 1890s, likely because as scholars such as Jessica Marie Johnson and Marisa Fuentes have noted, in the archives there are blank spaces where there should be women’s voices and bodies. This book challenges several key narratives of coastal Swahili communities including the complacency and acceptance by enslaved women of their status, the static role of religion in the region, and the public/private and male/female dichotomies of households and politics.

Slavery and Emancipation in Islamic East Africa: From Honor to Respectability

By examining the social vulnerability of ex-slaves and the former slave-owning elite caused by the abolition order of 1897, this study argues that moments of resistance on Pemba reflected an effort to mitigate vulnerability rather than resist the hegemonic power of elites or the colonial state. As the meaning of the Swahili word heshima shifted from honour to respectability, individuals' reputations came under scrutiny and the Islamic kadhi and colonial courts became an integral location for interrogating reputations in the community. This study illustrates the ways in which former slaves used piety, reputation, gossip, education, kinship and witchcraft to negotiate the gap between emancipation and local notions of belonging. Whereas much scholarship claims that slavery in Islamicate East Africa manufactured kinship relations between slaveholders and enslaved people, my book demonstrated the racial foundations of slavery in Pemba, the legacies of which remain in stigmas prevalent in East Africa today.

“McMahon has made a major contribution to the literature on slavery and slave emancipation not only in Islamic East Africa, but also in other Muslim societies in Africa.” - Ahmad Alawad Sikainga, African Studies Review

“McMahon’s careful and nuanced exploration of Pemba during a vital period of transition challenges conventional perceptions of slavery and abolition in East Africa and advances new arguments about the relationships between colonialism, power, and honor. The book also makes significant interventions regarding gender and slavery.” -Matthew Hopper, International Journal of African Historical Studies

“All in the Name of Development: Forcing ex-slaves into the wage economy in post-WWII Zanzibar,” International Labor and Working-Class History 92 Fall 2017, pp.114-133.

“The making of a marriage crisis among emancipated slaves on the Swahili coast,” in Gendered Lives in the Western Indian Ocean: Islam, Marriage, and Sexuality on the Swahili Coast, edited by Katrina Daly Thompson and Erin Stiles. Ohio University Press, 2015. Indian Ocean Studies series edited by Richard Allen.

The African Letters Project (ALP) is a database of over 5000 letters written between Africans and Americans from 1945 to 1994. The aim of the project is to build a globally-accessible database with indexing and photographs of all letters listed in the database. Currently, the ALP draws letters from the collections of Maida Springer Kemp and the American Committee on Africa, both held at the Amistad Research Center. The African Letters Project has several goals: Firstly, to make accessible to African researchers and teachers archival materials located in the U.S. but relevant to studying the history of decolonization in Africa. Secondly, to create .csv spreadsheets with the data that can be downloaded and used in a variety of digital humanities open-source software applications so that researchers and teachers can use the data for their own work and to teach about African nationalist movements.

A recipient of Tulane’s highest award for undergraduate teaching, the Weiss Presidential Teaching Award, McMahon’s teaching interests range widely across the African continent and are deeply connected to her research. She regularly teaches the introduction to African history, lecture courses on Southern African history and Development in Africa. Along with seminars on gender, power, and archiving in African history. Many of her courses offer service learning in partnership with the Amistad Research Center.

The Idea of Development in Africa

This book explores the origins of international development and how this foundation shaped discourses on Africa in the present. McMahon and Decker trace the histories of racism in international development from the early 1800s to the present, by showing that race was central to what they call the “development episteme,” which is the dominance of western epistemologies that claim there are real, measurable differences in “development” between nations, societies, or social groups. The book outlines how western images of modernity were imposed onto African cultures, and thus used to portray African societies as deficient by comparison. These ideas, encompassed within the development episteme, grew from the pseudo-scientific and racist work of European scientists, missionaries, and colonizers in the nineteenth century. At the turn of the twentieth century, eugenic theories became central to the development episteme. After the Holocaust, eugenicists transformed their arguments away from racial difference and made claims to cultural difference. They demonstrate that by the early 1950s, the International Monetary Fund and World Bank drew on these race-based ideas about cultural difference in shaping international development policies. The development episteme, still grounded in racial and cultural hierarchies, endured in Africa in the form of Structural Adjustment Programs, non-governmental organizations (NGOs), and other international interventions.

“A smart, sweeping history that explores how colonial ideas about Africa and Africans – including more imperatives, the invention of ‘tribes,’ and scientific racism – shaped development paradigms and projects across the continent. The Idea of Development in Africa is a ‘must-teach’ book for courses on Africa and in development studies.”  - Dorothy Hodgson, Brandeis University

“This refreshing and innovative study packs a double punch. First, it offers a bracing critique of the development industry, locating its roots deep within the colonial mind-set. Then it follows with a brighter vision of Africa, one that emerges from the continent’s own artists, thinkers, and leaders. A feast to which all are invited.”  -Gregory Mann, Columbia University