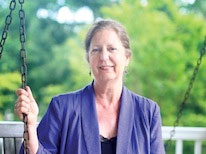 Molly Abel Travis is an Associate Professor of English and Associate Dean of Newcomb-Tulane College. She is also a participating faculty member in the Gender and Sexuality Studies program, the Film Studies program, and the program in Digital Media Practices. She has published essays on narrative theory, reception theory, media theory, and gender and race in 19th- and 20th-century American, British, and South African literature and culture. Her first book was Reading Cultures: The Construction of Readers in the Twentieth Century. Her current projects include a book manuscript, "Imagining the New South Africa: Narratives of Nation in a Global Culture." Professor Travis has been involved in numerous institutional efforts at Tulane to reform the undergraduate curriculum: she has chaired the President's Task Force on Teaching and the President's Strategic Planning Committee on the Undergraduate Experience. In addition, she has served as Director of the Office of Service Learning and Executive Director of the Center for Global Education. Professor Travis received the 1999 Tulane Award for Excellence in Undergraduate Teaching.