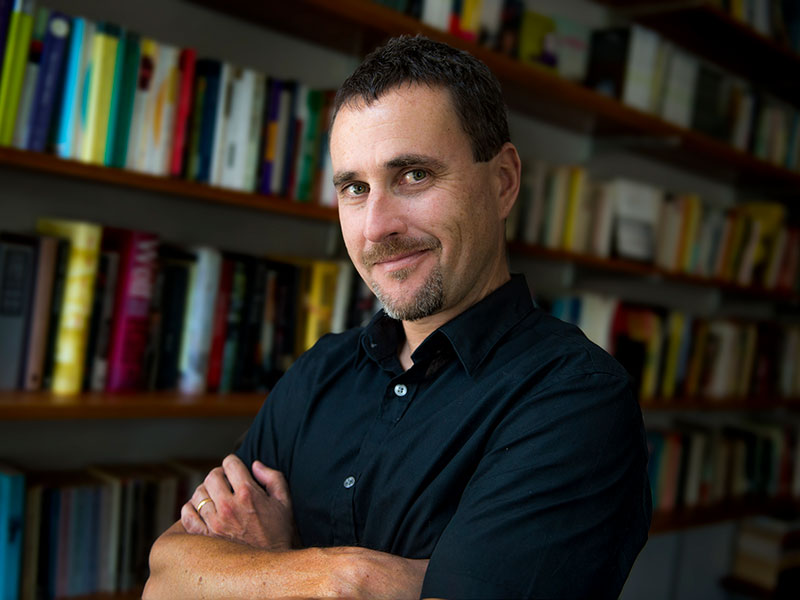 Zachary Lazar earned an A.B. degree in Comparative Literature from Brown University (1990) and an M.F.A from the University of Iowa Writers Workshop (1993). He is the author of six books, including Sway (2008), Evening’s Empire: The Story of My Father’s Murder (2009), I Pity the Poor Immigrant (2014), Vengeance (2018), and The Apartment on Calle Uruguay (2022). The critic James Wood wrote in The New Yorker that Lazar “crafts singular narratives out of diverse sources” which display a “preoccupation with the private side of public lives, the interaction of history and fiction, the use of multiple source texts, and the severe glamour of crime.” I Pity the Poor Immigrant was a New York Times Notable Book of 2014. His novel Vengeance was the 2019 selection of One Book One New Orleans and the Tulane Reading Project. Sway was a finalist for the Barnes & Noble Discover Award and an Editor’s Choice at the New York Times Book Review, as well as a best book of 2008 in the Los Angeles Times, Rolling Stone, Publishers Weekly, and several other publications.

Among his other classes, Lazar teaches an introduction to creative writing that brings together students from Tulane and incarcerated students in Louisiana jails. The class has been profiled in the Netflix documentary The Creative Brain. Lazar also serves on the advisory board of the PEN America Writing for Justice Fellowship and the selection committee for the National Book Foundation’s Literature for Justice program.

Lazar’s honors include a fellowship from the John Simon Guggenheim Foundation, a Hodder Fellowship from Princeton University, an ATLAS grant from the state of Louisiana, and the 2015 John Updike Award from the American Academy of Arts and Letters for “a writer in mid-career whose work has demonstrated consistent excellence.” He is a frequent contributor to the New York Times Book Review. His journalism has also appeared in the New York Times Magazine, NPR’s All Things Considered, the Los Angeles Times, BOMB, and elsewhere.

Zachary Lazar in the News