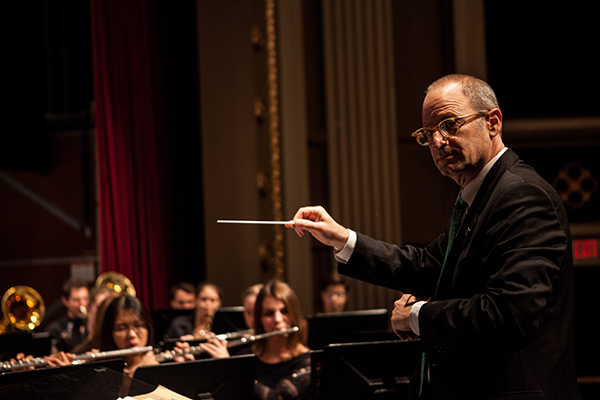 Barry Spanier has directed and produced music for events on the world’S largest stages, including two Olympics and a World Exposition, plus special events, festivals, concerts, and musical theatre. The hallmark of Mr. Spanier’S career has been establishing new musical ensembles and building programs and organizations. For World Expo 88, he designed and directed a marching band program in an environment that previously had no such tradition. For the Sydney Olympics he directed 2,000 young musicians from 23 nations and blended them into a cohesive ensemble, the largest marching band in history. As leader of the New York University Orchestra Mr. Spanier revitalized the program and built it from a rudimentary 19-piece string group to an 85-piece symphony plus secondary orchestra and various chamber groups.

Mr. Spanier performed as a trumpet player and percussionist with artists Don Ellis, Lalo Schiffrin and Maynard Ferguson, amongst others. He has also served as music director and conductor for dozens of musical theatre productions and recording sessions in commercial and academic settings.

DIRECTOR of the NYU Center for Music Performance
Directed the 85-piece New York University Orchestra and related ensembles. These groups presented seasonal concerts and community outreach programs such as the Young People’S Concert and performances at local area hospitals.

Supervised music for major University events, such as Commencement, convocations, and festivals, and presented a weekly jazz series.

ARTISTIC DIRECTOR of the Sydney 2000 Olympic Band
Directed the 2000-piece marching band for the Opening Ceremony of the 2000 Summer Olympic Games in Sydney, Australia. Young musicians participated from twenty-three nations on six continents. Conducted the ensemble performance at the Opening Ceremony, consisting of a ten-minute field show followed by a 105-minute parade of athletes.

EXECUTIVE PRODUCER & FOUNDER of the NYU Gallatin Arts Festival
Presented 150 artists in interdisciplinary performances and exhibits of all art forms over a twelve-day period. This inaugural Festival took place in 1992, and has since become an annual event at NYU.

VENUE BAND COORDINATOR for the 1984 Summer Olympic Games
Coordinated all live music at the twenty-four venues of the 1984 Summer Games. Also served as an instructor of the 800-piece All-American College Marching Band, featured at the Opening and Closing Ceremonies at the Los Angeles Memorial Coliseum.

ASSOCIATE CONDUCTOR for the University of Southern California Trojan Bands
Conducted and directed the various ensembles of the Trojan Band Program from 1980-85. These included the Los Angeles Lakers’ Band, collegiate athletic pep bands, and ensembles for special events.