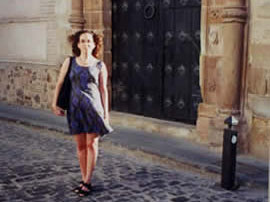 When the days were at their coldest and shortest up here. Yet even with the long and snowy winter (how amazed I was one day in mid-March see the sidewalk again beneath my feet!), this was a wonderfully invigorating year, full of new opportunities and connections. I was welcomed very warmly in the department and given a corner office in the Rochambeau House, built as the residence for a former chancellor in the 1920s and shared by Hispanic and French Studies since the late 1980s. While Hispanic Studies was my home base, I participated as much as possible in Brown’s larger scholarly community, attending lectures sponsored by the Program in Renaissance and Early Modern Studies, the Medieval and Early Modern Studies History Seminar, and the John Carter Brown Library.

Of course, much of my energy went into teaching. In the fall, I taught an undergraduate survey of peninsular Spanish literature and a graduate seminar on seventeenth-century Spanish theater; in the spring, the survey once again and an undergraduate seminar called "Fashion and Fictions of Identity in Early Modern Spain." The survey was perhaps my biggest challenge. My own area of expertise is in the sixteenth and seventeenth centuries, and at Tulane I’m used to teaching a survey of "Early Readings in Spanish," which covers major authors and texts from the medieval period through the baroque. Yet here I suddenly found myself having to cover Spanish literary history through the twentieth century. The challenge turned out to be immensely rewarding. The course asked me (and the students) to consider the making of a "Spanish" literary tradition as a conscious process of appropriating and reinventing particular forms and themes over time; as those scare quotes suggest, it also asked us to reflect on the very constitution of a national literature in what is today a plurinational and plurilingual state and what was, for centuries, a multilingual and multicultural composite of separate kingdoms.

Issues of national-literary canon formation were also the focus of an article I finished on a 1639 Castilian translation and annotated edition of Luis de Camões’s Lusíades by Manuel de Faria e Sousa, a Portuguese writer living at the Spanish court in Madrid in the 1630s. The extraordinary John Carter Brown Library has a copy of Faria e Sousa’s monumental work (it consists of 2,400 columns of text printed in two volumes in folio format). In addition, I was able to visit the nearby Houghton Library at Harvard which holds a rare manuscript draft in the commentator’s own hand. My point of departure was Faria e Sousa’s naming Camões the "Prince of the Poets of Spain": struck by what initially seemed a contradiction, I argued that this literary crowning made perfect sense in relation to the composite loyalties and literary rivalries that characterized Iberian lettered culture throughout the early modern period. 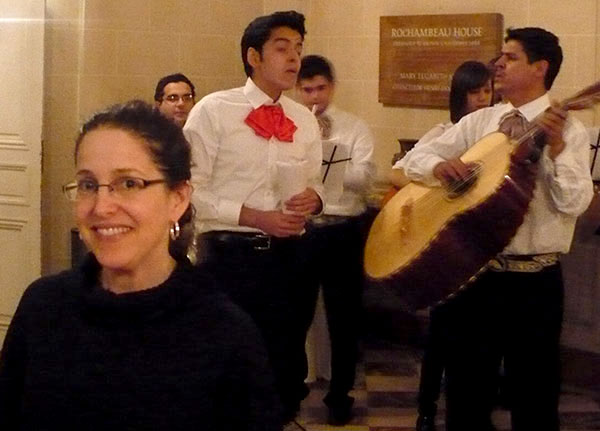 In terms of my scholarship, I took advantage of being in the Northeast to accept three invitations to lecture on city views of seventeenth-century Madrid—at the Institute of Fine Arts in New York City, the Center of Visual Culture at Bryn Mawr College, and the Program in Renaissance and Early Modern Studies at Brown. Feedback from audience members and continued research, including a trip to Madrid over the winter break, allowed me to deepen and refine my arguments each time and to complete the draft of an article. I have also just finished a proposal for a new book titled Fashioning Baroque Madrid: The Court City and its Social Geographies, 1561-1700, a cultural history of Madrid during the period of its transformation from a secondary town into the capital of imperial Spain. As we know so well in New Orleans, a city is built, or rebuilt, not only of tangible structures and streets but also of stories and images that invest places with meaning. My aim, then, is to trace the literary and artistic forms that gave conceptual shape to Madrid’s changing urban landscape and social geographies.

As I finish this, I am about to load up and cross another landscape, beginning my road trip home from one American historic port city to another. I am excited to return to my home on Laurel Street and my home in Newcomb Hall. I’m looking forward to incorporating new ideas for teaching I learned from colleagues at Brown—like giving students creative options for final projects in literature classes—and to returning to my position as graduate studies director of Spanish and Portuguese. I’m eager to participate once again in the daily life of the department, the activities of the Program in Medieval and Early Modern Studies, and the Stone Center for Latin American Studies. Above all, I’m looking forward to being in day-to-day contact with my friends and students at Tulane.