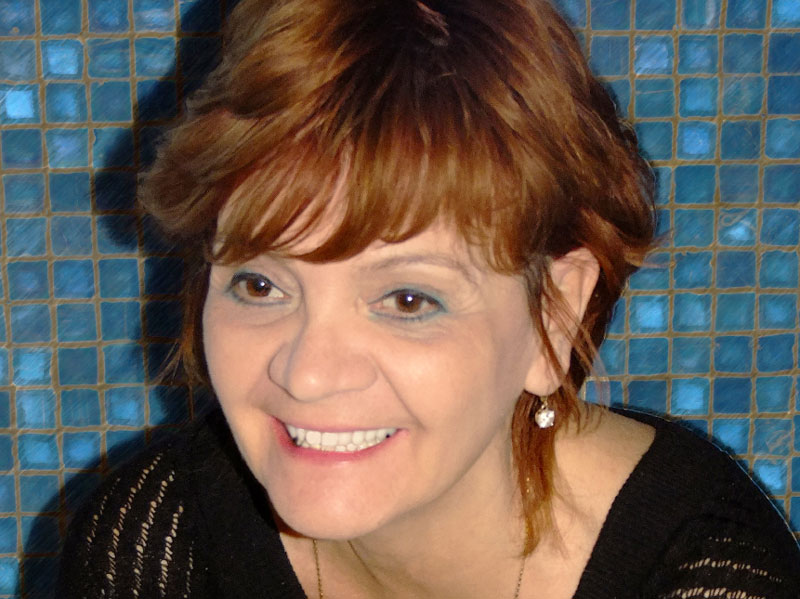 As a Romanian – born, raised, and educated – I maintain close connections with my fellow artists back there, especially the theatre, television and film community. Most of them are now at the very top of their artistic/academic excellence; in a country that has long been known for high theatre standards, where names like Andrei Serban and Liviu Ciulei need no introduction. 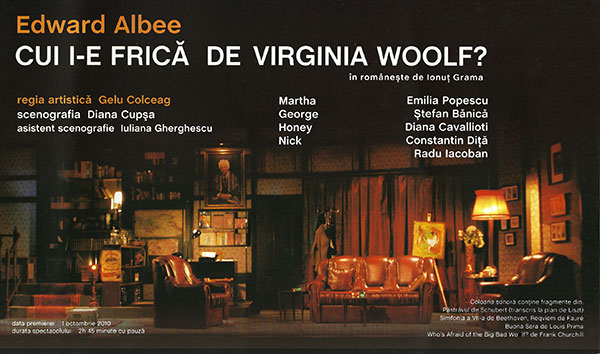 One such personality of the Romanian theatre is Professor Gelu Colceag, PhD, whom I worked with on many productions. Gelu is the current Rector of the National University of Theatrical and Cinematic Arts, UNATC, in Bucharest. He asked me in the fall of 2009 if I would consider designing the sets and costumes for a new production that he was planning to direct at the Comedia Theatre (a well respected professional repertory theatre in Bucharest City which is home of some 40+ professional stages). The show was Who’s Afraid of Virginia Woolf, Edward Albee’s masterpiece. My Tulane sabbatical leave was scheduled for the spring of 2010 so the timing couldn’t have been better. Also, knowing of my long stay in Bucharest, Gelu asked me if I could assist as a guest adviser the UNATC’s Theatre School Curriculum Committee, which was working towards realigning their Program with the newly released guidelines of the European Union Education Commission for artistic training. I accepted the invitation again, so my sabbatical leave promised to be a fully packed one. And so it was.

The work for the show started while I was still in New Orleans during the first few weeks of 2010. My meetings with the director were held through Skype almost every other day for a month or so. Having worked in the past on many productions together, Gelu and I know very well each other’s artistic values, work style, techniques and skills, to the point where the shaping of the entire production was achieved a lot sooner than we had expected. The main technical challenge posed by the sets was the proposed stage-wide rolling platform, which had to have a very low profile with noise-free high mobility and easy maneuverability.

Designing the costumes for the leading actors Stefan Banica (George) and Emilia Popescu (Martha) was no easy task either. Stefan Banica – a famed Romanian actor who has always had an image of young, sleek, flamboyant performer – had to become an elderly university professor, a role that he had never played in the past. On the contrary, for Emilia Popescu, Martha’s character was fitting her acting personality beautifully. One of the most praised drama actress in Bucharest, Emilia’s energy had to be balanced by toned down, plain, and functional costumes. 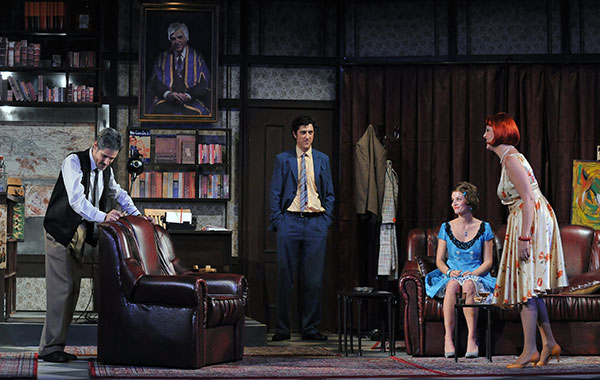 The show opened on October 1, 2010 – amid excellent reviews and full house performances – and is scheduled to play on weekly basis for many years to come.

While working on the Virginia Woolf production, I was conducting a series of lectures in Contemporary Design in American Theatre and also in Portfolio Techniques for MFA design students at the UNATC. These lectures were held daily for two weeks during the second half of February, 2010. They were well received by the Romanian graduate students who are always keen to learn about their profession in other parts of the world.

Finally, my work as an adviser to the UNATC’s Curriculum Committee for the revising of their Program resulted in a series of recommendations that were reviewed, amended and adopted by the UNATC Senate.

I look back at my sabbatical leave during the Spring of 2010 and I realize how important it is for me to be able to venture every once in a while into diverse cultural and geographical “zones” and allow my creative energies to refresh themselves.