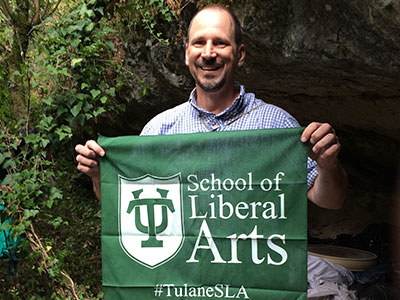 Trenton Holliday, Professor and Chair of Anthropology, standing in front of the rock shelter at Abrigo do Poço.

I am a paleoanthropologist with broad interests in human evolution. This summer I worked at prehistoric sites in both France and Portugal. In France, I worked with my longtime friend and colleague, Dr. Bruno Maureille of the University of Bordeaux, at two sites near the town of Montignac in the Dordogne region of SW France. These two sites, Regourdou and La Balutie, are located on the same hill as the famous Lascaux Cave. Since 2014, and with the aid of a Louisiana Board of Regents RCP Grant, I have been working at Regourdou, a site at which a fairly complete Neandertal skeleton (Regourdou 1) was discovered in 1957. Just this month, preliminary dates of a stalagmite that overlies the level from which the Neandertal skeleton was recovered suggest that Regourdou 1 may be the oldest partial Neandertal skeleton from Western Europe, with an age of perhaps 95,000 years! Our team hopes to open new excavations at Regourdou to better understand the nature of the site, and also recover the Regourdou 1 cranium, which was never found. However, we must first shore up the walls of the site (which are in danger of collapsing) before the French government will allow us to dig. We are currently seeking funding to pay for half of this engineering work (the French government will pay the other half).

The site complex of La Balutie, located about half a mile from Regourdou, includes a cave discovered in the nineteenth century that in the early twentieth century was completely emptied of sediments and artifacts by the infamous Swiss antiquarian Otto Hauser. However, in 2015 we discovered a portion of the site (a collapsed rock shelter) that Hauser missed, and this year in systematic excavations, members of our team, led by Dr. Aurélien Royer (University of Bordeaux), recovered many hundreds of pieces of reindeer, red deer, and horse bones, as well as stone tools from the Mousterian industry, which in Europe is associated with the Neandertals.

This summer I also did archaeology in Portugal for the first time since 2009, working with another old friend and colleague, Dr. Telmo Pereira of the University of Algarve. Telmo, Vânia Carvalho (Director of the Leiria Museum) and I secured funding from the Wenner-Gren Foundation for survey and excavation in the Lis River Valley of Central Portugal. This summer our team dug a test trench at the site of Abrigo do Poço. This site, whose name means “rock shelter of the well” in Portuguese (so named because there is an historic-period well near its base), is located in a small valley (the Chitas Valley) of a tributary of the Lis River. Unlike La Balutie, this site has thus far yielded very few animal remains (although we did recover many snail shells and an abundance of charcoal). In terms of stone tools, so far we have found artifacts from the Solutrean and Gravettian industries, which at ca. 26,000 to 18,000 years ago are associated with early modern humans (colloquially known as the “Cro-Magnons”).

The work in Portugal is exciting because, unlike in France, relatively few Paleolithic sites have been excavated, so the country is pretty much an “open book” with much waiting to be discovered. Also, archaeological survey leads us to believe that sites in the Lis Valley preserve much data from the crucial time period corresponding to that of the last Neandertals (the Iberian Peninsula is one of the last places Neandertals survived, with some [controversial] data to suggest that they were present there as recently as 28,000 years ago) and the earliest anatomically modern Europeans. 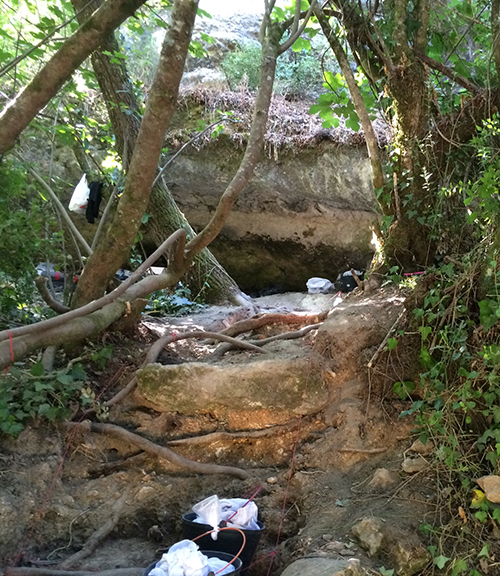 The site of Abrigo do Poço in central Portugal. 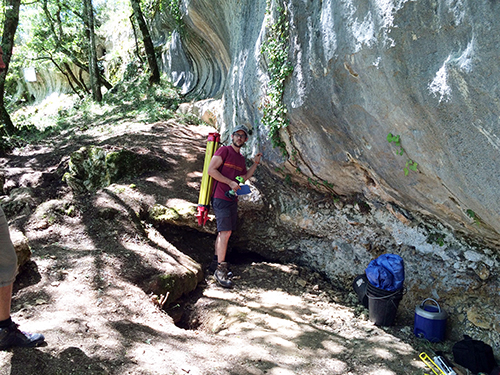 Archaeologist Xavier Muth, a member of our research team, stands in front of the collapsed rock shelter site of La Balutie in SW France. 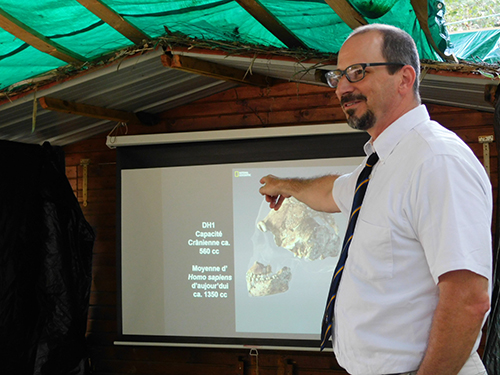 Holliday, who also works in South Africa, was asked to give a public lecture at Regourdou on the recently named fossil hominin species Homo naledi. Holliday's colleague Bruno Maureille believes that Holliday is the first member of the Homo naledi research team to speak in France.