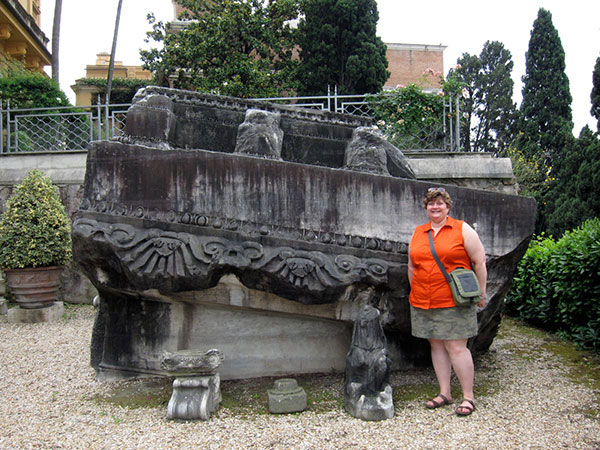 My sabbatical began in January with travel to conferences, giving a pair of talks for the Archaeological Institute of America (in Nashville and Edmonton), and conference on teaching Pompeii at Wabash College. However, the most interesting part of my leave began only near the end of the sabbatical period, when I arrived in Rome. I am staying in a small hotel on the Quirinal until June 14, when I will move to the American Academy on the Gianicolo. These are some of the highlights from my first 10 days in Rome... 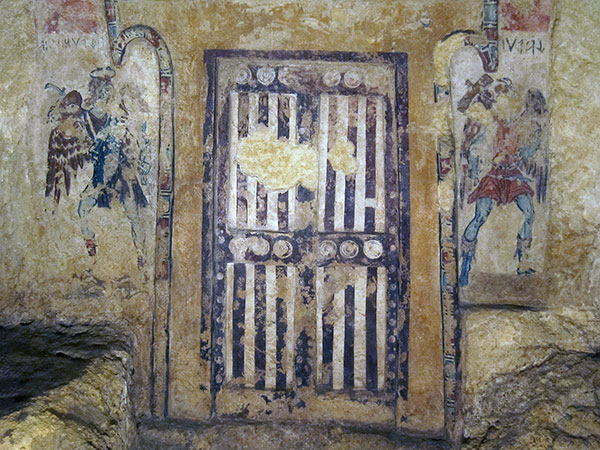 My neighborhood is defined by the massive Finance Ministry building to the south, by the fragments of Aurelian’s Wall (271-5 C.E.) to the east, by the Villa Albani and Parco Borghese in the north, and by the Via Veneto leading to Piazza Barberini to the west. There are a number of good restaurants here, and at lunchtime, they are filled with mid-level bureaucrats from the ministry. The American Academy is on the opposite side of town, across the Tiber River, on the Gianicolo, the ancient hill of Janus. The commute to the Academy takes anywhere from 45 minutes to slightly over an hour, depending on traffic and the mood of the ATAC bus drivers. Riding Bus 75, I am whisked past the Baths of Diocletian, the Colosseum, Palatine, Circus Maximus, and Pyramid of Cestius on the way to Trastevere and the Janiculum. At the Academy library, I find my desk, Tavola 31, where I will be working for this last bit of my sabbatical, when I’m not out visiting sites and museums. 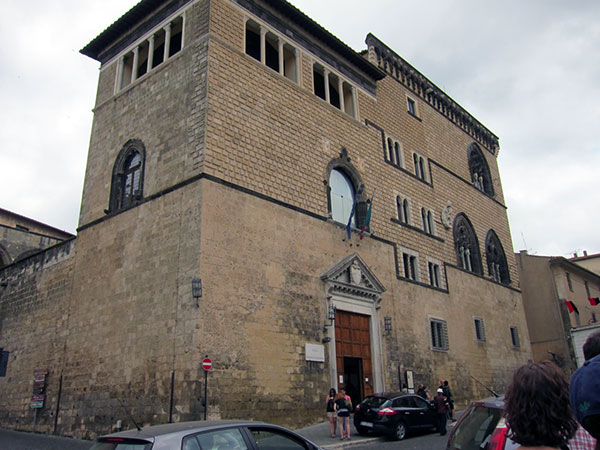 Today I have hitched a ride along with the summer program of the University of Georgia to Tarquinia and Caere (Cerveteri), two Etruscan sites renowned for their spectacular tombs. The Etruscans at Tarquinia created underground chamber tombs decorated with brightly colored frescoes depicting banqueting and the occasional demons of the underworld, such as Charon, the blue-skinned guide to the after-life. The Caeretans built magnificent tumuli housing carved chamber that imitate domestic architecture and furnishings from everyday life. Two Tulane students who were in my fall course on the Etruscans are participating in the UGA program, and it was wonderful to see their excitement at seeing the tombs in person. 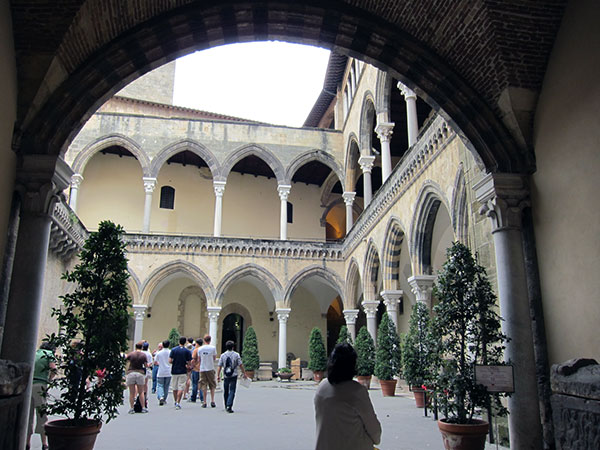 For 16 years I have tried to get into the Colonna gardens, a private property on the western edge of the Quirinal hill. The gardens are connected to the Palazzo Colonna at the foot of the hill next to the church of the Santi Apostoli. The Colonna family has occupied this area for more than 1,000 years, and throughout the Medieval and Renaissance periods, this family was one of the most powerful in Rome. For me, the Colonna gardens are important because they rest upon an ancient Roman terrace that supported a gigantic temple built in the early third century C.E. This was the Temple of Bacchus and Hercules constructed by the Roman emperor L. Septimius Severus, and I have been working on an article about it for the last three years. Archival records show that the Colonna family used the temple’s ruins as a quarry. They let out contracts to builders in Rome. Material from the temple ended up in such notable projects as the Villa Giulia, designed by the architect Vignola. 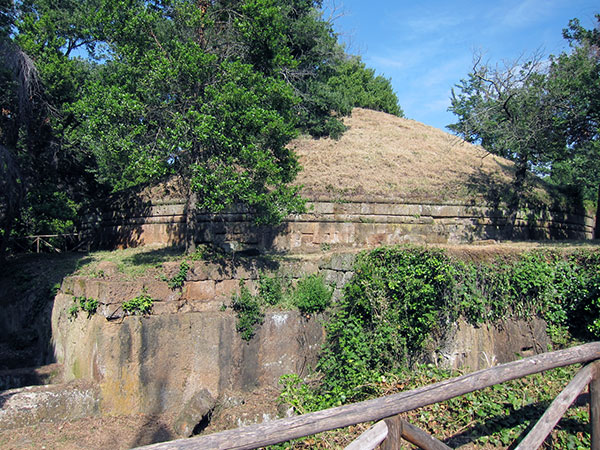 Today, at 9 am, my long desire of seeing the temple’s fragments is finally realized, thanks to the assistance of an Australian colleague, Clare Rowan, who has been at the British School in Rome this year. The Colonna property manager, an elegant gentleman, greets us at the gate. We were led up three flights of stairs then down another to a terrace that rests on Roman-era concrete substructures that once supported the portico of the temple. The view from the terrace is magnificent and highly privileged. You can see the domes of Il Gesù, San Andrea della Valle, and Saint Peter’s Basilica. For me, however, the true excitement was seeing at long last a small group of marble blocks, two of them enormous in size, that formed part of the uppermost structure of a temple that was probably the largest ever constructed in Rome. The columns for this temple were about 72 Roman feet high. 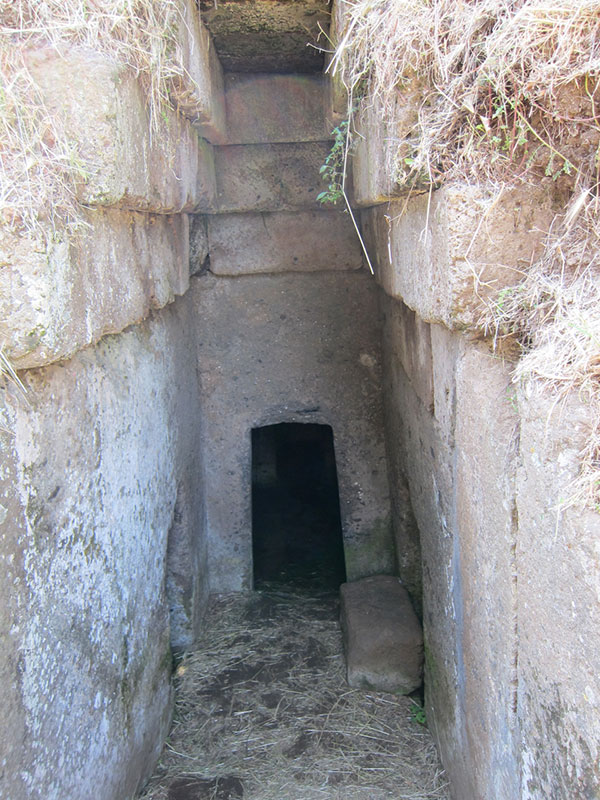 Dromos, or entryway, to an Etruscan tomb. Banditaccia Necropolis, Caere.

During our visit, Clare and I are able to walk around all sides of the pediment block. We can see where the ancient masons started to carve holes for a lifting device called a lewis, but then changed their minds about the placements – the shapes of two have been traced out but never finished. This block preserves the angle of the pediment, and from this one can predict its height. We know that this piece formed the corner of the rear pediment because it is represented in Renaissance sketches, still standing in its proper position. Years ago, as a fellow at the American Academy in Rome researching and writing my dissertation, I was fortunate to see firsthand a set of illustrations made by Alberto Alberti, an architect, military engineer, and sculptor, who came to Rome in 1547 and between the years 1570 and 1598 executed a fine series of drawings of ancient monuments. Alberti’s work is meticulous, and on the first folio of his illustrations he includes a scale for his measurements, a detail of immense value. He saw the temple remains when the southwest rear corner was still standing to its full height.

We were allowed to look at the blocks for about 40 minutes, but we had been told that photography was not allowed. I pleaded for one photo and, miraculously, was able to get two!

If the rest of the summer goes as well as these first 10 days, then it will be a marvelous finish to my sabbatical period. 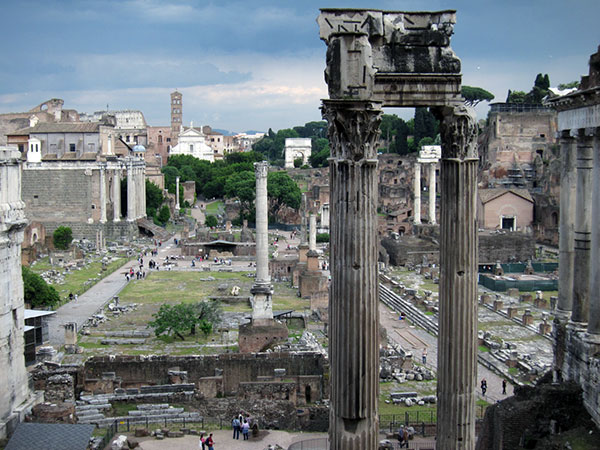 View of the Roman Forum, seen from the Capitoline. 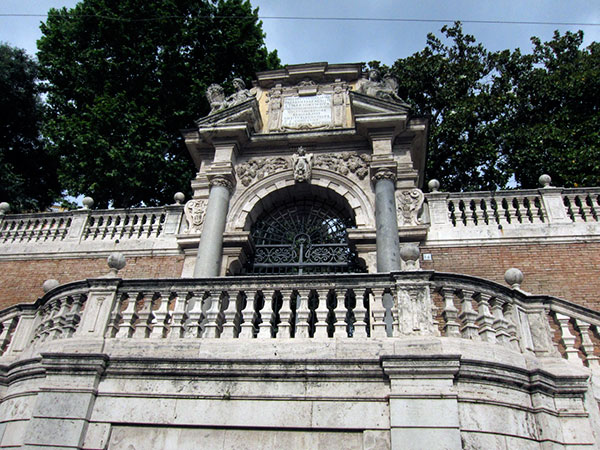 Entry portal to the Colonna gardens on the Quirinal hill, Rome. 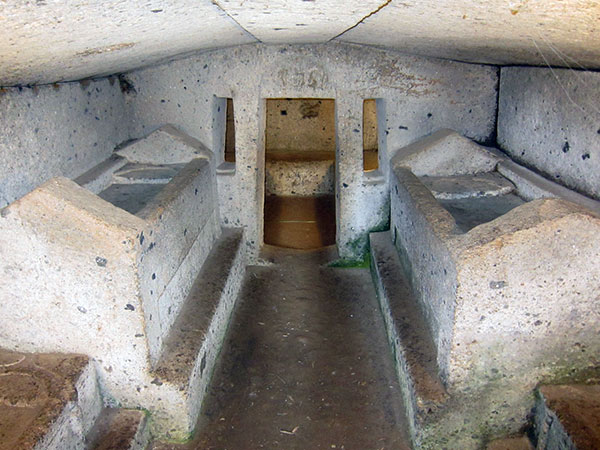