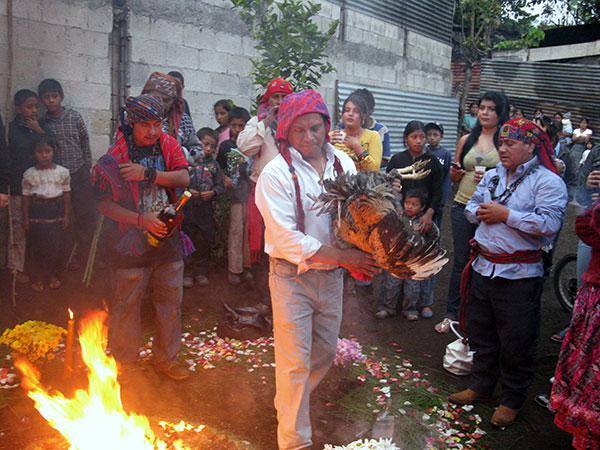 Tojil dancing the still live rooster around the fire. Ma Kikotem is on the side.

Yesterday, I went out to Santa Catarina Barahona to help my friend, Tojil, celebrate another year of his service to Ma Ximon. Tojil is a daykeeper, a Mayan ritual specialist, who was invested with his cane of office through the spiritual agency of Ma Ximon. Just who or what Ma Ximon is is highly contested. One school of thought associates him with pre-Columbian earth lords, wealthy beings who live inside mountains and other natural features, and who can be bargained with to provide money or economic opportunity to client-petitioners. Some claim that this is a Mayanization of San Simon; some associate him with Judas Iscariot. Others see him as an avatar of Beelzebub.

Those who get their mystical power from him reject these slurs. Tojil, who is a teacher in the Tulane Kaqchikel summer program, explains to us that ximon means "tied or bound one". Ma is the title of respect given to adult men. One of the most powerful images of Ma Ximon is that in the cofradía dedicated to him in Santiago Atitlán. This roughly carved figure is "tied" in myriad colorful bandanas. More commonly, Ma Ximon is represented as a light-skinned, dark-haired man, wearing a black boater hat, a black suit and white shirt. Ma Ximon, regardless of representation, loves to smoke and drink. Petitions to him should be accompanied by gifts of alcohol, cigarettes and cigars. Ma Ximon is also known as the Great Grandfather, Rilaj Mam. "Historically", he was Francisco Sojuel, a Tz'utujiil from Santiago Atitlán. He seems to have lived in multiple time periods, but in each he was a great help to the people, giving them good advice and protecting them from the abuses of invaders, whether these be Spanish soldiers under Alvarado, or the government troops during the 36-year genocide "concluded" in 1996. In each incarnation, he was captured/ "bound" several times and was eventually hanged. (His image in Santiago today is hanged on the Wednesday before Good Friday.) However, in each case he was met, walking out of town, by a townsman, who then reported that Rilaj Mam would return when needed to help his people and was always available through petitions for counsel. 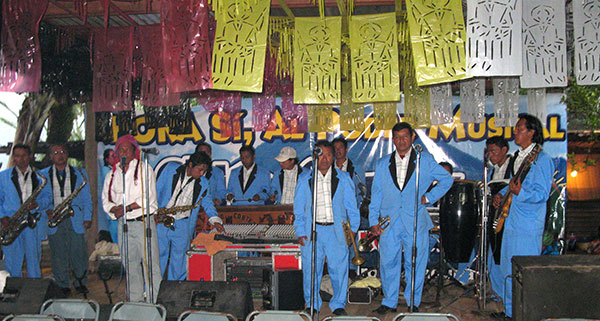 Tojil works for his spiritual clients under the aegis of Ma Ximon. Yesterday he gave thanks. When I arrived at his house around 3:30, the ceremonial fire was already lit, though the ensarte incense disks and intersperse cigars where just starting to catch. Four large candles marked the planar cardinal points. The central axis candles (green and blue for earth and heaven) had already been consumed. A veteran daykeeper stood behind each of the cardinal candles deeply immersed in prayer. Others were interspersed at the cross-corners, with more junior daykeepers filling the interstices. My friend and colleague from SUNY-Albany, Walter Little, tried counting the number of daykeepers, but as the circle membership ebbed and flowed it was unclear. At any one time there were at least 13, we determined, 13 being the numeric coefficient of the 20 named days in the ritual calendar. Some of the daykeepers had come long-distances to participate, and had somehow avoided the protests that were blocking the PanAmerican Highway. My compadre, Ma Cristóbal, stood as the south sky-pillar. The eastern cardinal point was upheld by Ma Manuel, from Chwi Lay (Chichicastenango).

Tojil came out of the circle to welcome Walter and me, give us some rum and lead us to his Ma Ximon altar. A spectacular San Antonio Aguascalientes style ritual shawl served as the retable. On an altar/throne sat a life-sized Ma Ximon. Below him on a chair sat a slightly smaller image. To the north sat a third, again smaller, image. Flanking the central figures sat two twelve inch-high figures, one of which was later given to a celebrant, who had renounced Ma Ximon, tried a non-eclectic version of Catholicism, but returned to the fold. The altar was festooned with flowers; the area around the foot of the altar was ablaze with votive candles. All night long, the faithful kindled new flames and offered thanks, while seeking new boons. Plastic origami-ed streamers ran from the altar to the band-stage, where Chito Cortés and his Marimba Orchestra were in full swing, blasting sones (The son is the archetypical Mayan dance rhythm, time. Sons were played throughout the ritual portion of the evening.) through their 20 3'-high speakers. 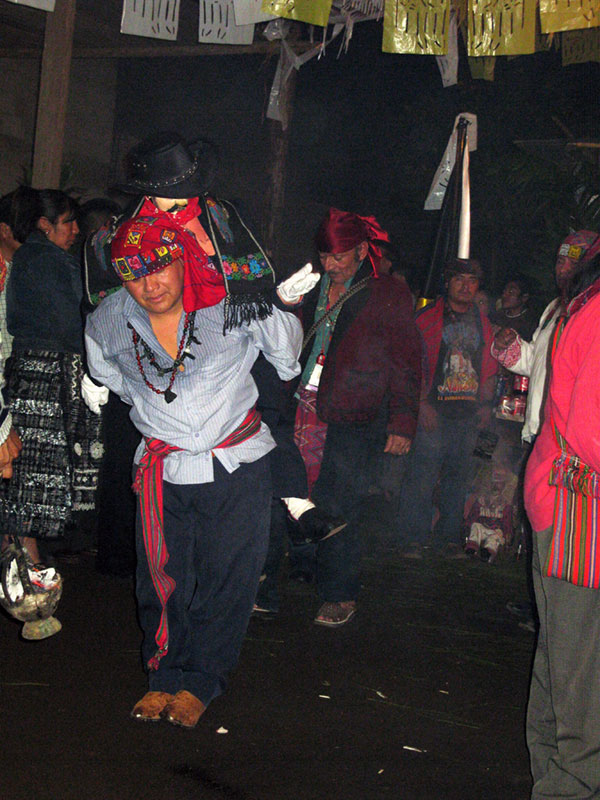 After Walter and I had offered our rum to the various Ma Ximon's at the central altar, Tojil herded us back to the ritual fire. After the initial invocations and individual petitions, Tojil brought out a rooster. Holding the rooster by its wings and feet, Tojil danced it around the fire. Then the Western cardinal daykeeper joined him in the dance, ending at the southern pillar, where the bird was killed. The Western daykeeper twisted the head until it came off and tossed the head into the fire, careful to direct the arterial blood spurt into the flames. He and Tojil then danced the bird around the fire again, expressing the blood into the fire. The southwestern cross-corner daykeeper and the Western avatar then butchered the bird and fed the pieces to the blaze, while Tojil danced the heart around the circle. Once Tojil had completed four circuits, he took the heart to the main altar. Afterwards, we all began dancing in a circle around the fire. As the fire began to die down, the ceremony was moved to the central altar. The principal ajq'ija' (daykeepers) from the sacrificial fire were joined by some late-comers. Tojil and Ma Kikotem, the most cherubic of the ajq'ija', took the second largest Rilaj Mam figure from his seat. Ma Kikotem helped position the manikin on Tojil's back. Chito Chavés and band struck up a son. The elder daykeepers censed the dance floor around and in front of Tojil; the prodigal devotee carried the silver-tipped cane, symbol of Ma Ximon's authority. After several rounds of the dance floor, the image was passed to another daykeeper, and so on, until all had danced with him. The three women ajq'ija' took very short turns, for which Ma Kikotem later scolded them over the loudspeaker. When Ma Ximon returned to his chair, Tojil's family began to bring out trays of food. By this time there were over 200 people seated in the gallery, and another fifty scattered out in the patio area near the fire. Some fifty more stood in the street, but as gawkers, rather than participants, they were not served food. As the night wore on, some guests left; but others kept arriving. People were still being served supper when I had to leave at 11 p.m. The meal was estofado (recipe), rice, and a spicy pickled salad of jalapeños, carrots, green beans, onion, cauliflower and broccoli, served with tortillas. The drink was a hot fruit punch, and of course hard liquor and soft drinks flowed. The Coca-Cola ran low early on, so I began to worry about dehydration and was resolved to try another liquid, when another three liter bottle miraculously appeared. By the time I got across the dance floor to claim a serving, they were down to the last glass. 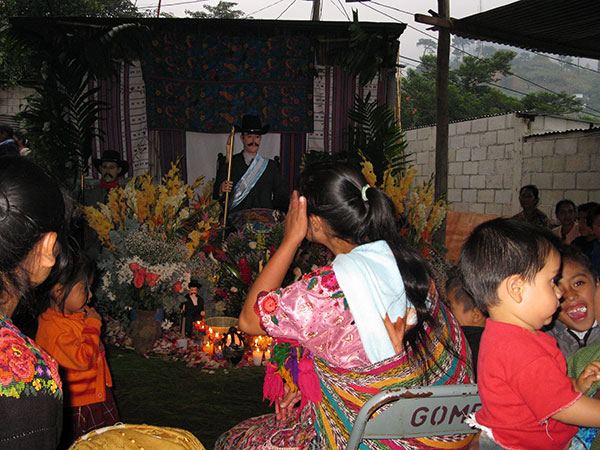 Folks seated in front of the Ma Ximon altar.

Luckily, Mokchewan, a friend from Tecpán (Iximche'), had come to the party, joining the fire circle a bit late. We ate together and as soon as the after dinner music started we took to the dance floor. The son had disappeared from the play list, only to reappear again as a signal that the night was ending. The social dance music was mostly merengue. I like merengue, but I also like a little variety in rhythm. After about 2 hours of straight merengue, I was delighted to hear a cumbia beat. Chito et al only graced us with one cumbia, but they did play an occasional corrida, which broke the merengue monopoly from time to time. Around 11 p.m. one of the band broke out his accordion. I had a "Louisiana nostalgia" moment, but there was not a two-step, broken-leg, waltz or zydeco number in sight or hearing. Still I thoroughly enjoyed the 5 hours of dance I managed to get in before the last ride back to Antigua left.

We rode home in the back of a pick-up. I had come prepared with a fleece and a heavy cotton shawl to buffer my sweat-soaked clothes from the whipping cold night air. My cotton belt was still sopping this morning. I washed all my still-damp clothing, including my sandals, this morning. I was still smiling from the wonderful afternoon and evening as I hung things on the clothesline.