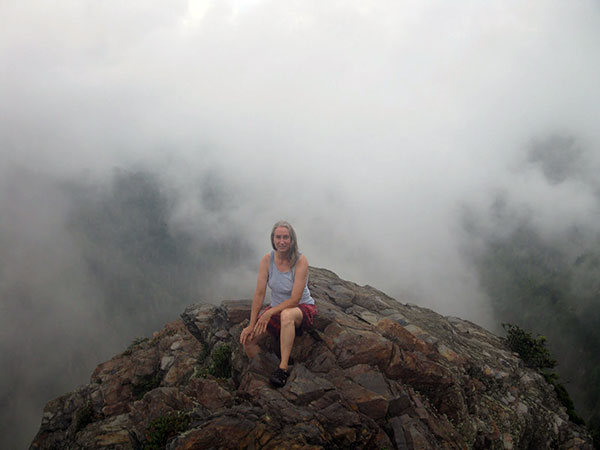 Judith Maxwell out on the tip of Charlie's Bunion

I returned to the US, New Orleans and Tulane on Thursday night August 5 to find the Anthropology Department ensconced in a new-to-us and newly new-ified building, Dinwiddie Hall. Friday I began unpacking with a vengeance and a plan: find the books I need for the courses I'm teaching this semester. Thanks to the wonderful packing job done by Joyce Bennett in my absence, I found everything fairly rapidly and was able to put together my syllabi. On August 12, my co-PI Ajpub' García Ixmata' arrived. On Friday and Saturday we crammed in near final revisions of our book on Mayan sacred space in Guatemala, a book targeted at the growing body of daykeepers (Mayan ritual specialists) in the country. On Sunday we headed for the hills, but this time not his peaks, crags, cliff-faces, caves and rock overhangs, sacred spaces with active Mayan altars, but my hills, the green, misty knolls of the Appalachians, hills I grew up in, hills that lift me up. 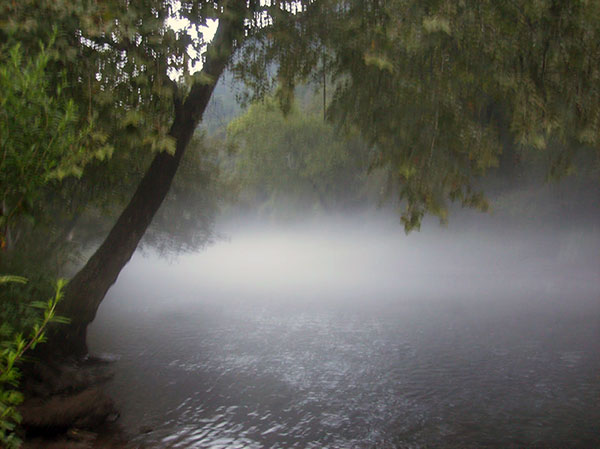 The Ocoee River at dusk

Nathalie Dajko, a colleague in Linguistics and Anthropology at Tulane, accompanied us on this adventure. She was driving as we neared the Smokies, fortunate since I was getting so hyped that I was bouncing around in the back seat, pointing out sights to the left, to the right and behind us and then enjoining Nathalie not to look, but to drive. Coming in from the southwest, we drove for miles along the Ocoee. Rafters were pulling out as we came by, the whitewater roared and beckoned. Up above Ocoee Dam number one, the river calms and at dusk "steams"; fog rose mystically off the water. Nathalie found a place to pull over and we clambered down the banks to splash along the edge and peer into the fog. 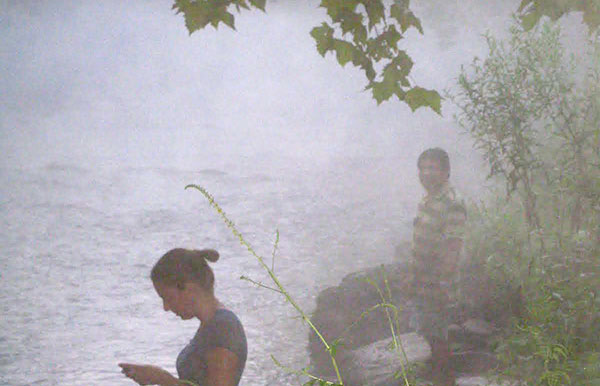 Ajpub' and Nathalie beside the Ocoee at dusk

We reached Cherokee after dusk and I found myself disoriented, the town I had known, stretched out along the "strip" (TN 73) that leads into the Great Smoky Mountain National Park, was superseded by a glitzy array of chain hotels and the Cherokee Harrah's casino. I had to ask for directions to the museum, knowing it was on the old roadway. We found it and found a "cheap" motel, a motel that backed up on the Oconoluftee River. This was what I'd wanted: a place to spend the first night next to this stream, water carrying life and history through the Eastern Cherokee reservation. I dropped my overnight bag and climbed over the porch railing to reach the riverbank. I was soon joined by Ajpub', who, attuned to spiritual energies, felt the weight and presence of the Cherokee ancestors. He sent me back for cigars. (I had explained to him that we would visit many places made sacred by the actions and lives of the Cherokee and of others who had come "unto these hills" but that we could not do a xukulem, a Mayan style ceremony, as we would not be allowed to burn offerings, either on mountaintops, or by rivers. He had replied, po yojtikïr yojsik'an "we can smoke". (The smoke of tobacco, sacred to Native Americans in the US and in Guatemala, offers a channel of communication with the spirits, both immanent and ancestral.) Nathalie saw me dig out my cache of Guatemalan single-leaf roll cigars and deduced that a "smoke" was in the offing and offered to join us, a decision, she regretted about halfway through her cigar. She hung in there finishing the bulk of the stogie, but ending up seated with her head between her knees. Ajpub' smoked down his first cigar in a brief spate of ash and quickly lit another. We watched the ash and the burn trail through the cigars show us the presence of the spirits, the prospects for our "work", and the combined (ours and theirs) hopes for the future. At the end of the smoke (Ajpub' finished off three cigars, I made it through two, and Nathalie one), we clambered back up the bank and to bed.

Monday morning we headed into the Park, got a campsite, dashed back to Cherokee for groceries, packed a lunch and then headed to my pilgrimage site. In August 2005, just before Katrina, my mother died. Two friends and I had carried her ashes and my father's home to Tennessee. After burying token handfuls in the family graveyard, we had taken their mixed ashes to the Little Pigeon River, the resting place designated by my Dad. Ajpub', Nathalie and I returned to the spot I'd chosen, a small pool and a rustling rapid. We did a small ceremony here, offering cornmeal (a North American tradition) and another smoke (Nathalie sat this one out). Then we started up Chimney Tops, a twin-topped peak that had been a favorite hiking goal for my folks and me when I was little. We planned to make another offering at the top, and I was a bit worried that other climbers of this popular hill would gape and gawk. We had a lovely walk up the path, one much "improved" since my childhood clambers. Nearing the top, we reached the edge of the treeline, above us loomed the jagged slate teeth of the final rock-climb. Storm clouds blew in on a cold wind. Rains came and the temperature plummeted. The hikers who had scaled the rocks scrambled down, others just arriving (like us), hunkered down for a while, but soon tired and left. We took refuge in the lee of a tree and ate our lunches hoping that the rain would let up and let us up. 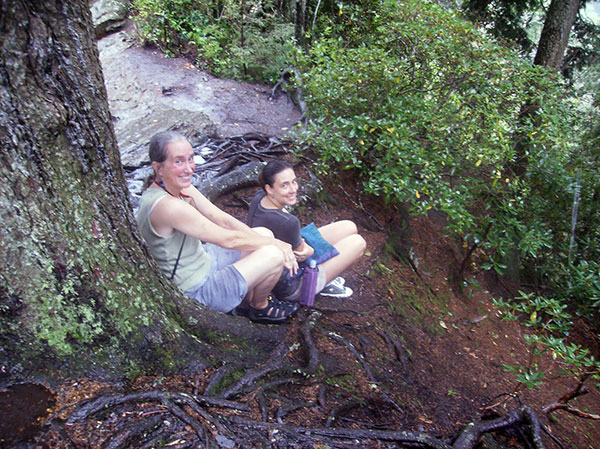 Nathalie had a close encounter with a hungry red squirrel, who after successfully begging half of Nathalie's sandwich started to pat her down looking for more goodies, which brought Nathalie quickly to her feet and the squirrel scurrying off to a safe distance. The rain started to lighten up a bit; I looked up to where Ajpub' had been standing only to discover that he had already started up the rockface. Nathalie and I scrambled to our feet and started after him. A few false starts later, we had found a way all the way to the summit. As we scaled the last 25 meters of nearly perpendicular stone, Nathalie pointed out the folly of climbing to the top of a bald mountain during a thunderstorm. Indeed, though the rain had retreated, clouds roiled all around us and thunder grumbled along the peaks. Ajpub' never considered it a problem, convinced that we were protected by a power umbrella. We made it, unlightning-ed, to the top. The clouds rose enough to give us a view of the nearby slopes. We made the cornmeal offering, but were unable to smoke, as the cigars were well and thoroughly soaked. We did, however, thanks to the rain have the summit to ourselves for the ritual.

Back in camp that night we tried drying out some of our clothes by the fire, but basically what got drenched Monday stayed wet for our three day stay. Still we had a waterproof tent and a tarp over our cooking/eating area, so we could enjoy the camp. Nathalie introduced Ajpub' to s'mores, a great American camping tradition. We considered telling ghost stories with our faces underlit by flashlights, but the translation barrier nixed that. 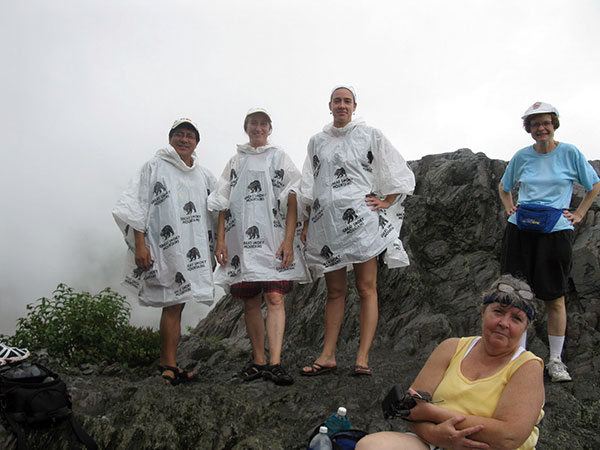 At Charlie's Bunion, our trio plus hikers who beat us there, Marcie and Diane

The next day we made a "kitsch" run into Cherokee. Ajpub' bought important mementos for his family. I bought a much-needed thimble and Nathalie bought a black bear back scratcher. We all bought light plastic rain ponchos, emblazoned with "Great Smoky Mountains" and black bears; these were lighter and easier to schlep that the heavy duty camping raingear I'd packed and then left in camp when we hiked, opting out of the extra pounds and into getting doused. We then headed out for a hike out to Charlie's Bunion, another bald rock overview of the hills, this one accessed along a section of the Appalachian Trail. Nathalie did the hike in flip-flops, a feet feat in itself. She got lots of head-shakes and some comments from fellow hikers, most of whom were in Danner's or similar boots. It was raining even when we set out on the trail, so our brand new raingear got an early baptism. Our trio of tourist ponchos drew more remarks, including the inevitable, "Bless your hearts!" Again the skies smiled on us, clearing when we reached the rock knobs of the "Bunion", but they soon clouded up and rain resumed as we made the return trek. 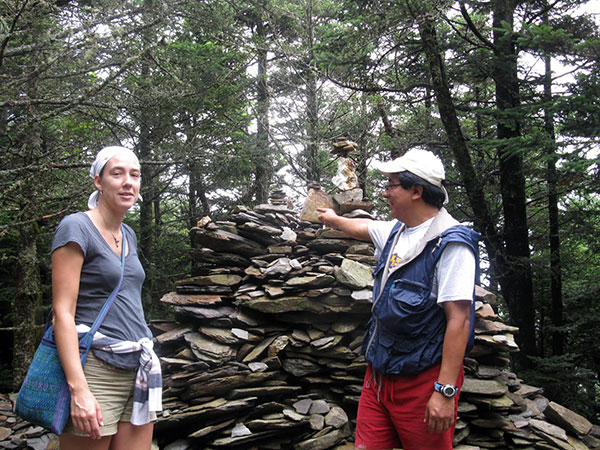 On top of Mount LeConte, highest peak in the Smokies, we follow the tradition of leaving a personal stone of the cairn. Ajpub' points to his.

For our final day, I took us via the Alum Cave Bluff trail up Mount LeConte, the third highest peak in the Smokies. Billed as the most beautiful trail in the Smokies, Alum Cave Bluff did not disappoint. The first section ran along Alum Creek. Next the path climbed to the Cave Bluff and finally wound to LeConte's summit. We continued past the famous Lodge (a series of froe shingle cottages) to the apex, marked by a cairn of stones to which each new hiker must add. We dutifully selected rocks to add to the jumbled barrow. Then we hiked back to the Lodge, where we bought lemonade and enjoyed our lunch and the view from the front porch. I wanted to check out the view from the bluffs on the other side of the ridge, a mere .2 miles more, and was surprised to learn that neither Nathalie nor Ajpub' were interested. I left them watching the alpacas (pack animals used to bring supplies up for the lodge, there is no road access) and the Smoky vistas. When I got back, we started back down the hill. Twenty minutes down the trail a hiker on his way up warned us of a bear around the bend. Sure enough as we rounded the crook of the path, we saw a black bear enjoying the blackberries alongside. Having denuded the pathside bushes, the bear headed briefly in our direction tempting us to ignore the "don't run" injunction in bear-encounter-lore, but he soon found another tasty patch off the path to our left, so we were able to scamper past and on down the trail.

That afternoon we treated ourselves to a trip into Cherokee to a RV campground that rented showers. Refreshed we made it back to our tent home in time to get a fire going (Nathalie is the queen of fire building) and have dinner before the rains returned. All night long the rain encouraged us to enjoy the comfort of the tent, but by dawn the skies cleared and we cleared out, packing up and heading back south to New Orleans, Tulane and the start of Fall term.

Ajpub' has returned to Guatemala and his research at the Universidad Rafael Landívar. Our study of Mayan sacred spaces continues, as we strive to document and gain protection for these sites. But next time we scale a crag in Maya-landia, we can recall easier hikes up kinder, older hills.