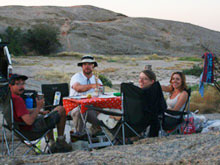 The Central Namib Desert of Namibia is among the most inhospitable places on planet earth. This region receives less than two inches of rain annually and most rainfall takes the form of major large storms spaced out over the course of years. In a normal year, most of this desert receives no rain at all. Interestingly, many forms of life persist in this harsh environment. Plant species, such as the national tree of Namibia, the welwitchia (Welwitchia mirabilis; a distant relative of the pine tree), deal with these conditions by having extremely slow growth cycles and through mechanisms designed to condense fog from the frigid Altantic Ocean. The Namib also supports a wide range of highly specialized animal species, including insects, lizards, snakes, jackals, hyenas, zebras, and antelopes. These animal species survive on tiny amounts of moisture gleaned from fog condensation or contained within their food resources. Shockingly, the Central Namib Desert was also the home of our earliest modern human ancestors.

Since 2004, I have been conducting archaeological research on the Middle Stone Age in the Central Namib Desert, often alongside a number Tulane University undergraduate and graduate student colleagues. The Middle Stone Age dates between 350,000 and 30,000 years ago and is the time period in which modern humans are known to have originated in sub-Saharan Africa, likely around 200,000 years ago. Our recent research has focused on a shallow rockshelter in the granite bedrock called Erb Tanks. Our fieldwork here has demonstrated that early modern humans had used the site by at least 130,000 years ago and the site is rich with the stone tools made by these early Namibians. We have also found fragments of ostrich eggshell, which were likely used as water containers.

In July, we made what is certainly our most important discovery yet at Erb Tanks: We found a slab of stone with an ocher painting of a human figure on one of its sides. Similar painted stones were found in Middle Stone Age contexts elsewhere in Namibia in the 1960s and are still considered among the earliest known works of representational art in the world. Our find proves that these earlier discoveries were not an aberration and that representational art was likely a pervasive element of later Middle Stone Age life, at least in the Namib Desert. In addition, we collected geological samples for dating techniques that were unavailable when the first painted plaques were discovered in the 1960s. These are currently being analyzed at the University of Georgia and, given their greater accuracy, I suspect that they will demonstrate that the Erb Tanks painting is significantly older than even the oldest cave paintings in Western Europe.

It is interesting to wonder why the Namib Desert was the location of this earliest period of artistic representation. It occurs to me that the early residents of the Namib must significantly innovated and adapted their lifeways in order to survive in this foreboding environment. In fact, we find evidence of these innovations in the tools these early modern humans made and the ways in which they used the landscape. I increasingly believe that the painting of portable stone slaps, and the symbolic thinking and creativity this practice implies, were aspects of the adaptations that allowed early modern human populations to survive in this hyper-arid region. I wonder if the Erb Tanks painting may be further evidence of the importance of communication and social cooperation among our earliest modern human ancestors – qualities that have been responsible for the success of our species from this time onward. 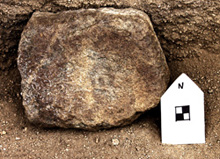 Archaeological research in the Central Namib Desert is challenging and our field camp conditions are quite spartan. We bring in all of our supplies, including food and water, and we must make very economical use of these while camping. In addition, the winter months between July and September are infamous for their strong winds blowing down from the interior plateau (similar to California's Santa Ana winds). It was also just our luck that we have had to endure two fluke rain showers during what is considered the “dry season!” Given these trials (and others), I am grateful for the help of all of my Tulane colleagues who have accompanied me the last few years!