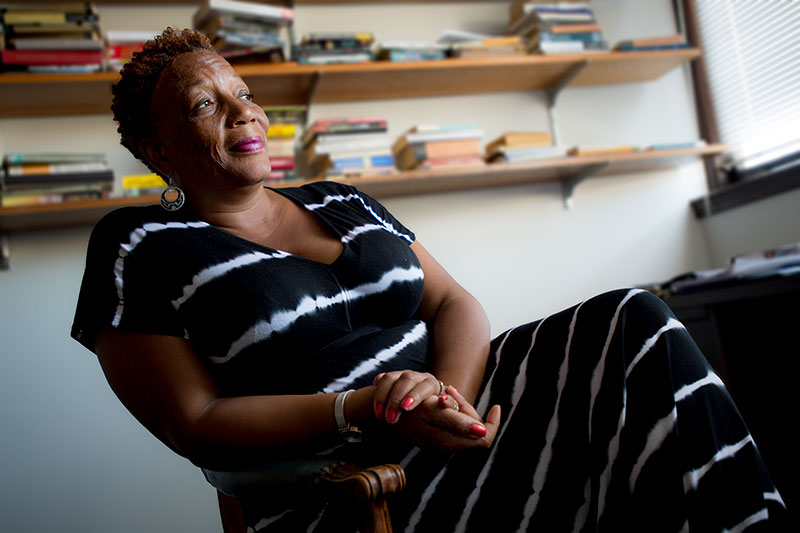 Bernice L. McFadden is the author of 10 novels and is the newest member of the creative writing faculty in the Tulane School of Liberal Arts. (Photo by Paula Burch-Celentano)

Celebrated novelist Bernice L. McFadden joined the School of Liberal Arts at Tulane this fall as a visiting assistant professor of creative writing in the Department of English.

McFadden, who has written ten novels, adds even more strength to the School of Liberal Arts’ phenomenal team of creative writing professors. Her work has won critical acclaim; she is a three-time Hurston/Wright Legacy Award finalist and the recipient of three awards from the Black Caucus of the American Library Association.

Aside from four years at boarding school in Pennsylvania, McFadden has spent her life in Brooklyn, New York and is eager to teach and write in a place with the energy and literary history of the Crescent City. “New Orleans is going to show up in a few of my stories I’m sure,” she says. “New Orleans is one of the cities I’ve always imagined myself living. I’m excited about the energy here.”

A writer of historical fiction, McFadden, in her most recent novel, The Book of Harlan, blends the story of her paternal grandfather with her research about the Harlem Renaissance and African Americans in the Holocaust.

“I’m actually a historian masquerading as a novelist,” says McFadden. According to the Washington Post review of the Book of Harlan,  “Each character in her large cast is vivid, and every turn of event is intriguing. Leaping from Harlem to the Holocaust and back again, it’s also a history lesson with a heart and lots of soul.”

“New Orleans is one of the cities I’ve always imagined
myself living. I’m excited about the energy here.”

McFadden is no stranger to taking risks to create literature that resonates. Her eighth novel, Gathering of Waters, is narrated not by a person but a town (Money, Mississippi).  Named The New York Times Editors’ Choice and one of the 100 Notable Books of 2012, the story uses magical realism, blending history and fiction to tell the story of the Mississippi flood of 1927 and the murder of 14-year-old Emmett Till. For her next work, she is stepping away from fiction to work on a memoir about her mother.

“Especially with art, there are very few rules,” McFadden says. “The rules that do exist can be bent or broken to achieve what you want to achieve. That’s what makes it fun.”