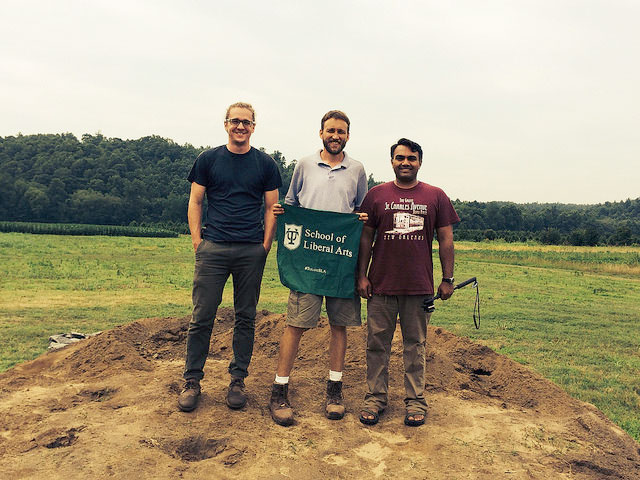 After marching with his men from the Spanish colony of Santa Elena, in coastal South Carolina, to the southern Appalachians, Captain Juan Pardo formed an alliance with the Native American community of Joara, in western North Carolina, in 1566. He founded a colonial town at the edge of Joara, and he named it Cuenca, after his hometown near Seville, Spain. He and his men built a fort, known as Fort San Juan, and Pardo and his men built five other forts in the Carolinas and eastern Tennessee in 1567 and early 1568. During the late spring of 1568, news reached Santa Elena that Native American warriors had sacked Fort San Juan and Pardo’s other forts, and only one of Pardo’s men is known to have survived the attacks. Fort San Juan and other Spanish colonial outposts in the northern borderlands of La Florida were abandoned, and the focus of Spanish colonialism in the American South shifted from exploration and military installation to missionization and trade. What did the fort look like? What did the colonial town look like? How did natives and newcomers at Cuenca, Fort San Juan, and Joara relate to each other and interact with each other? What happened to the town of Joara after the conquest of Cuenca and Fort San Juan? Archaeology at the Berry site, in western North Carolina, is unearthing clues about early encounters and entanglements between Spanish colonists and Native Americans in the southern Appalachians, in the northern borderlands of the Spanish colonial province of La Florida.

The site is located in a field in a rural setting near the town of Morganton, North Carolina, where field crews live while excavating during the summer months each year. We dig with shovels and handheld tools like sharpened masonry trowels, and we sift the dirt through hardware mesh cloth in search of artifacts. We transport sifted dirt from excavation squares and screens to heaps of “backdirt” that become large mounds during the course of our excavation seasons, and excavated areas are “backfilled” after we have dug them and documented them. It is not often that archaeologists have an opportunity to excavate as much area as we have at the Berry site, and there is much more area that we would like to dig. It takes much more time and effort to analyze archaeological finds than to dig them up, and we anticipate years of further study at Berry and other sites nearby.

Investigations from 2013 through 2016 have concentrated on Fort San Juan itself, as well as areas outside the fort, where Native American structures and the remnant of a large Native American mound are present. The discovery of the buried remnants of Fort San Juan itself in 2013 reached the pages of the New York Times, and Discover magazine named it #29 of the top 100 scientific discoveries of that year. Since 2014, we have uncovered sections of the moat and earthen embankments surrounding the fort, as well as posts from a possible log stockade inside the moat, and we have mapped the buried footprint of the fort through noninvasive geophysical survey techniques and more conventional practices of soil coring. In 2016, we uncovered traces of log posts and other deposits associated with structures inside the fort, and we plan to excavate more of the fort in 2017.

Our investigations from 2001 through 2012 concentrated principally on the area of the Berry site where, as we know from our excavations, people from the town of Joara built structures to house Juan Pardo and his men. Our study of structures and activity areas in the Spanish neighborhood of Cuenca is the basis for our recent book, The Limits of Empire: Colonialism and Household Practice at the Berry Site, published in 2015 by the University Press of Florida, and the basis for papers that we have contributed to journals such as American Antiquity, Historical Archaeology, and Southeastern Archaeology, and to scholarly books published by the University of Arizona Press and the University of Alabama Press.

Several Tulane anthropology majors participated in excavations at the Berry site in the summer of 2016, including Hannah Hoover (Class of 2018), Amber Thorpe (Class of 2018), and Tyler Michael (Class of 2017). Other Tulane anthropology students have participated in this project in the past, including Merritt Eller (M.A. 2010), Bee Geiger (B.A. 2012), Jayur Mehta (Ph.D. 2015), Ben Davis (B.A. 2014), Hannah Humphrey (B.A. 2007), Samantha LaValliere (B.A. 2015), and Hannah Orr (Class of 2018). Our participation in these activities has been supported by the Department of Anthropology, the School of Liberal Arts, the Committee on Research, the Carol Lavin Bernick Family Foundation, the Newcomb College Institute, the Honors Program, and Newcomb-Tulane College.

My colleagues and project codirectors are David Moore (Warren Wilson College, Asheville, North Carolina) and Rob Beck (University of Michigan). Our collaboration has made it possible to sustain a project conducted at a large scale for a relatively long time. David Moore conducted excavations at the Berry site in 1986, Rob Beck conducted surveys in areas nearby in 1996, and our project in its current form started in 2001. My role in our project emerged from my interests in the Native American cultural landscape of the American South and Native American responses to European contact and colonialism in the Americas—interests that I have developed and broadened since I came to Tulane as an assistant professor of anthropology in 2005. Our collaboration, and the diversity of students and volunteers who participate in our fieldwork, also gives our students the chance to interact with people from a variety of backgrounds and a variety of perspectives on how to practice archaeology.

The (mis)fortunes of Spanish settlement at Cuenca and Fort San Juan, and the conquest of the fort by the warriors of Joara, forced Spanish colonists in La Florida to abandon plans to maintain permanent settlements in the Carolinas and eastern Tennessee. This erasure of Spanish outposts from the colonial landscape in these areas of the American South created an opening for later episodes of French and English exploration and settlement, and it illustrates a case in which Native Americans were a dominant force in interactions with early European explorers and colonists in the Americas. What happened at the Berry site between 1566 and 1568 affected broader currents of European colonial history in North America. And we are digging it!