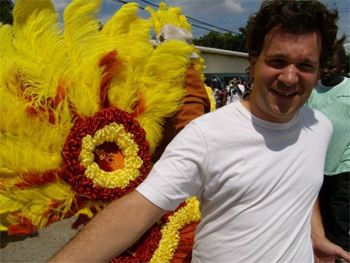 Matt Sakakeeny at a Second Line parade sponsored by the Lady Buckjumpers Social Aid & Pleasure Club in the Hollygrove neighborhood.

As an anthropologist of music, I use the methods of ethnography to locate the place of music in our everyday lives and measure its significance. While I feel at home in the archive, and perfectly content to sit at my desk with a stack of books, my research always begins out in the world, interacting with living, breathing human beings, whose experiences and stories direct the course of my work and, along the way, create an archive of “data” – interviews, pictures, videos, sound recordings, and notebooks filled with observations – for future historians. I cannot imagine a more compelling place for me to live and work than New Orleans, a city whose entire identity is grounded in its distinctive musical traditions.

Last year, with the support of an Awards to Louisiana Artists and Scholars (ATLAS) grant, I completed a book about the music performed in the most celebrated local tradition – the brass band parade – called Instruments of Power: Brass Bands in the Streets of New Orleans (forthcoming from Duke University Press). The brass band is a portable, acoustic ensemble that performs in jazz funerals (the time-honored burial processions that begin with slow, mournful dirges and end with upbeat dancing) and second lines (the weekly community parades sponsored by neighborhood Social Aid & Pleasure Clubs). Music is more than a soundtrack to these mobile festivals because musicians are responsible for regulating the entire movement of the marchers: the drums set the pace and the horns stimulate the dancers with improvised melodies. Recognized by fellow New Orleanians as community representatives, brass band musicians have also marched off the streets and onto concert stages and festival grounds, where they are applauded by audiences from around the globe as ambassadors of their hometown.

The vast majority of brass band musicians are young African American men from the inner city of New Orleans. While there is much to celebrate in the way these musicians have created opportunities for themselves by perpetuating black cultural traditions, there is also much to condemn in the way that they remain enmeshed in patterns of racial marginalization. Some were raised in housing projects subject to disinvestment and then demolition; many more attended under performing schools that do not offer an integrated music curriculum; and virtually all are unable to qualify for group health insurance. These musicians live a short distance from campus, they are invited here as entertainers, and a few have even attended Tulane, but on average their experiences with school, work, housing, and healthcare are qualitatively distinct from the relatively privileged students and faculty at the university. Though their work may offer them a degree of notoriety, as a rule the daily life of a working musician is equivalent to a cafeteria clerk, a custodian, or another less visible service worker. Their status as dual citizens – exceptional icons celebrated as culture-bearers and unremarkable subjects vulnerable to marginalization – makes them ideally positioned to diagnose relations of power. My book is then a case study of music’s integral place within political and economic infrastructures, which is too often obscured by music’s association with pleasure, transcendence, and the abandonment of critical evaluation.

The ability to undertake such a project in the place where I work, live, and play has allowed me to surmount the boundaries that often separate the domains of research, teaching, and service. I am beyond gratified that the culmination of my work, in the form of a book, will circulate out in the world where my research began, not only joining the stacks on my colleagues’ desks but also landing in the hands of the musicians, music industry entrepreneurs, and policy makers whom I write about.