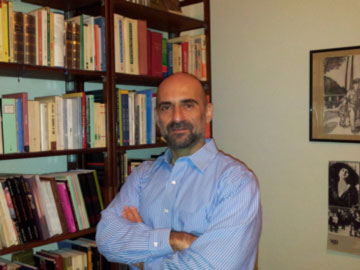 Founded by the Fascist government in 1935, Rome’s Centro Sperimentale di Cinematografia (CSC), one of the world’s acclaimed filmmaking schools, still conveys a feel of its historical origins. Its impressive linear architecture, spacious low-lit hallways, and rectangular interior courtyards evoke its status as one of Fascism’s emblematic enterprises for rejuvenating a withered film industry, among the various programs aspiring to Italy’s stride into modernity under the regime’s auspices. As the state’s sponsoring of the industry in the 1930s sparked an unprecedented growth in film production in Rome, the largest volume of material related to ‘30s cinema is kept in the CSC, making it an indispensable venue to scholars delving into that decade’s vibrant and politically complex film culture.

As a guest at the CSC, I tread between the film archive and the library.  The archive carries over 120,000 films, approximately 140 of which are 1930s Italian films available on readily accessible formats – video or DVD – for immediate viewing. Numerous 1930s films are also preserved on celluloid, which the archival staff transfers onto manageable formats upon request, thus ensuring the physical integrity of the celluloid collection. The library carries over 102,000 items on cinema, including the Italian film magazines of the ‘30s. If the films display a variety of genres, styles, and ideologies, the magazines attest to the complexity of this film culture, with their abundant reviews of new films, photographs of stars, fascination with Hollywood, and reverence to Fascism. The large diversity of material prevents you from formulating any sweeping generalizations about Fascist culture. The main challenge, in fact, is to reach a balance between generalization and specificity, avoiding monolithic theses yet grasping the uniqueness of this era’s culture.

My book project explores the negotiation between two concepts of modernism within Italian cinema. I examine the influence of Luigi Pirandello, winner of the 1934 Nobel Prize for Literature, whose theory of humor addresses the multifaceted nature of the psyche, identity, and reality, and the impossibility of defining such notions, leading to a literary style associated with high modernism and requiring rigorous interpretation. I also examine the influence of Hollywood cinema, recently theorized as vernacular modernism, a popular cinema defined by its classical form – thematic clarity, narrative linearity, closure – yet displaying the impact of twentieth-century industrial modernity in its strong sensory effects that exceed classicism, such as melodrama, slapstick, horror, and star glamor. My analysis of cinematic adaptations of Pirandello’s works investigates how popular cinema interprets humor, which is to say, how it transcribes high modernism into vernacular modernism. I also explore whether this phenomenon extends to popular films not directly inspired by Pirandello’s literature. Moreover, given Fascism’s aim to prescribe a solid notion of Italianness, I explore the subversive effect that Pirandello’s view of reality as indefinable may have had on a state-sponsored cinema.

La canzone dell’amore (The Song of Love, 1930), the first synchronized-sound Italian film and an adaptation of Pirandello’s novella In silenzio (In silence), translates “silence,” a metaphor of the angst and solitude of modern life, into a musical utopia. Especially noteworthy is the film’s portrayal of gender. The contrast between a seductive blond singer and a humble domestic brunette, typical of the era’s portrayals of bad and good, may be interpreted as two complementary facets of one, pointing to the dilemmas facing womanhood in modernity.

For the opportunity, during my 2012 research trip, to view rare films such as the above, I am grateful to a Glick Fellowship and a Lurcy Grant from the School of Liberal Arts, as well as a Levin Grant from the Department of Communication. The Glick Fellowship in particular allowed me to spend this academic year carefully reviewing written materials that I gathered at the CSC, as well as plan my next research trip in 2013.