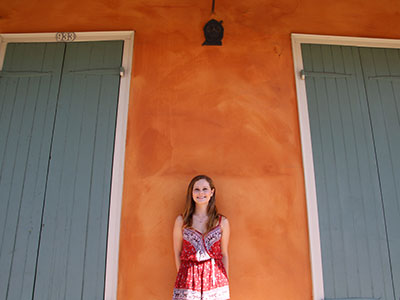 Leah Saffir, a SLA junior studying History and Political Science, is researching the Dolliole family who owned several pieces of property throughout the French Quarter in New Orleans, including this house at 933 St. Philip Street, as a part of the course.

Tulane students in Professor Emily Clark’s history class, New Orleans Free People of Color, are uncovering the past. Clark has researched and written extensively about New Orleans' French-speaking, mixed race descendants of enslaved women and their white owners, referred to as free people of color. As late as 1840, they made up 20 percent of the city's population. By diving into 18th- and 19th-century archives under Clark’s expert supervision, students have the unique opportunity to research free families of color who owned property in the French Quarter. At the end of the course, students will each produce an online module and share the stories they discover with the public.

“We have amazing archives here in New Orleans, going back to the very beginning of the 1700s, and they’re very rich,” enthuses Clark, the Clement Chambers Benenson Professor in American Colonial History in the School of Liberal Arts.

"The students' discoveries will be shared on New Orleans Historical, a web and mobile platform for sharing stories and scholarship about New Orleans. The site is a collaboration between the Communication Department at Tulane and the University of New Orleans History Department. The ultimate hope is to make the stories come alive through a walking tour (via an app) that will be unveiled at the annual meeting of the Organization of American Historians, which will take place in New Orleans in April 2017, says Clark."

"Professor Clark’s class is one of the most challenging classes I have ever taken; however, as a history major and an aspiring historian, it is also – without question – the most rewarding. As a junior in college, getting the opportunity to dig up a rarely explored part of history and creating a piece of work that actually means something is invaluable." - Leah Saffir

“Visitors to New Orleans can do a walking tour at their own pace and learn about this really interesting population,” remarks Clark. Many free people of color owned property or businesses in the French Quarter, and Clark steered student researchers to families that left traces in the archives. For example, the Tio family, a well-known family of jazz musicians, were involved in a court case in the late 1840s that denied the mixed-race children of a father of unmixed European descent and a woman of partial African descent an inheritance from their father.

“The court case goes on for pages and pages…,” Clark says “and there’s all kinds of fascinating testimony.”

Some of the free people of color who the class members are researching owned multiple properties and businesses in the French Quarter, some of which survive to this day. The Tio family, for example, ran a store on the corner of Jackson Square.

Working with the archives, holding an actual document signed by a person long ago, gives the students a “tangible connection to the past,” Clark states. “It’s a reminder that history is ultimately about people. The students in the class aren’t just reading about famous dead people in Tulane's history courses, they’re reading about actual people who aren’t famous at all. Ordinary people who lived in the past who left traces behind in the archives.” 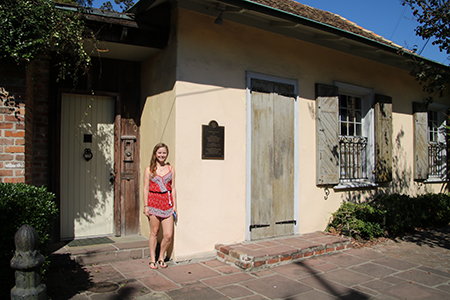 Saffir visiting the Dolliole Cottage located at 1434 Pauger Street as a part of her research. 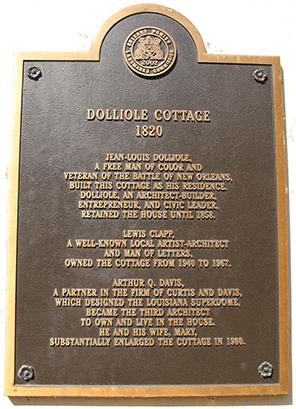 The Pauger Street cottage features an Orleans Parish Landmarks Commission plaque documenting the history of the cottage that Jean-Louis Dolliole built, as a free man of color in 1820.