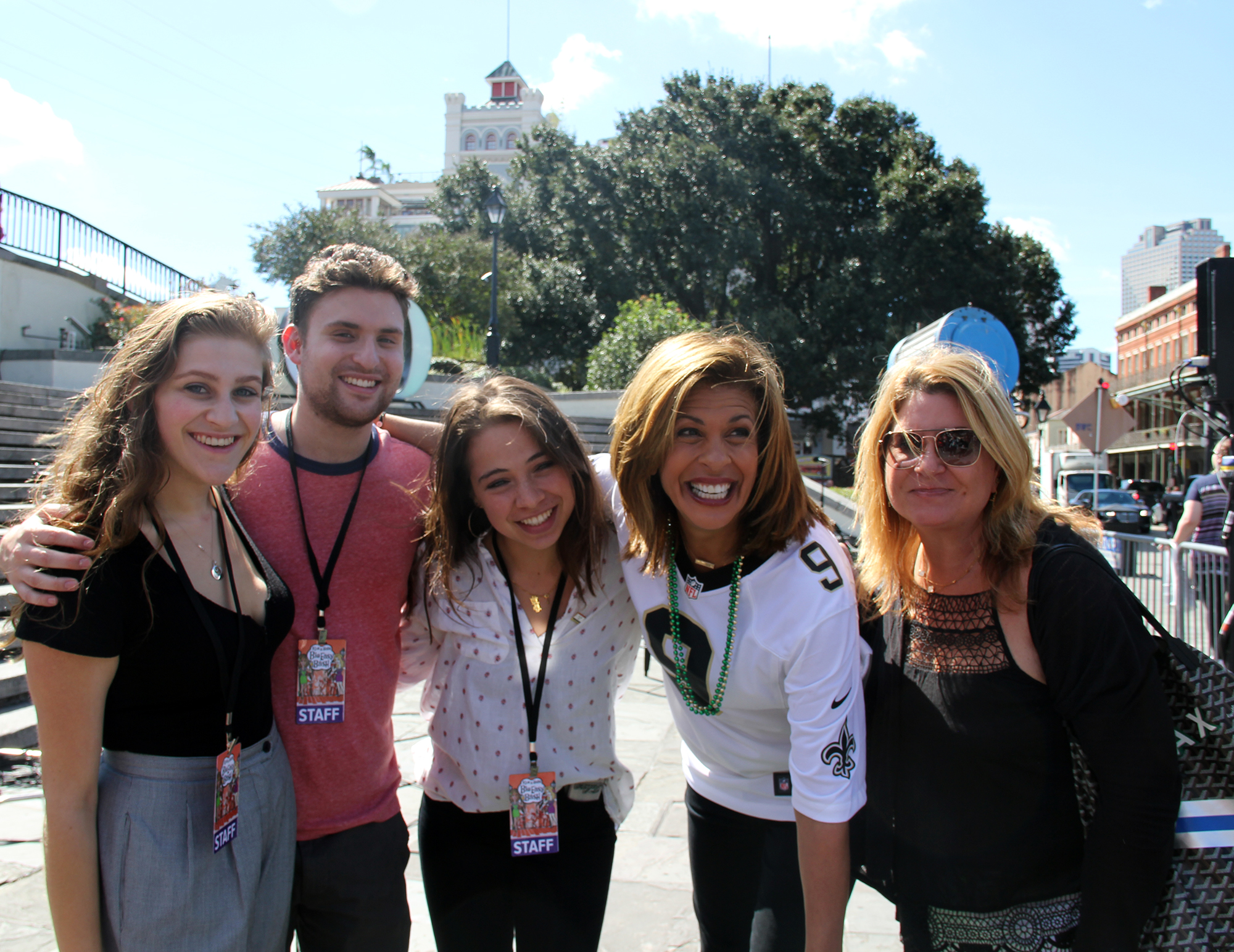 School of Liberal Arts alumna Jackie Olensky began working at The Today Show 22 years ago as the entertainment producer. Now Olensky is a food and lifestyle producer on the 10 a.m. hour of Today and also books the culinary talent. This fall, Olensky invited three Tulane communication students to The Today Show’s remote broadcast here in New Orleans. Working on the live set in Jackson Square was an enriching opportunity for these SLA students to gain insight into filming and producing a show for network television. In a recent interview with SLA’s Writer and Editor Emily Wilkerson, Olensky shared more about her exciting position at NBC and creating occasions for young adults to gain professional experience.

Emily: Tell me about your time at Tulane. What did you study?

Jackie: When I think back on my time at Tulane, I smile. My four years at the university and in New Orleans were amazing years filled with challenges, personal growth, fantastic experiences, and a stellar education. I began as a pre-med major but was drawn to the liberal arts and decided to study sociology. I also spent a semester in London where I studied architecture, fashion retail, and advertising.

Emily: And now you are a producer at NBC for The Today Show. Can you tell me more about this role?

Jackie: My role at Today has varied through the years. I began as the entertainment producer, booking and interviewing celebrities for projects they were promoting. Shortly after I started at Today, I became Sarah, Duchess of York’s producer and eventually Al Roker’s producer for 15 years.

Working with Al at this time was both fun and challenging. We covered weather events such as hurricanes, tornados, floods, mudslides, and fires, as well as food and entertainment. I was lucky enough to travel around the world for the Olympics and award shows like The Golden Globes and The Oscars, and I also produced many celebrity interviews including George Clooney in Cannes, Brad Pitt in London, and Johnny Depp in The Bahamas, just to name a few!

Currently, I work on the 10 a.m. hour of the show hosted by the amazingly talented Hoda Kotb and Kathie Lee Gifford, and my main focus is booking and producing chefs. Food has become so popular that we have a whole team dedicated to cooking on all hours of Today. Some of the chefs we regularly have on the show are Bobby Flay, Giada De Laurentiis, Scott Conant, and Martha Stewart. We also feature New Orleans-based chefs like Alon Shaya, Michael Gulotta, Isaac Toups, and Tory McPhail.  Whenever I have the opportunity to book New Orleans chefs, I grab it! And when I am not busy with food, I produce celebrity and lifestyle segments.

Emily: Was there a specific professor, class, or experience at Tulane that made an impact on your career?

Jackie: Dr. Robert Morse was my advisor and mentor, and he had the biggest impact on my career. I did an internship at NBC in New York City the summer before my senior year and he suggested I intern in New Orleans to see the difference between a local station and network television. I worked at WDSU, the NBC affiliate in New Orleans, and my first shoot was at Casamento’s Restaurant—maybe it was a sign that food would become my main career focus someday! Both of those internships were instrumental in my career development.

Emily: What do you hope our communication students will gain from their experiences on The Today Show’s set during the broadcast in New Orleans?

Jackie: It was such a pleasure to be able meet these students on our recent New Orleans remote. It was fantastic for my worlds to collide and to give these students a unique opportunity to work on a national television show. You learn so much on location—there is so much you can’t anticipate or control. And with many moving parts, often you’re faced with the challenge of making split-second decisions live on air.

Of course there is much to learn in the classroom, but being on set and getting a firsthand look at how the production comes together is extremely valuable. I hope the students got a peak at the possible career trajectories within TV, and I hope they had fun.

Emily: Why do you think a liberal arts education is important?

Jackie: Knowledge of humanities and liberal arts make you more well rounded and aware of the world. And when you work in TV, you are constantly producing content to educate, inform, and entertain people. This broader knowledge will help you each and every day.