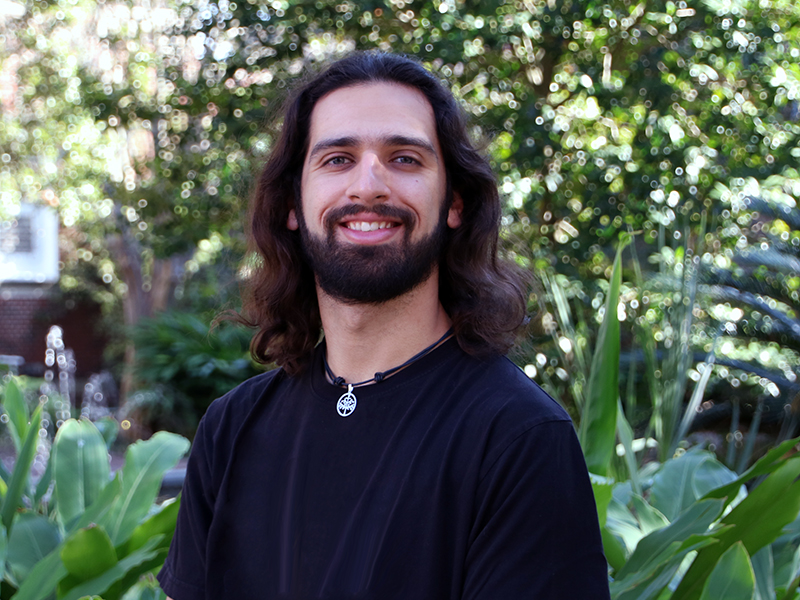 Rubén Morales Forte, a master’s candidate in Latin American Studies at Tulane University, has partnered with the museum in Dolores, Petén, Guatemala to share his online archeology database Maya Scripta and expand access to the region's history through the Mellon Graduate Program for Community-Engaged Scholarship.

“There is a huge discrepancy between indigenous and non-indigenous people in Guatemala,” explains Rubén Morales Forte, a master’s candidate in Latin American Studies at Tulane University. “My idea is that this disconnection is largely because of a lack of information regarding the region’s past, and my work aims to remedy that.”

Morales Forte studies archeology and linguistics, and about five years ago he and a few colleagues began creating the online database Maya Scripta. Their goal was to make Maya hieroglyphic inscriptions available to everyone for free. They also hoped to fill an important gap for individuals in Guatemala: while journals and articles on the subject exist, most of the research is presented in English, making it difficult for people in the predominately Spanish-speaking region to access accurate information about historical monuments and sites. Launched last year, Maya Scripta includes photos and drawings of many monuments in Guatemala, Spanish translations of texts associated with or inscribed in the monument, and the monument’s chronology (what time period it belongs to, and what time period it covers). Because Morales Forte and his colleagues collate the information from researchers at universities, Maya Scripta also offers bibliographic information for many of its entries.

While developing the database, Morales Forte moved from Guatemala to New Orleans to begin his graduate research at Tulane and immediately applied to participate in the Mellon Graduate Program in Community-Engaged Scholarship, which would allow him to link his research to community work in Guatemala. While Morales Forte knew that Maya Scripta would benefit many researchers, archeologists, and linguists around the world, he also wanted it to have an impact on education throughout Guatemala.

Over the last year, the two ideas began to merge as Morales Forte started working with the director and tour guides at the museum in Dolores, Petén, Guatemala. The museum in Dolores was a key component to giving a great deal of people—from professional archeologists to middle and high school students in the area—access to important historical information. With funding from his Mellon Fellowship, Morales Forte worked with the museum to create new billboards in an effort to increase visitors, offered workshops on reading hieroglyphics,  updated the current exhibition to include more details on monuments and multiple tablets to access Maya Scripta, and is now in the process of printing new didactic materials such as pamphlets. Since news coverage on Morales Forte and the museum’s work was published in the national weekly Revista D, the museum and the platform have seen an impressive increase in visitors and activity.

“Rubén Morales Forte's work is a model of community-engaged scholarship, putting the academy at the service of local populations as well as science,” explains Judith Maxwell, a professor in the Department of Anthropology. Maxwell, who Morales Forte met four years ago working with youth to revive Guatemala’s Kaqchikel language, advises Morales Forte on his master’s thesis, which explores how the knowledge gained through archeology and Maya hieroglyphic writing can be applied in a community-engaged project. Linking his interests has been key to Morales Forte’s time at Tulane. “I always struggled to decide if I would focus on linguistics or archeology, and the Latin American Studies Program at Tulane is the perfect place to combine both in this type of study because of its flexibility and interdisciplinarity,” said Morales Forte. “And the Mellon project really brings together all of my interests—archeology, ancient Maya linguistics and writing, modern Mayan languages, and community engagement.” 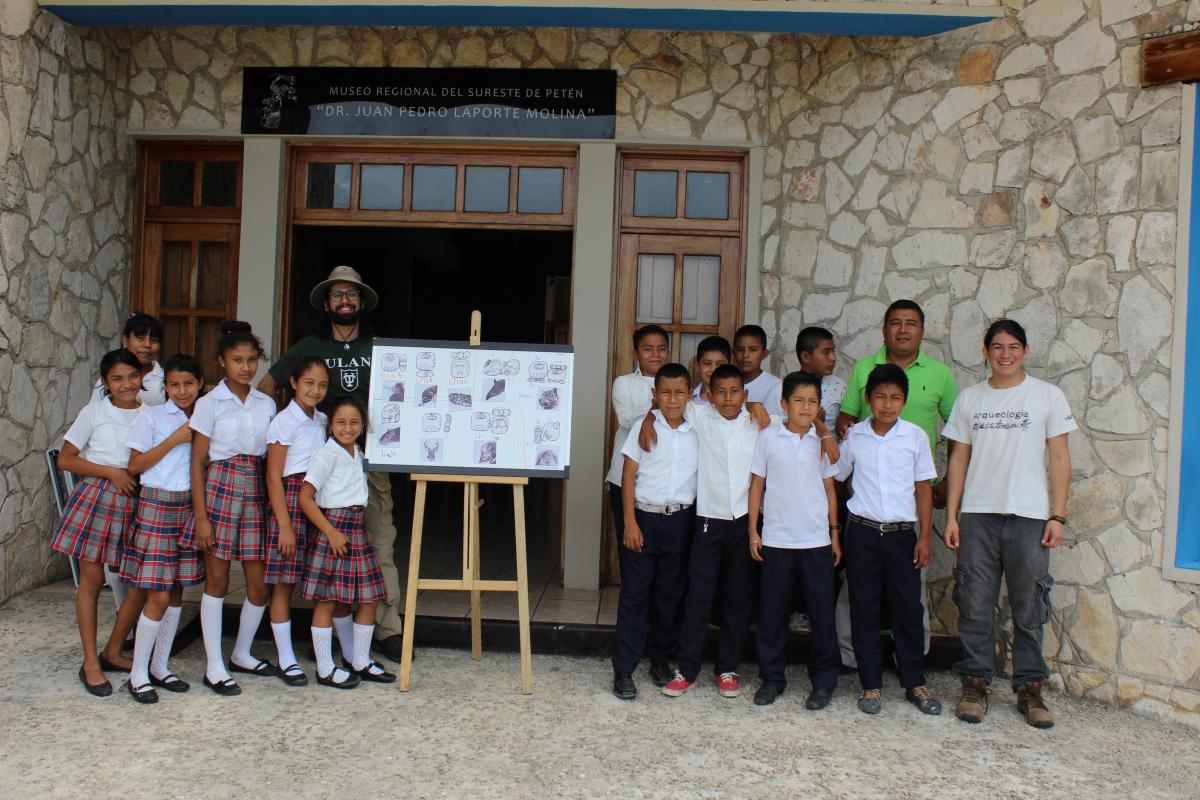 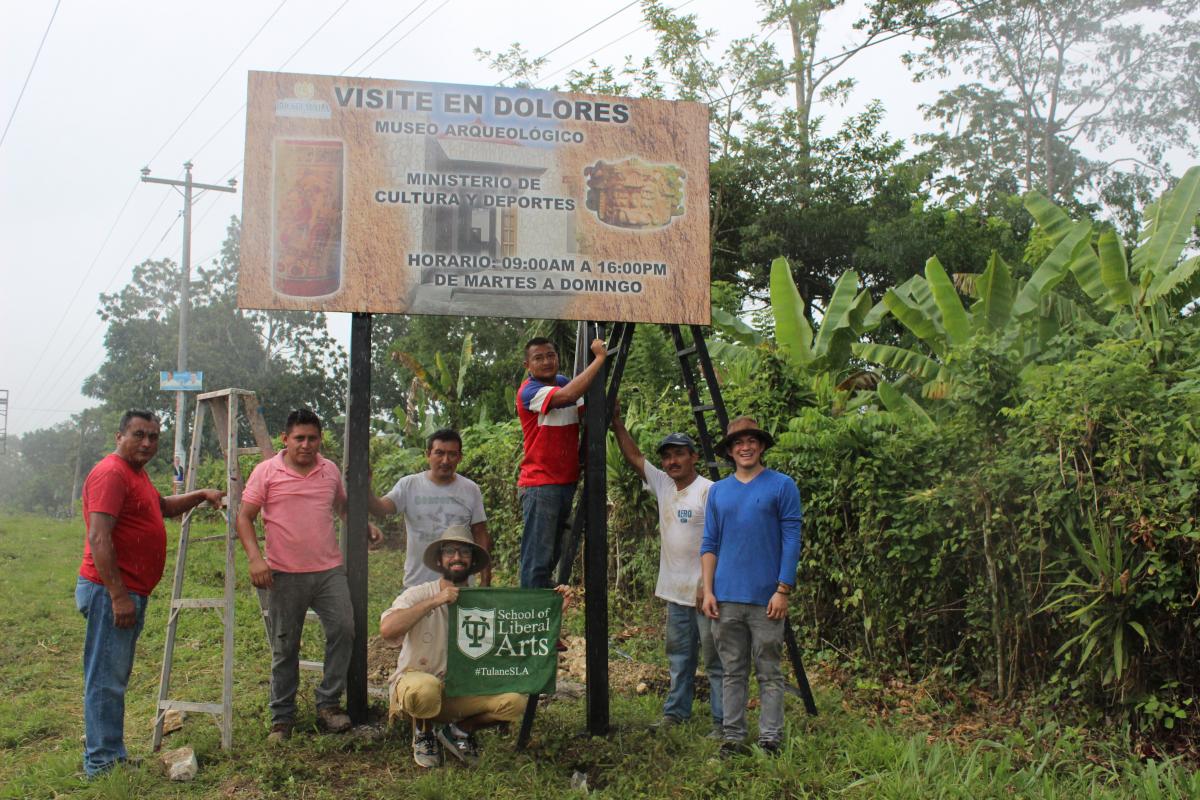 One of two new billboards advertising the museum installed on the CA-13 highway in Petén, Guatemala with the support of local Doloreños (people from Dolores).

For more information on Maya Scripta, email mayascripta@uvg.edu.gt or rmoralesforte@tulane.edu.