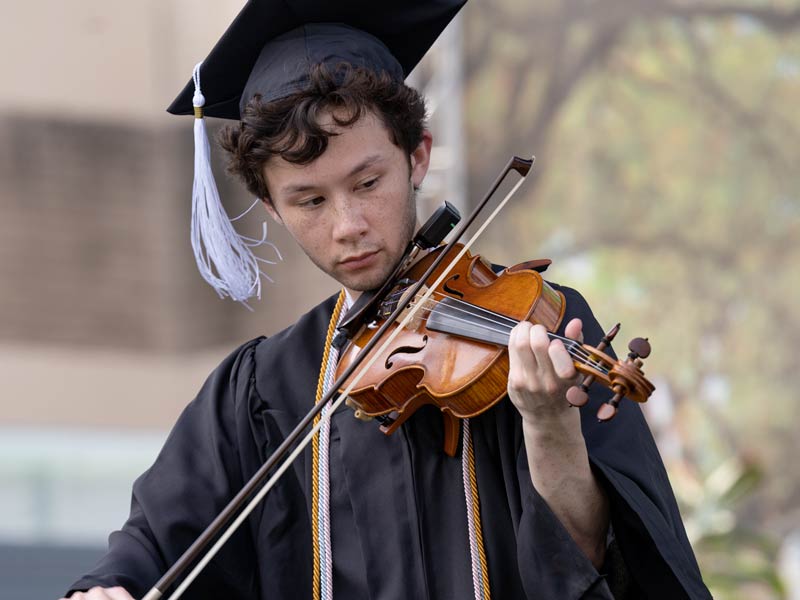 The 2022 School of Liberal Arts diploma ceremony continued in its tradition of a student musical performance with an original work by a talented double major candidate.  Michael Sze took the stage to play a variation of an excerpt from an original composition before receiving a double Bachelor of Fine Arts in Jazz Studies and History.

Growing up in Menlo Park, California, Michael started playing violin at the age of nine, but broke the classical mold when he joined his middle school jazz band and fell in love with the music. In his time as an undergraduate, Sze took interest in the Ancient and Classical eras, particularly the Assyrian Empire, and studied primarily with Dr. Kenneth Harl in the History Department. On the Jazz Studies side, Michael learned extensively under Music Department professors Jesse McBride, Dr. Courtney Bryan, and Hannah Yim. In Dr. Bryan’s words, “As a violinist, improvisor, composer, and collaborator, he has performed in a wide range of ensembles on campus as well as with his own ensembles in venues across New Orleans. He consistently approaches his creative and academic pursuits with a sense of adventure, with dedication, and always with excellence. We are excited for this next stage of his musical journey.”

Sze is currently a member of several bands throughout New Orleans—most notably the Tulane Black American Music Collective which will take him to the Ascona Jazz Festival in Switzerland this summer, and a progressive rock and jazz fusion band called Skeptic Moon (which he co-leads), whose debut album will be released next month.

“Michael is one of the brightest young artists on his instrument. He has an opportunity be as great as he chooses!” —Jesse McBride

Michael’s most significant musical progression has been in the experimentation with different sounds and textures of the violin, which has influenced both the composing and performing of his musical style. The piece he performed onstage is from an original composition entitled "Lamassu," an Assyrian protective statue/spirit, pronounced "laMAsoo" and was an amazing illustration of his decade-long passion for this genre of music in its birthplace. When asked about the experience of performing for his graduating class, Michael noted that it was amazing to share some of his original work with his peers. “I almost never perform solo, so I spent awhile coming up with this version of the song, and it as very rewarding for me, personally, to see that the piece was well-received.”