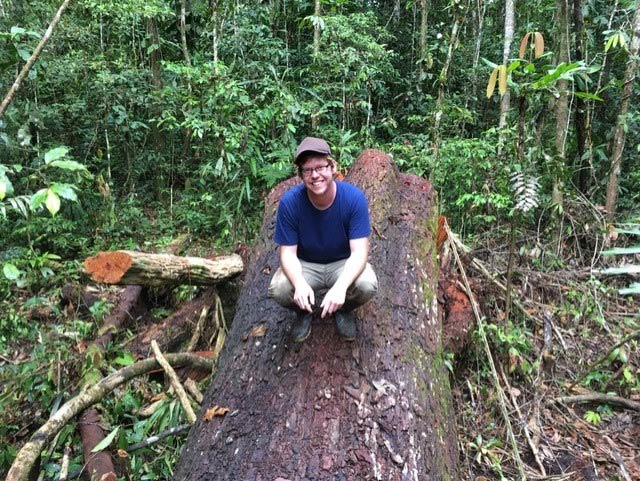 Ph.D. candidate in anthropology Travis Fink sitting on a tree trunk during a communal work party (called a minga in Kichwa) one hour by canoe downriver from Kapirna during a previous visit to Ecuador. The tree was felled to build a large canoe for the community. Photograph by Jimmy Beveridge.

Travis Fink, a doctoral candidate in the Department of Anthropology, has been traveling to Ecuador to study indigenous populations and the environment for the past seven years. In January, with the support of a prestigious Fulbright-Hays award, Fink will return to the Ecuadorian Amazon for the eighth time to research indigenous perceptions of history.

Fink will conduct participant observation while living within an indigenous community of the Shiwiar people for a full year. The Shiwiar have been a historically understudied group, mostly because they were not recognized as a distinct group until the 1980s. As Fink describes, “it seems the Shiwiar people came from a faction of Achuar families that migrated and absorbed Kichwa speaking (Amazonian Quechua) Zaparoan groups. These are all indigenous peoples of the Ecuadorian Amazon, so my research also delves into mobility, migration, economics, the environment, and tourism.”

Throughout the year in Ecuador, Fink will focus on everyday life of the Shiwiar community, listening to what it means to be Shiwiar, and observing how they work with other nearby indigenous communities through interactions such as trade, political meetings, and intermarriage. Fink will travel to the provincial capital for political meetings and to Quito for other political events, and will also conduct many community oral history workshops in an effort to make his research as collaborative as possible. “These workshops will be an opportunity to preserve oral histories of the area for future generations and perhaps the general public, depending upon how they are shared,” Fink explained. He understands that his role is more of a filter between what the indigenous community members share with him and what gets represented, so he plans to keep the interviews as much in their voices as possible. “I also have to respect if the community is divided on sharing oral histories.”

Since first visiting the area, community members have encouraged Fink to help them learn English so they can cultivate eco and cultural tourism in the area as an alternative to relying on income from the oil industry. “My immediate goal is to answer my research questions by collecting oral histories and learning the history of the Shiwiar people from their perspective and the perspective of their indigenous neighbors,” explains Fink. “Long term, I’m hoping we can get more projects going in Shiwiar communities, have more researchers come and work with them, and maybe find some sustainable alternatives to bring income into their communities while ensuring they have the agency to determine what happens with their territory.”

Professor of anthropology William Balée explains, “The origins and history of Shiwiar corporate identity—and how they, the Shiwiar people themselves understand that, and how they know who they are and where they came from—are complex and interesting topics. Travis’ Fulbright-Hays award will help him bring those topics to light, and to assess and refine in his dissertation certain concepts we frequently use in Amazonianist anthropology, like native society, indigenous group, and tribal village.”

Balée serves as Fink’s dissertation advisor and has worked with Fink since he began graduate school at Tulane in 2015. After Fink completed his undergraduate studies at the University of Pittsburgh, Fink chose to come to Tulane to work with Professor Balée “because of his work with historical ecology, his research on the history of Amazonia, and his work on human-environmental interactions. Balée’s work on historical ecology has greatly influenced the theoretical perspective that I take on this research project,” said Fink.

The Fulbright-Hays Program is a Fulbright Program funded by a Congressional appropriation to the United States Department of Education. The program awards grants to individual U.S. K-14 pre-teachers, teachers and administrators, pre-doctoral students, and postdoctoral faculty, as well as to U.S. institutions and organizations. The awards support research and training efforts overseas, which focus on non-Western foreign languages and area studies.