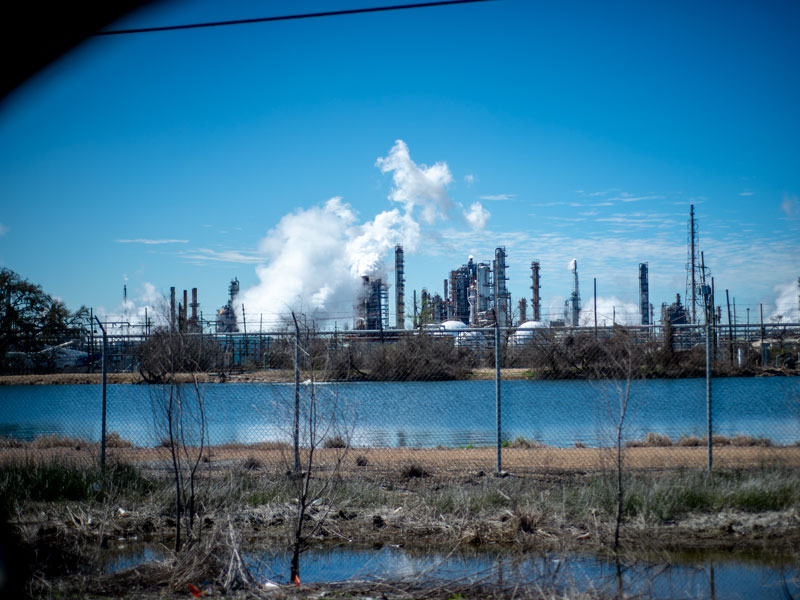 The Shell Norco Manufacturing Complex, located in Louisiana's St. Charles Parish along the Mississippi River, is one of the largest petrochemical facilities in the country. Photo by Paula Burch-Celentano. 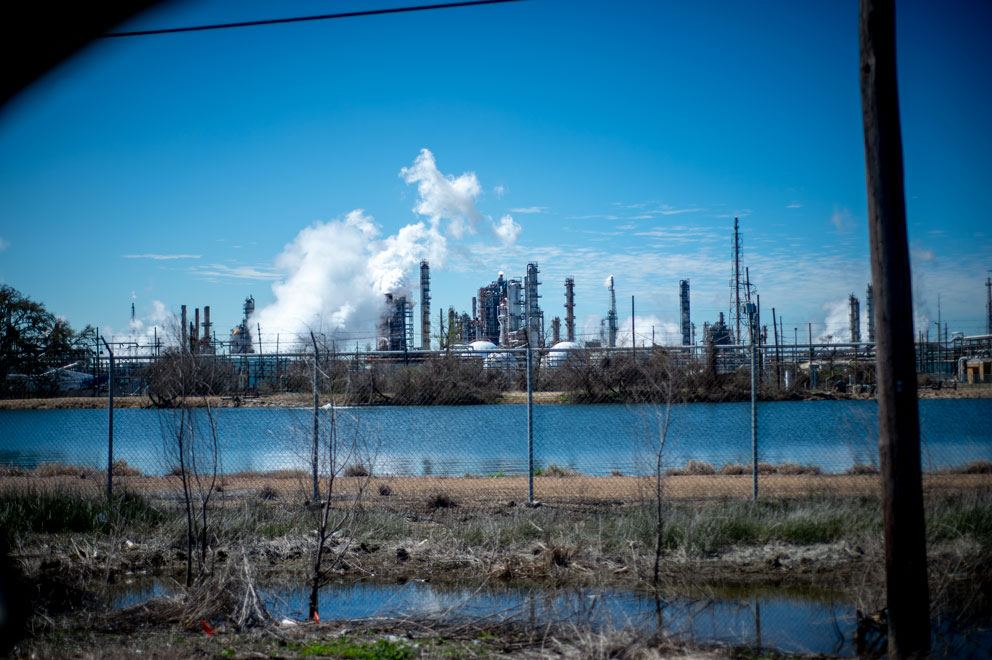 The Shell Norco Manufacturing Complex, located in Louisiana's St. Charles Parish along the Mississippi River, is one of the largest petrochemical facilities in the country. Photo by Paula Burch-Celentano.

As the Mississippi River moves through Baton Rouge and snakes toward New Orleans, it passes a strip of land unlike any it encountered previously. This 85-mile stretch along the river is colloquially known as “Cancer Alley” or the “Petrochemical Corridor,” and encompasses about 135 petrochemical plants and many more industrial facilities. These plants dominate the landscape, eating up acres of land, pulling in hundreds of gallons of water from the Mississippi, and discharging industrial waste back into the river and atmosphere. From the expansiveness of these sites, it appears as though they have always stood guard over the river waters. Yet the history of these spaces, often submerged in oil and smog, reveals that this industrial landscape once held quite a different—though no less pernicious—character. Beneath the facilities lies a long history of colonization, expropriation, and slavery. Where plant operators, managers, and technicians now work, enslaved Africans once toiled, forced to work the land and cultivate its crops.

Environmental Archaeology examines the relationship between human behavior and environmental change throughout history. This course looks at the ways in which humans have responded to their environmental circumstances and the ways in which human activities have influenced environmental conditions. Through a combination of lectures, in-class discussion, and self-led research papers, students learn how archaeologists employ methods and theories from a variety of disciplines to explore topics concerning past human/environment interactions. These themes include causes of global climate change, the origins of agriculture and animal domestication, food taboos and colonialism, societal collapse and resilience during environmental change, and Holocene changes in human health, including the origins of modern disease epidemics.

St. Charles Parish hosts one such site. Several of the plantations that once dominated its social and economic spheres became the infamous Shell Norco Manufacturing Complex, one of the largest petrochemical facilities in the country. Yet before industry dominated St. Charles’ landscape, Indigenous populations lived and worked on the land, as local historian Henry Yoes describes in Louisiana’s German Coast. The Native American peoples the Taensas inhabited present-day St. Charles Parish, but the arrival of 17th century French colonists set upon developing an agricultural empire forced the relocation and decimation of Native peoples in the area. In Indigenous peoples’ stead, French colonists erected plantations to raise sugarcane, indigo, and rice, forcing enslaved Africans to perform dangerous and grueling labor. Under the brutal regime of southern slaveholding, African and African-descended peoples worked the parish soils, raising fortunes for planter elites.

This agricultural focus began to change when, in 1914, the New Orleans Item reported that Mexican Petroleum had purchased land on the Destrehan plantation to build a large oil refinery. A short two years later, the newspaper proclaimed that the New Orleans Refining Company bought 366 acres of sugarcane fields from the neighboring Good Hope plantation. With the introduction of the first major petroleum industries into the parish, the character of the landscape began to shift irrevocably.

With the introduction of the first major petroleum industries into the parish, the character of the landscape began to shift irrevocably.

While this transition dramatically altered the landscape’s use and aesthetic, the exploitation of its land and peoples remained consistent. Extracting from the environment, whether in the form of soil nutrients or acreage, defined the planters’ and corporations’ approach to the land. This lens of exploitation similarly carried over to their treatment of the local population, especially African-descended peoples. St. Charles’ Black population suffered the degradations of slavery and coerced labor while agriculture dominated. To this day, their local descendants still bear the brunt of the petrochemical industry’s polluting effects of cancer and chronic illnesses, dirty tap water, and toxin-laden soils with little to no restitution.

The titanic piping and exhaling stacks that preside over St. Charles and the river parishes of the Petrochemical Corridor are therein the latest transformation of a space long characterized by exploitation. The geography of industry overlays that of colonization and slavery, but it does not erase the latter’s lasting impacts. It only lengthens the story. Scholars of these spaces must remain dedicated to both telling this story in its entirety while aiding ongoing efforts to construct a new one within it, one based in the reparation and liberation long owed to these communities.