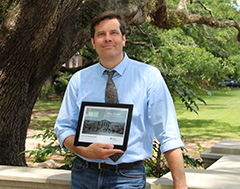 The April Brayfield Teaching award goes to Marc Zender of the Department of Anthropology. Marc is a linguistic anthropologist who is fluid in five languages in addition to English. After serving as an instructor at the University of Calgary and Harvard University, Marc came to Tulane first as a visiting assistant professor in 2011 and then became an assistant professor in 2014. For someone whose stay at Tulane has been relatively brief, Marc’s impact on his students has been enormous. Since his arrival at Tulane he has taught fifteen different courses, ranging from the 3000 to 7000 level, as well as independent studies – the only anthropologist, his chair notes, to accrue such an amazing record. Not only is the variety outstanding, but the courses are central to anthropology and linguistics, as well as the Stone Center. His chair, Trent Holliday, has great praise for Marc’s organization, use of powerpoint presentations, speaking style, and ability to engender discussion. Holliday writes that, “Dr. Zender is an excellent scholar who has the gift of being able to present his material to non-experts in bite size pieces without dumbing down the content.“ He notes that the students describe Marc as “fantastic,” “awesome,” “amazing,” “brilliant” and “fun.” Many call him their favorite professor. Holliday concludes, “He is one of our hardest-working faculty members and easily the most talented Anthropology professor in the classroom.” In a department of great teaching, Holliday gives Marc outstanding praise, reaffirming that he is certainly worthy of the April Brayfield Teaching award. 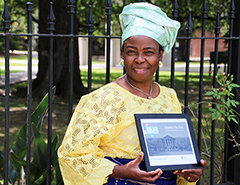 The service award is presented to Ọlanikẹ Ọla Orieof the Department of Anthropology who has performed outstanding work on the departmental, school, and professional levels. On the department level, she has played an active role on the Graduate Student Teaching Oversight Committee, ensuring that graduate students will be mentored and aided as they navigate the demands of new teaching. For the School, she is the Administrator of the Fulbright African Language Teaching program and co-director of Tulane’s Less-Commonly-Taught Language Program. In this capacity, Ọlanikẹ brought scholars from Africa to teach Swahili and Yoruba to Tulane students as well as two individuals to teach Turkish. For the last four years, she has served as director of the Tulane Interdisciplinary Linguistics Program, overseeing both undergraduate and graduate students, creating a working papers series, and developing Tulane’s MA program in Computational Linguistics. She has organized conferences at Tulane. In both 2014 and 2015, the university was one of 20 host campuses for young African leaders as part of Obama’s Young African Leaders Initiative. She has served on numerous important university committees, including the executive committee of Africana Studies, the University Senate Committee on Equal Opportunity & Institutional Equity, and as faculty advisor to the Tulane American Sign Language Club and the Tulane Chapter of the National Studies of Speech Language and Hearing Association. 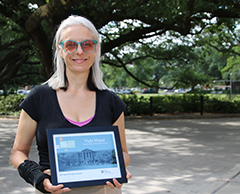 The research award this year is given to Vicki Mayer of the Department of Communication. In the last thirteen years, her accomplishments have been outstanding. She has published three single-authored books, one co-authored book, three co-edited major volumes, as well as seventeen peer-reviewed articles and sixteen book chapters. She has served as editor of Television and New Media as well as launched several digital humanities initiatives, including most recently ViaNola Vie, a magazine of life and culture in New Orleans. She has a global perspective ranging from assembly line workers in the Amazon film industry to production workers in New Orleans. Vicki's work has been cited in the Wall Street Journal and has shaped scores of academic discussions. A reviewer of her recent book, Almost Hollywood, Nearly New Orleans: The Lure of the Local Film Economy, wrote, "A visionary in the study of cultural labor, economy, and geography, Mayer is that rare writer who combines exquisite storytelling with rigorous scholarship. This is an essential contribution to film and media studies, and an urgent history lesson for policy makers.” 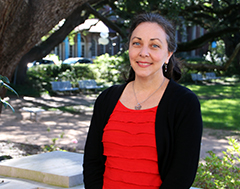 The staff award is presented to Laura Richens, curator of the faculty and student gallery of the Newcomb Art Department since 2002. In nominating her, department chair Elizabeth Boone writes that each year Laura performs magic. On a budget of less than $10,000 annually, she manages and coordinates 10-12 shows a year, ranging from undergraduate and MFA degree shows to exhibitions of regional and local contemporary artists. In 2014, she arranged for the Carroll Gallery to be of Prospect 3 biennial and is now arranging for the gallery's participation in Prospect 4. As Boone notes, she is a one-woman force; almost alone she handles all aspects of the shows, works with studio faculty, provides oversight to students as they plan their exhibitions, and mentors them as they submit their work to juried shows. Laura also runs the Newcomb Holiday Sale. In her nomination, Elizabeth Boone writes, Laura “is frankly a joy to work with, and is a model of loyalty, service, and excellence. She presents the very best image of the department and of Tulane, not only to parents and students, but also to the wider community of New Orleans.” 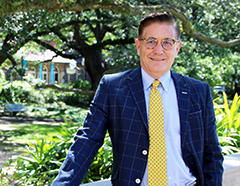 The senior Mellon professorship, a three-year position, is awarded to Randy Sparks of the History Department. In his nomination, his chair Kris Lane describes him as “a world-renowned historian of the U.S. South and of the African Diaspora. His work has been widely praised for its innovative linking of African and colonial-to-antebellum worlds.” Randy has published five books, two of which have been translated into French and one into German, and has an Arabic edition forthcoming. He has a new book under contract with Harvard University Press. He has been co-editor of four books, and written numerous articles and book chapters. Randy has been invited to give academic papers both throughout this country and in London, Paris, Glasgow, Bellagio, and Amsterdam. He has won numerous honors and awards, as well as major grants to support his research. His chair concludes, Randy “has done what statistical historians of the slave trade routinely fail to do: to keep a human face on this greatest of U.S. and Atlantic world tragedies.”