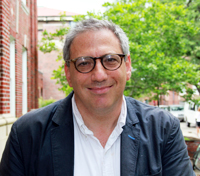 This year's research award goes to Brian Horowitz, Sizeler Family Chair and Professor of Jewish Studies. Brian came to Tulane in 2003 as an associate professor, and became a full professor in 2008. In the ten years he has been here, he has published three books and written nearly 30 journal articles and 13 book chapters. In the last two years alone, he has completed two books of essays and has just completed editing the manuscript of Vladimir Jabotinsky, an influential Revisionist Zionist leader. Brian has also become a recognized presence at international conferences, as well as the organizer of numerous conferences on campus. His most recent international conference held at Tulane, “Utopia and Dystopia in American, European, and Israeli Jewish History,” was supported by a Posen Foundation grant. In addition, he has won residential grants for his own research both nationally and in Germany. He has also worked tirelessly to establish Jewish Studies as a new department on campus. He has accomplished all this while performing admirably as the chair of Germanic and Slavic Studies and now the chair of Jewish Studies. 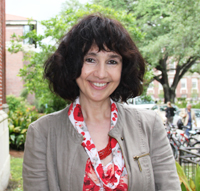 Following in the footsteps of April Brayfield is indeed a daunting task. Annette Sojic, Senior Professor of Practice in the Department of French & Italian, clearly meets this criterion. Every year, her department has nominated her for the award, and the members of the faculty have joined forces to sing her praises. Not only does she teach a variety of core courses that develop crucial skills of writing and critical analysis but she has revamped the course on translation and added a service learning component that takes students to the Louisiana State Museum to translate eighteenth and nineteenth centuries’ archival documents. She also reworked the course on the short story, making it writing intensive. A colleague visiting her class wrote, “Madame Sojic represents that extraordinary heritage of a training in literature, a storehouse of citations, a sort of living library.” Her students join the faculty in singing her praises. Wrote one, “Great class, great teacher. She truly cares about learning and is not just focused on grades. Will do anything she can to help you do well.” Words such as incredible, superlative, and kind fill her evaluations. And, certainly in the spirit of the April Brayfield award, when a fellow faculty member was taken ill, she immediately volunteered to teach her class and add it to her already high load. As her chair concluded in his recommendation, “Annette Sojic is a great humanist as well as an exceptional teacher and colleague. She inspires us in her daily work and holds the bar high in our department.” 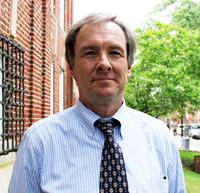 The School of Liberal Arts service award goes to Michael Kuczynski, Associate Professor of English, who, it seems, has been on every committee and important service position since coming to Tulane in 1988. He has served twice as chair of his department, as well as associate chair, director of undergraduate students, director of the writing program, and chair of numerous search committees. He has been an active member of the School of Liberal Arts governance. Although deeply engaged in the department, he has still volunteered (and due to the esteem his colleagues hold him), twice elected to such important committees as the promotion and tenure committee as well as the Dean of Arts & Sciences, review committee, and the committee on committee. Even while on sabbatical he served as the chair of the senate committee for art collections, and a member of the university senate. He has been a key person for the development of the Digital Humanities Certificate as well as for forging our ties to the Newberry Library and the Folger Shakespeare Institute. While this record is impressive, the service Michael performs is far more than this extensive list. What is truly extraordinary is the dedication, good sense, patience, and wisdom he applies to each of these roles. Engaged in his scholarship and an outstanding teacher, he truly exemplifies the saying that if you want something done – and in his case done extraordinarily well – have it done by a busy person. 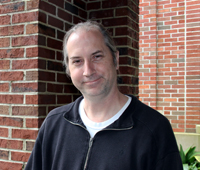 The School of Liberal Arts staff award this year goes to Michael Batt, Production Manager for the Department of Music. As those who nominated him noted, his job description hardly reflects the range of the activities he performs for the department or for the school. One nominator wrote that he was “like the Phantom of the Opera, as he virtually lives in Dixon.” Through his knowledge of both technology and music, Michael is able to keep an out-dated building and often-times antiquated equipment running as if they were actually modern. He knows little of time clocks or even days of the week. He can be found at events well beyond the work day or even on weekends. As another nominator wrote, “He works in a den of temperamental musicians, with huge, sometimes unreasonable visions. But his response always is, “Let’s see how we can make this happen.” Michael’s dedication and energy is vividly reflected in an incident that occurred this year. Well after hours, during the Trombone Shorty Academy auditions, a girl appeared without an instrument, but the desire to audition. Michael – who was still there of course although it was probably 7 in the evening, – then ran through the halls of Dixon looking for a clarinet for her, and even procured an unused reed. Despite the late time, he never thought the request ridiculous or impossible, and found just what she needed.