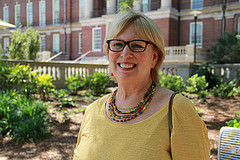 This year's research award goes to Emily Clark, a recently promoted full professor in the department of History. Emily is an exceedingly productive historian, having published two monographs, a translation of a French nun’s letters, an edited collection of articles, two single-authored and two coauthored journal articles, and nine book chapters. Her work has made an outstanding contribution to the discipline, shaping the direction of the field. Her first book, Masterless Mistresses, examined the lives and impact of the Ursulines in colonial and early national New Orleans and won three book prizes. She has published two articles in the flagship journal for early American history, The William and Mary Quarterly, and both these articles have been reprinted. One, “The Feminine face of Afro-Catholicism in New Orleans,” won the best article on Southern Women’s History for 2003. Emily’s second monograph, The Strange History of the American Quadroon, was published in 2013 and has received rave reviews that praise the wide range of French, Spanish and English sources. She is currently working on two projects: a book on American Creole and a study of Noel Carriere, a freed slave who owned slaves. As her chair writes, “Her innovative research; her sensitive historical skills; her facility for breathing life into ostensibly dry documents; her incredible mastery of diverse sources, of complex international historiographies, and of three languages; her enviable ability to weave together local and transatlantic history explain why she is one of the key scholars of Louisiana and the francaphone Atlantic world". 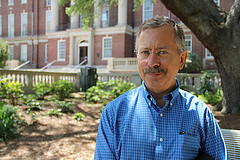 John Verano, a physical anthropologist specializing in human skeletal biology and forensic anthropology, came to Tulane in 1994. John is an outstanding teacher, adviser, and mentor as reflected by the fact he has won several Mortar Board Excellence in Teaching Awards and an R.C. Read Award for Excellence in teaching. He teaches courses ranging from introductory anthropology through graduate level seminars on physical anthropology and human evolution. Student evaluations reward his classes with near perfect – if not perfect – scores, which as the Department letter notes, place him as top of the Department. A typical student wrote, "Hands down, Dr. Verano is the best professor that I have had since I have been at Tulane. He really knows his information and presents it in a way that his students really understand and enjoy. I would tell anyone to take his class!" The only weakness in his course, wrote one student, is that he doesn't offer additional classes. Hardly surprisingly to anyone who knows him, the students praise his sense of humor and for making the classes fun. In addition to this outstanding teaching record, John shines as a mentor, overseeing numerous honors theses and many PhD students. 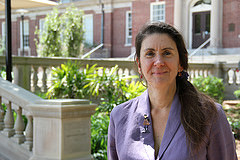 In over 25 years in the career, Nancy Maveety has compiled an impressive record of service to her department, university, profession, and community. In Political Science, she served two terms as undergraduate advisor, two terms as graduate advisor, one as department chair, and ran the Washington Semester program for six years. Nancy has long been involved in steering the Women’s Studies program, now the Gender and Sexuality Studies program (GESS), serving on numerous program, search, and review committees. She now serves as the director of GESS. Nancy has served on SLA and University committees too numerous to mention, including P&T (twice), SLA Executive, Curriculum, Graduate Studies, FTFR, Faculty Senate, SACS, and the Dean’s Review. Nancy’s service to the discipline is just as impressive. She is on the editorial board of two journals, an NSF advisory panel, and a Fulbright review committee. Nancy has served in a number of roles in the American Political Science Association and the Southern Political Science Association, most recently as the moderator and owner of LAWCOURT-L, a discussion list for the Law and Courts Section of the APSA. 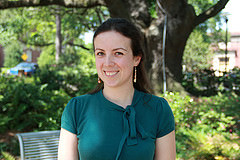 Our staff award winner this year if Jennifer O’Brien of the Political Science department. Jennifer received her BA in Political Science and French in 2009 while working as an administrative assistant. Impressed with her work, the department recruited her in the role of executive secretary. Early on, she mastered all the skills necessary to keep the department functioning including budget, events, student worker oversight, renovation of the facility, liaison with other departments and units, and all the new computer systems. She even assisted a faculty member in translating materials to and from French. In addition, she helped organize and run “Political Science Week.” According to her chair, Jennifer’s great talents were most apparent given the personal challenges the department has recently faced. Not only has she trained several administrative assistants, but, given the loss of Tom Langston, provided the expertise and fortitude to keep the department functioning. 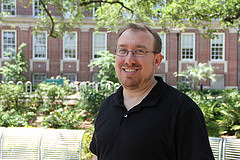 The new young Mellon Professor is Brian Demare of the Department of History who is a historian of modern China. His book, Mao's Cultural Army: Drama Troupes in China's Rural Revolution, will be published shortly by Cambridge University Press. He has also published three peered reviewed articles and given numerous professional papers at conferences. He has already begun working on his second book, "Troubadours of Revolution: Opera and Politics in the People's Republic of China." Even before receiving tenure he is well on his way to developing an international reputation. He has served as a visiting professor at the University of Erlangen Nuremberg in Germany and on the advisory board for Brill Press for their Contemporary Chinese History Series. His students sing his praises, and often declared that he is "the best professor I have ever had."