The SLA Research award this year goes to Kris Lane. Lane, a full professor in the History Department, is the France Vinto Scholes chair in Colonia Latin America, specializing in the Andean regions of Ecuador and Colombia, in the period 1540-1820. He has published 3 books, 2 edited works, 4 co-authored textbooks, 11 journal articles, 14 book chapters and 48 book reviews. Since 2010, he has been the general editor of the Colonial Latin American Review, and on the editorial board of the Hispanic American Review and Ethnohistory as well as a co-editor on a book series for the University of New Mexico Press. He is currently working on three different new monographs: “Gold, Slavery and the Environment;” “Colombia under the Habsburgs;” and, “Colombia Slavery.” A popular lecturer, he has given over 80 invited talks and lectures. He has received prestigious fellowships, including the National Endowment for the Humanities, the Mellon Foundation, a Fulbright and a Guggenheim. He has won numerous awards and recognitions for his work, including the 2001 Conference on Latin American History Tibesar Prize for the best articles published in The Americas and a 2003 Honorable Mention for the McGann Prize for the best book published in Latin American history. His works have been described as “accessible, authoritative, and articulate” and are noted for placing Latin American colonial history in a global context. 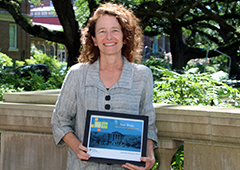 The April Brayfield Teaching award goes to Toni Weiss, a Senior Professor of Practice in the Department of Economics. Having taught in the department as a Professor of Practice since Katrina, Weiss has been instrumental in the growth of Economics majors, which, in recent years, has more than doubled and now tops 280. Given the demands of majors, those in SLAM, and the business school, she has agreed to teach very large economics classes. In fact, last fall she taught three classes with a total of nearly 600 students or just below 10% of the entire student body. But it is not only that she teaches to large groups, she does it outstandingly well. As the associate director of CELT, she has spent a great deal of time thinking about ideal teaching, and how to engage both a small group of students as well as a mass audience. Students report “loving economics,” and deciding to major in the field. Words like “awesome," “phenomenal,” and “amazing” fill her student evaluations. Beginning next year, Weiss will be the Lawrence M.v.D. Schloss Professorship of Practice in Economics responsible for teaching a general financial literacy course that undoubtedly will be in great demand. 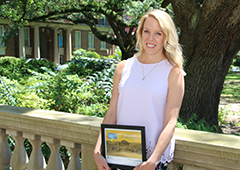 The SLA Service award goes to Casey Love, a Senior Professor of Practice in the Department of Political Science and co-director of the Altman Program in International Studies and Business. Love is instrumental to much of the exciting work being done in the department, as well as spearheading SLA’s role in the Altman program. For the department, she has led the commitment to service learning, and received a planning grant from the Center for Public Service (CPS) in 2008 to support the department’s service learning contributions. Her work was recognized in 2009 with CPS’s Barbara E. Moely Service Award. While Love teaches a variety of service learning courses, including classes in Costa Rica and Vietnam, she has also served as a mentor to seven Political Science faculty members as they created their own courses. In addition, she runs the internship program, through which she helps students find internships as well as approves placements, assists with registration, and reviews their final projects. She also ran two competitions for students for Washington-based internships and for internships with the Center for Strategic and International Studies, which this year will host 7 of our students. Since 2013, Love has organized Political Science Career Day, which brings in young alumni and featured national and international job possibilities. The last career day was attended by over 100 students. Love has served on numerous honors and theses committees and was coordinator of the department’s capstone experience. In addition to all this, Love coordinates the Altman Program to rave reviews from the students. 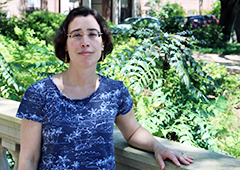 The recipient of the SLA staff award is Barb Ryan of the English department. Even in a normal year, Ryan is an outstanding executive secretary. She always does an amazing job on department budgets, faculty appointments, undergraduate needs, the Creative Writing Fund and associated events. This year, however, she was also responsible for the myriad activities associated with the Shakespeare celebration and the jazz funeral on campus, in Washington DC, and even in Stratford-upon-Avon. This meant that she handled issues both big and small, including airline tickets, hotel reservations, visa regulations, and the arrangements for a wonderful group of New Orleans musicians. Perhaps most importantly, Ryan is the go-to person of the English department, assisting Chair Mike Kuczynski with a multitude of tasks and handling them effortlessly. 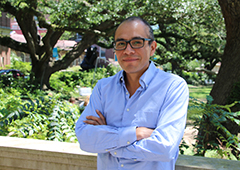 The Young Mellon this year goes to Yuri Herrera-Gutiérrez of the Department of Spanish & Portuguese. As his chair writes “Yuri is one of the most admired fiction writers in the Spanish speaking world [and] is quickly becoming one of its most renowned public commentators and intellectuals.” Although still an assistant professor, Herrera-Gutiérrez has published three award winning and reprinted novels, as well as numerous short stories that have appeared in journals and edited collections. In addition, as a scholar of Hispanic literature, he has published two peer-reviewed articles and has a monograph slated to appear in 2016. A truly international author, while he writes largely in Spanish, several of his pieces are in English, and almost all of his publications have been translated for English-speaking readers, as well as into French.As a teacher, he wins rave reviews from his students, and has revived courses on Mexican Cultural Studies as well as creative writing in Spanish. He even teaches a graduate course on Mexican Science Fiction.