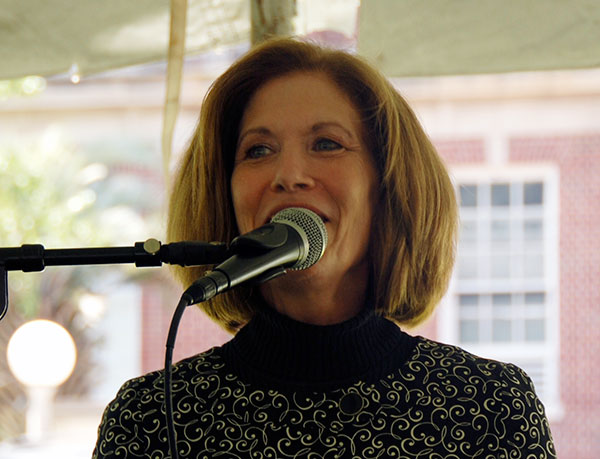 School of Liberal Arts Dean, Carole Haber, speaking to faculty and staff on April 27 at the SLA end-of-year picnic. (Photo by Simon Dorfman)

Even before I arrived at Tulane, I was struck by the dedication of the faculty. Inspiring teachers, world-class researchers, and tireless workers for good of the University, they brought an energy to the campus that was truly contagious. Although, since my arrival, no one has asked for special acknowledgement for such endeavors, as Dean of SLA, I am delighted that we were able to shine the light of recognition on some of these outstanding individuals. Creating a new tradition at SLA, at the end of year picnic, we presented what will become annual awards for outstanding research, teaching, and service. These prizes took special note of accomplishments that had occurred since the founding of SLA in 2006. The names of the winners will soon placed on a plaque of honor to be hung in Newcomb Hall. In addition, with the support of the Mellon Foundation, and in recognition of their great accomplishments, we announced the selection of one senior and two junior Mellon Professorships in the Humanities. 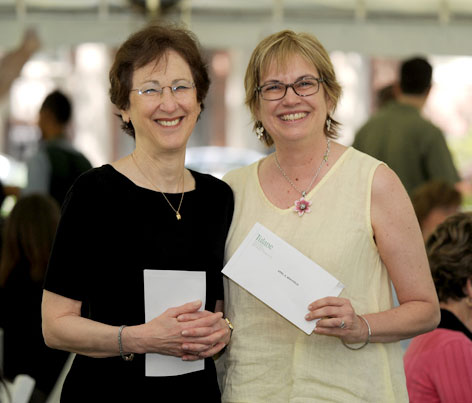 In a school known for outstanding teaching, the SLA teaching award was presented to April Brayfield of the Department of Sociology. Nominated by her colleagues, Prof. Brayfield has been long known as one of our truly amazing teachers. Her work has been recognized with numerous awards, as undergraduates, graduate students and faculty have all heralded her skills as a master teacher. In the past few years, she has creatively used technology in the classroom through innovative web projects. She has organized workshops on curriculum development, technology, and student writing seminars. Sought out by the students at ever level, she has chaired ten PhD committees, as well as many master's and honor's theses. And, in her new role as coordinator of Sociology's SACS review, she has brought her understanding of outstanding teaching into the assessment process. It was my honor to present the first SLA teaching award to April Brayfield.

Ronna Burger, Chair and Professor Philosophy, won the outstanding research award. Nominated by several members of her department, she has established an international reputation as a scholar. Already the author of two books, three edited books, and a number of articles, in 2008 she published Aristotle's Dialogue with Socrates and followed that in 2010 by a o-edited work, The Archaeology of the Soul: Platonic Readings of Ancient Poetry and Philosophy with Michael Davis. Aristotle's Dialogue with Socrates was the recipient of the 2008 Prose Award and is now being translated into Chinese. The reviews from the book praised it as "brilliant," "remarkable," and "the best book" in the field. One reviewer wrote, "It is impossible to do justice to the subtlety and density of Burger's work…" While this award, too, undoubtedly did not do justice to her work, it allowed us to recognize her outstanding scholarly achievements. 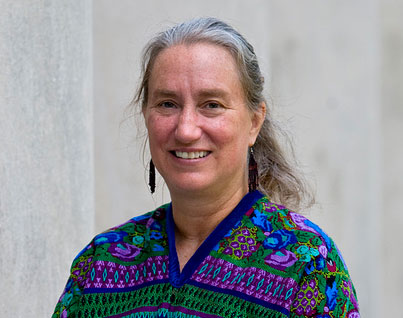 Judith Maxwell, Professor of Anthropology, was presented the award in absentia for outstanding service award. Nominated by her chair, John Verano, Judie has a long history of extraordinary service to her department, the school and the university. Most recently, she was instrumental in the creation of a new interdisciplinary PhD program in linguistics. Since the founding of SLA, it seems she has held every position possible – from Chair of the Anthropology Department to the Chair of SLA and Newcomb-Tulane's curriculum committee. She has participated in the Newcomb College Institute as well as the Latin-American Studies program. And, what is perhaps even more amazing, she has done this all with a smile on face and seemingly limitless energy. As readers of the SLA newsletter know, Judie couldn't be here because of her work in Guatemala, but I know that the entire faculty joined me in congratulating on her this well-deserved honor. 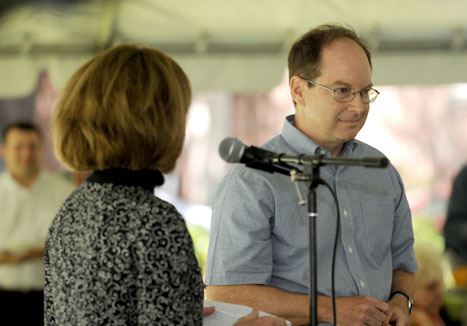 The Andrew W. Mellon Professorship in the Humanities was presented to Dennis Kehoe of the Department of Classics. (Photo by Paula Burch-Celentano)

The Andrew W. Mellon Professorship in the Humanities was presented to Dennis Kehoe of the Department of Classics. Nominated by his Department and well as a number of individuals throughout SLA, Dennis is the rare individual who combines outstanding scholarship, extraordinary teaching, and a dedication to the service of the University. As a leading historian of the Roman Empire, he has published four books and over three dozen articles. He is regularly invited to speak at international conferences about his work on the relations between Roman legal institutions and commerce across the Roman Empire. Bringing his enthusiasm for his scholarship into the classroom, he inspires his students to delve into the past. He has been a leader in service learning and in developing the Department's first capstone course. At the same time, he has performed great service to his Department, the School and the University. He has been Department Chair, Acting Director of Jewish Studies, a member of the SLA Executive Committee, the Promotion and Tenure Committee, the Newcomb Scholars Committee, Chair of the SLA Diversity Committee, Chair of the QEP Topic Selection Task Force and Chair of the University Committee on FTFR. As the holder of the Mellon Professorship in Humanities for the next three years, he is a wonderful representative of all that is best in SLA.

Two Young Mellon Professorships in the Humanities were also announced. Given to individuals who have recently passed their third year review, they will hold this title until they pass from the ranks of assistant professor into tenured associate professor. 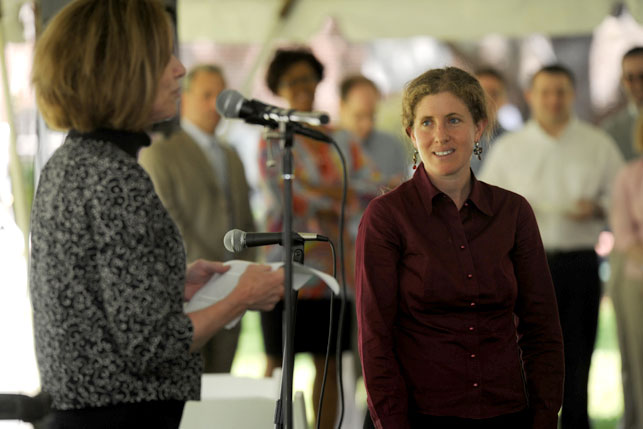 The first Young Mellon Professorship was given to Jana Lipman of the History Department. Although Jana only completed her PhD as recently as 2006 from Yale and came to Tulane in 2008, she has already published an award winning book, Guantanamo: A Working-Class History between Empire and Revolution. The book was named one of two winners of the 2009 Taft Labor History Prize. The committee awarding the prize declared that "Lipman demonstrates the importance of a transnational perspective and opens a window to a virtually unknown chapter of United States labor history." But, as her chair recently wrote to me, her accomplishments do not end with her scholarship. She is also an outstanding teacher and devoted departmental citizen. With young faculty members such as Jana, the future of SLA and the University is certainly bright. 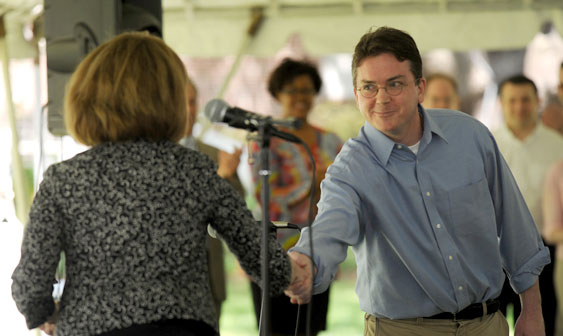 Accepting the second Young Professorship in the Humanities Award was John Charles of the Department of Spanish and Portuguese. (Photo by Paula Burch-Celentano)

The second Young Professorship in the Humanities was awarded to John Charles of the Department of Spanish and Portuguese. John came to us in 2003 as a visiting assistant professor after also obtaining his PhD at Yale. In 2005, he became a tenure-track assistant professor. In the period since his arrival at Tulane, he has demonstrated his abilities as an outstanding scholar, teacher, and member of the academic community. His book, Allies at Odds: the Andean Church and its Indigenous Agents, 1583-1671, is now in press with the University of New Mexico Press. Based on his prize-winning dissertation, the work, according to the past chair of his department, is "path-break, nuanced and …."represents the best kind of Interdisciplinarity." Having already published in the top journals in the field, John promises to be one of the true leaders of the field. And while John clearly shines in his scholarly abilities, he has also shown himself to be a talented teacher having taught sixteen different courses and having led graduate students worships. Not only participating in departmental service, he has contributed a great deal to the Stone Center and the School of Liberal Arts.

With faculty members such as these, the School of Liberal Arts is obviously an amazing place. It gave me great pride to be able to recognize their accomplishments. If I have one regret, it is that we could not give awards to all the extraordinary faculty members who were nominated by their colleagues. But then again, there is always next year!