In her debut novel, The Talented Ribkins, New Orleans author Ladee Hubbard takes readers on an imaginative road trip through Florida, as her characters grapple with rebuilding family bonds, self acceptance and superpowers as extraordinary as they are impractical. The recent recipient of the Ernest J. Gaines Award for Literary Excellence, Hubbard also uncovered the hidden talents of Ribkins when she appeared as a guest on “Late Night With Seth Meyers.” 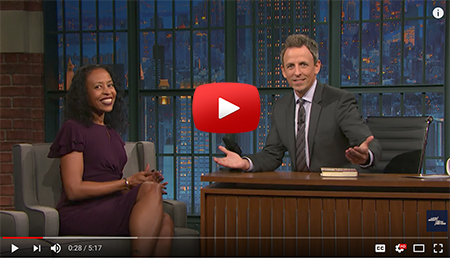 Ladee Hubbard, an adjunct lecturer in the Africana Studies program, discussed her debut novel, “The Talented Ribkins,” on “Late Night With Seth Meyers” this fall.

Hubbard, an adjunct lecturer in the Africana Studies program in the Tulane School of Liberal Arts, is currently teaching a course titled, Afro-Futurism: Science Fiction and Surrealism in African-American Literature & Culture.

“The book is ultimately about respecting that everyone has something to offer.”
— Ladee Hubbard, author of 'The Talented Ribkins'

In the class, her students are analyzing the works of several African-American speculative fiction writers, including a science-fiction short story written by sociologist W.E.B. Du Bois in 1920. Du Bois’ work inspired Hubbard to write her first novel.

“The idea for the novel came from thinking about both Du Bois’ essay ‘The Talented Tenth’ and responses to it that I’ve heard over the years,” said Hubbard. “Written in 1903, he was talking about the black leadership class in the South.”

Hubbard’s novel centers on the Ribkins family’s gifted members — Johnny Ribkins, a former civil rights activist, creates precise maps of places he’s never been; his half brother could scale walls; and his cousin spews fire. Now in his old age, Johnny, who turned his talents into a career in petty thievery, owes a large debt to a local gangster and must dig up money he has buried around Florida.

“His first stop is to the childhood home of his deceased half brother. When he gets there, he realizes that he has a niece that he didn’t know that he had, Eloise,” said Hubbard.

Hubbard began writing the novel in 2012 and originally published the first chapter as a short story before deciding to expand upon the world that she created.

“I knew that I wanted to extend the story of Eloise and Johnny into a novel,” she said. “A lot of characters spend time trying to figure out what to do with their talents and finding their place in the world. The book is ultimately about respecting that everyone has something to offer.”

Hubbard also notes that her main character, Johnny, illustrates the heroism of persistence throughout the book.

“If one route doesn’t work and doesn’t get him where he wants to go, he will keep trying to find another way,” she said.