The pace of technology is changing the media landscape and the way we consume news, according to co-authors of the new book Overload: Finding the Truth in Today’s Deluge of News. Bob Schieffer, former host of “Face the Nation” on CBS and Andrew Schwartz, Tulane alumnus and chief communications officer at the Center for Strategic and International Studies, visited the uptown campus Wednesday night to discuss their book and to share their perspectives on the state of modern journalism. 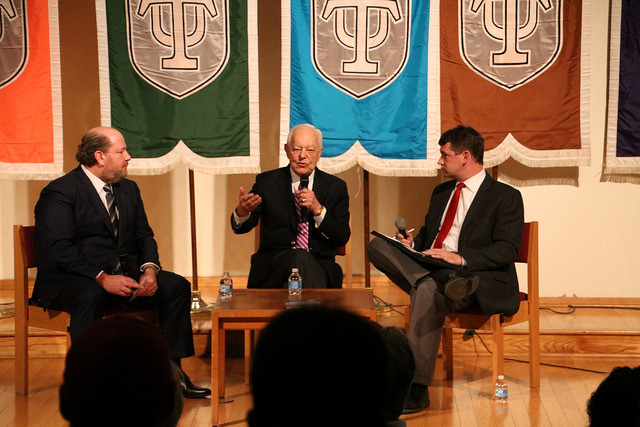 Andrew Schwartz, left, Tulane School of Liberal Arts alumnus and chief communications officer at the Center for Strategic and International Studies; Bob Schieffer, center, former host of “Face the Nation” on CBS; and Brian Brox, right, associate professor of political science at Tulane, listen to a question from the audience during a discussion about modern journalism Wednesday evening on the uptown campus.
Photo by Paula Burch-Celentano

According to Schieffer and Schwartz, there is a crisis faced by journalism today and it begins with local reporting.

“In 21 of the 50 states today, there is not a single newspaper in that state that has a Washington correspondent,” said Schieffer. “There are parts of this country where it’s not a question of slanted news or biased news, it’s a question of no news. People are getting no news except what they’re getting on social media. And a lot of the information on social media is not just untrue, it’s untrue on purpose.”

In 2017, approximately two-thirds of Americans are receiving some portion of their news from social media. Schieffer and Schwartz believe the spread of deliberate misinformation via social media is becoming an issue of national security.

“We’re now viewing this as not just an information problem, but a problem we’re calling ‘new generation warfare,’” said Schwartz.

Schieffer cited several examples of factually incorrect articles, now attributed to Russian bots, circulated during the election on social media sites such as Facebook and Twitter.

“Facebook, in testimony just before Congress last week, admitted that content curated by Russian intelligence sources has reached 126 million Americans,” said Schieffer. “That’s something we [as journalists] have to recognize.”

The challenge faced by journalists today, according to Schieffer and Schwartz, is creating a stronger digital media presence, writing unbiased news and keeping in mind one of the fundamental goals of journalism.

“The role of a journalist is not to fight the opposition party. Journalists have to understand the difference in what the politician does and what the reporter does. The politician delivers the message, and the reporter simply checks that message, finds out if it is true or false, and reports on its impact on the government,” said Schieffer. “That role is as crucial to our form of government as the right to vote. If we do that, it’s a noble thing.”

The event was moderated by associate professor of political science Brian Brox and sponsored by Newcomb-Tulane College and the School of Liberal Arts.