Jesmyn Ward, an associate professor of English at Tulane University, has been selected as one of the 2017 MacArthur Fellows, or recipient of the so-called “genius grant,” from the John D. and Catherine T. MacArthur Foundation. 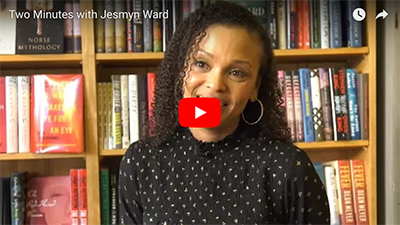 Jesmyn Ward, Associate Professor of English, speaks https://www.youtube.com/watch?v=jfgCDnARsjUabout her experience becoming an acclaimed author and her reaction to being named a 2017 MacArthur Fellow.
(Video by Carolyn Scofield)

Ward is a 2011 National Book Award winner for her novel Salvage the Bones and is considered one of the nation’s leading authors. She is the author of five critically acclaimed books, several of which have been reading selections by groups and universities.

The MacArthur Fellowship is a five-year grant to individuals who show exceptional creativity in their work and the prospect for still more in the future. The Fellowship is designed to provide recipients with the flexibility to pursue their own artistic, intellectual and professional activities in the absence of specific obligations or reporting requirements.

The unrestricted fellowships, also known as “genius” grants, are awarded to people who have shown “extraordinary originality and dedication in their creative pursuits and a marked capacity for self-direction.”

“When I received the call from the MacArthur Foundation, I was pretty shocked and speechless because it wasn’t the kind of call I was expecting,” said Ward. “Since the call, everything has felt so surreal to me and it has really taken a while to sink in. It’s a life-changing award. It means that people are looking at your body of work and seeing, and it's validation that I must be doing something right. The award and the great gift are both pretty incredible.”

Ward will receive a $625,000 stipend from the MacArthur Fellowship, which is paid in quarterly installments over five years. The award has been called "one of the most significant awards that is truly 'no strings attached’.

“Tulane is privileged to have such an accomplished and esteemed author on our faculty. Jesmyn’s books are modern masterpieces and her designation as a MacArthur Fellow is richly deserved. I know the entire university joins me in congratulating her,” said Tulane President Michael A. Fitts.

A native of DeLisle, Mississippi, Ward joined Tulane in 2014 and received the Strauss Living Award for literary excellence in 2016 from the Academy of Arts and Letters. Her work has already been compared to the great William Faulkner, by several national publications. Ward’s most recent book, Sing, Unburied, Sing, was released in September 2017.