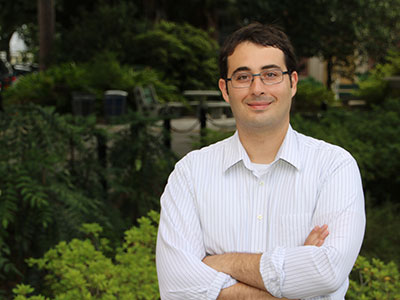 Patrick Rafail, associate professor in the Department of Sociology.

“Before we make new public policy, it’s important to know how things are currently operating,” explains Patrick Rafail, an associate professor in the School of Liberal Arts Department of Sociology. Much of Rafail’s research has centered on policing protest, the institution of policing, and social control. Earlier this summer, Rafail was awarded a grant from the Russell Sage Foundation to create a comprehensive database of fatal police shootings in the U.S. “I remember thinking to myself, I wonder what the research literature says about why these shootings happen and where they happen?” said Rafail. “I started looking, and there wasn’t much. There is no federal database that publishes fatal police shootings.”

Around one year ago, the FBI announced they would add fatal shootings to the Uniform Crime Report series that they publish each year, but there are gaps in the data and sometimes major departments don’t participate. So, Rafail is turning to the many crowd-sourced databases on police shootings, such as the one organized by The Washington Post. “Since none of these databases are exhaustive, I’m starting this inquiry by writing statistical code and computer programs to put these databases together into a unified master database that increases the comprehensiveness of the record by up to twenty percent.”

However, unifying the existing databases is just one part of the research project Rafail and three student research assistants will undergo. Rafail has also written computer software that will engage with Google’s Application Programming Interface (API), which will allow his team to pull search data in a way that can validate their project’s comprehensiveness. Another step in the larger project is to use more sociological concepts to understand what factors might lead to the shootings. “For example,” Rafail describes, “in the 2015 data that I analyzed, I found that fatal police shootings tend to happen at disproportionately high rates in segregated communities across the U.S. And that is especially true for African Americans and Latino and Latina people. It also seems to be influenced by socioeconomic inequality.” Lastly, Rafail and his team will look closely at newspaper articles on people that were shot, asking questions such as how are people that are shot and killed by the police described? What sort of adjectives or verbs are used? Rafail refers to this process as text mining and natural language processing, which will question how narratives are shaped and how this effects the way we understand fatal police shootings.

The database will target 2014 to 2018, and attempts to make public every person that was killed by gunfire from the police. “As a computational social scientist, my goal is to approach this project with an eye toward seeing what I could do to improve the quality of data available. Fatal police shootings are a chronic social problem in the U.S., and these shootings are disproportionate to any other industrial democracy. They have all sorts of negative consequences in terms of how communities, especially minority communities, might engage with the police. These are hypotheses I’ll be looking at systematically.”