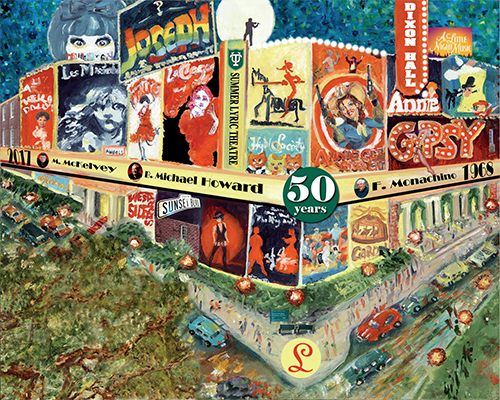 Summer Lyric Theatre at Tulane University is holding a 50th Anniversary Gala to help ensure that its future is as solid as its storied history.

The 50th Anniversary Gala will be held Saturday, June 3 at Tulane starting with a patron party in the Lavin-Bernick Center. The main event of the evening will be a concert starring some of Summer Lyric's most beloved alumni. This retrospective concert, will also feature fifty performers and members of the Louisiana Philharmonic, and begins at 8 p.m. in Dixon Hall. All proceeds will support The Summer Lyric Endowment.

“The Summer Lyric Endowment allows us to continue producing classic musical theatre in the fashion it was meant to be presented – full orchestra, beautiful sets and costumes, and quality performers with voices to compliment these great works. Our goal is always to produce the best quality musical theater in the Gulf South,” says Artistic Director Michael McKelvey.

The endowment drive began five years ago with a goal of raising $500,000, and organizers are nearly four-fifths of the way to the finish line.

“Our audiences and performers love Summer Lyric, and they want it to continue for future generations. That’s why they have come out in full support of the endowment. Michael and I have worked closely with our Steering Committee Co-Chair Barbara Workman to spread the word about the endowment far and wide. The response has been incredible,” says Operations Manager Charlie Farve Hayes.

The endowment assists in paying for various aspects of our main stage productions, most importantly the Summer Lyric Orchestra, which is comprised of members of the Louisiana Philharmonic. The theme of this season is “One Singular Sensation: A Tribute to the Ladies of the Great White Way." All three productions in this season's line up will feature some of the most iconic female characters of the musical theatre stage.

For gala tickets and other information about Summer Lyric Theatre, please visit https://liberalarts.tulane.edu/summer-lyric-theatre or e-mail lyric@tulane.edu.