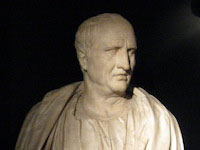 His current research is on the influence of ancient education on a variety of Latin and Greek authors, Cicero, in particular. He offers courses in Latin and Greek at all language levels, and, in English translation, courses in Roman history, mythology, and ancient drama.