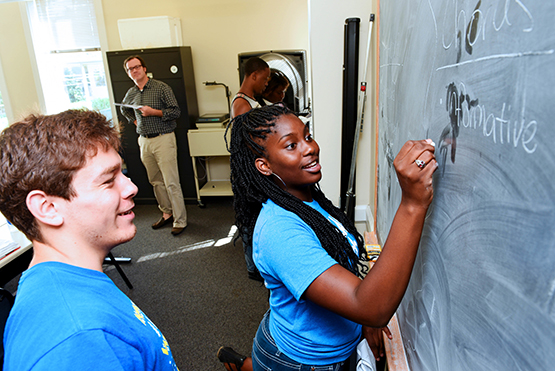 Community engagement is something Tulane does well. The Princeton Review recently ranked Tulane as the top university in the country for it. And Tulane's undergraduate experience is defined by the school's commitment to public service. But, until recently, opportunities to get experience in community-engaged teaching and research were limited for Tulane's graduate students.

Alumni Spotlights - In Their Words

When I decided to move to Bulgaria for a year of teaching English, I had quite a few assumptions and only a vague idea of what my role as a foreign teacher would actually be.

Two months after graduating from the School of Liberal Arts, I packed up my bags and drove north to Philadelphia to accept a job on the Hillary Clinton presidential campaign.

During my last semester, I made a decision to pursue something different and unexpected: I chose to apply my knowledge of German and spend a year in Hamburg, Germany.

The New Orleans Center for the Gulf South in Tulane University's School of Liberal Arts will hold two workshops this summer for K-12 teachers who want to explore the intersections of New Orleans music, culture, and civil rights into the classroom.

Returning to His Roots

Ryan Judd, a 2012 graduate of the School of Liberal Arts, has come full circle. During his four years at Tulane, Judd worked as a student assistant in the Language Learning Center in the School of Liberal Arts. Then he went out into the world. Now, the double major in English and Asian studies is returning to his roots, bringing his experience to Tulane as Manager of the Language Learning Center.

Denise Frazier is a scholar, educator, violinist, and Gulf South native—a resume that has primed her for her new role as Assistant Director of the New Orleans Center for the Gulf South. "I'm fascinated by this region," says Frazier "and I'm enthusiastic to work with other people who are excited to discuss it as well and put it in a larger and more global context."

Message from the Dean Linking language, culture, and society

All too often, we hear that the liberal arts are tangential to "real" studies that have an impact on today's pressing issues. As this month's newsletter demonstrates, for our faculty, staff, and students, such an assessment is far from the truth. In a globalized economy, the knowledge gained through the study of language and society is invaluable; the link between cultural questioning and understanding is profound.

News from the Field: Toby WikströmSearching for Clues in the Parisian Archives

Literary scholars are often compared to detectives. Much like Agatha Christie's Miss Marple or Stieg Larsson's Mikael Blomkvist try to decipher enigmatic clues to solve mysteries, researchers in literature grapple with ambiguous texts, examining their narrative structure and figurative language closely for clues that will help unveil their hidden meaning.

Philanthropy and Social Change Learning to Give

Tulane University students in "Philanthropy and Social Change" got a real-life lesson in philanthropy by giving away $50,000 to seven New Orleans non-profits.

After spending a year in the director's chair, a group of Tulane seniors brought their original short films to the big screen. Produced as part of the Digital Media Production program's advanced filmmaking capstone course, the films premiered at a special screening hosted by the historic Prytania Theatre in uptown New Orleans.

On October 27, 2016, Ed Morse, Professor Emeritus in the Department of Sociology, passed away in Cashiers, North Carolina, where he had been living since his retirement from Tulane in 2008.