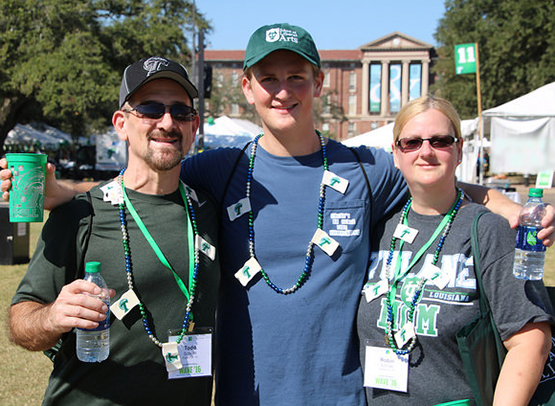 In fall of 2015, Abby Perkins took my Women in Politics class, where quite a bit of class time is focused on how gender influences modern political campaigns. Abby was particularly interested in how campaigns work and how candidates use gender to appeal to voters, which is an area of my research agenda. I recruited students from the class to work on a project, funded by the Newcomb College Institute, which evaluated the ways that the 2016 presidential candidates were using gender in their campaign communications.

One of the main reasons I decided to attend Tulane was because of Dr. Katharine Jack, Professor of Anthropology and Director of the Environmental Studies program. When I was applying to colleges I researched professors that I would be interested in working with at each of the institutions and I was able to meet Dr. Jack when I visited for Honors Weekend. She talked about her research with wild white-faced capuchin monkeys...

When I started at Tulane I had no intentions of graduating with a Liberal Arts degree. Moving to New Orleans as a freshman, I imagined my time at Tulane would go something like this: Move in, start architecture classes, explore some other fields that interested me, figure out what I wanted to do with my life, graduate with a Masters of Architecture and move back to D.C. to get a job. Little did I know, this would all change after my first semester.

Tulane students in Professor Emily Clark's history class, New Orleans Free People of Color, are uncovering the past. Clark has researched and written extensively about New Orleans' French-speaking, mixed race descendants of enslaved women and their white owners, referred to as free people of color. As late as 1840, they made up 20 percent of the city's population. By diving into 18th- and 19th-century archives under Clark's expert supervision, students have the unique opportunity to research free families of color who owned property in the French Quarter. At the end of the course, students will each produce an online module and share the stories they discover with the public.

Message from the Dean Providing perspective on today's most pressing issues

All too often, the academy, and especially the liberal arts, are seen as isolated behind the ivory tower's walls, with little relevance to contemporary issues. As this month's newsletter demonstrates, nothing could be further than the truth.

News from the Field: Patrick Rafail The Dynamics of the Tea Party Movement

The genesis of my research leave goes back to the afternoon of April 15th, 2009. I vividly recall watching more than 1,000 tax day Tea Party rallies take place across the United States. The days following the rallies saw the founding of thousands of Tea Party groups, and a movement was born.

D.C. Political Panel: J. Celeste Lay The Political Landscape: An election like no other

Though it is a quadrennial cliché to say that a presidential election is "like no other" or "the most important in our lifetime," in 2016 the words are genuinely true. On September 21, I had the pleasure of participating in a panel in Washington, D.C.

Campaign promises do matter. That's what a panel of political science professors told a group of students gathered to hear the experts analyze the 2016 U.S. presidential election.

The American Political Science Association, now over 100 years old, was founded at Tulane by a Tulane professor.