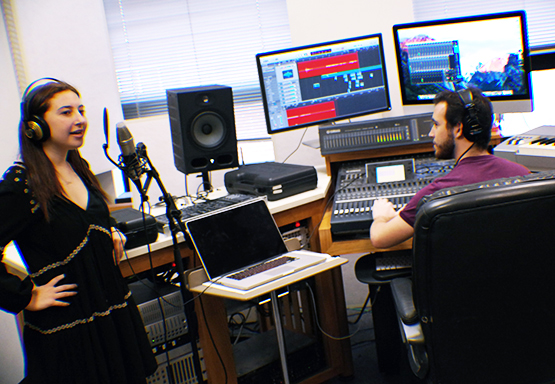 Like it or not, the personal computer has taken its place next to traditional acoustic instruments as a primary outlet for musical creativity. Students taking courses in the Music Science and Technology program of Tulane's Newcomb Department of Music constantly negotiate the relationship between music making and technology.

Four weeks into the semester, all of my students received new identities. Literally. The eleven Tulane undergraduates assembled in my 4000-level Jewish Studies seminar, Living, Together Apart?: Jews, Christians and Coexistence in the modern Polish lands, gathered in class on that dry Monday afternoon to learn when they were born, where they grew up, the religion their parents practiced and which first name would follow them throughout their lives. All of them shared the same birth year: 1914.

Every day there are new videos on social media showcasing computer-controlled devices performing amazing feats. Lasers cutting with absolute precision, robotic arms laying down multi-layered rows of any given material, from plastic to concrete to steel, and Computer Numeric Controlled (CNC) machines blasting, grinding, and cutting with in-human accuracy. From Kickstarter campaigns aimed towards funding a new prototype, to technology giants releasing their latest offering, there are ways to get whatever you need made by a robot.

Students within the Department of Theatre and Dance utilize technology in a variety of ways. One of the more prevalent areas can be seen in the design/tech courses. Most design students, after learning how to hand draft, move on to CAD (computer aided drafting) to develop their ideas into what will become realized productions or "paper projects."

Today's software, such as Vectorworks Inc., allows not only the ability to replicate what one used to do by hand, but create virtual 3-dimensional sets complete with lighting, to show the director, actors, and other designers. These creations can be extremely life-like, down to the most minute details.

When students enter my 3000-level Spanish course on Basque culture, they naturally find themselves grappling with a lot of historical and cultural background as they try to understand how a small region, nestled on the Spanish and French border, defied both nationalities...

Of all the French courses I have taught at Tulane, Teaching French, a dual-level pedagogy course, is the course which enables both instructor and students to make the most frequent, purposeful, and innovative use of technology.

Message from the Dean The New Age of Liberal Arts

Throughout the School of Liberal Arts, in fields as disparate as studio art and economics, a revolution is taking place. For students and teachers alike, technology has radically changed the way they learn and communicate. Even within the most traditional of classrooms, walls often seem to be suspended as computers help craft imaginary lives, pose intricate problems, or create new images and sounds.

I work in digital media to study the personal and cultural associations that shape our perceptions of media and technology, and the assumptions about referentiality, artificiality, and authenticity we impose on them. Much of my recent work relates to political and physical environments, the digital representation of places, and their convergence in contemporary life.

In Fall 2016, students in two Introduction to Microeconomics courses used MobLab to conduct in-class economic experiments. MobLab is a web-based tool that allows students to interact with each other in real time using a laptop, tablet, or smartphone. The experiments are designed by randomly assigning students to a role in a hypothetical market.

The TUMB is proud to announce their 2017 Mardi Gras Parade Schedule. Join us and be in that number as the Tulane University Marching Band rolls with various Krewes for 2017.