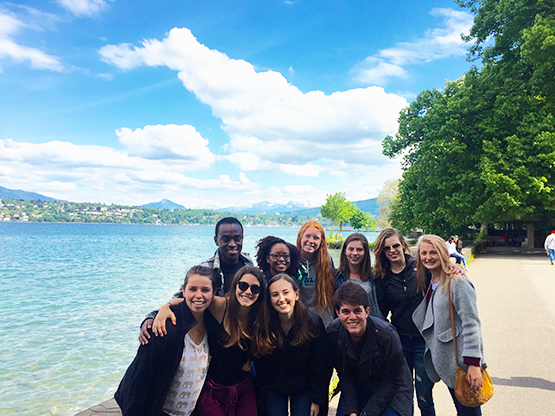 Every summer, School of Liberal Arts students travel all over the globe as they continue their studies. Above, SLA students visit Switzerland as part of the Institute for International Development in Geneva. View a slideshow of summer activities submitted by students and faculty.

This summer I traveled to both Cuba and Brazil to learn about their public health systems. I conducted research in Cuba at the National School of Public Health, and learned about Zyka and maternal health in Brazil.

I decided to work as a volunteer in the Rio 2016 Olympics because I used to live in a NE part of Brazil, a city called Recife. There I learned Portuguese and kept a very strong desire to return to Brazil.

In 2013, Elizabeth Wittenberg applied via the official 2016 Olympic games website to work in Rio. She learned that she had been selected as a volunteer last winter.

This summer I participated in two internships in the entertainment industry. The first was at PMK*BNC, an entertainment PR firm, and the second was Cross Creek Pictures. I worked in the film and development departments respectively. Everything was amazing! I was an integral part of the team in each office, helping everyday with press breaks or writing coverage.

This summer I was fortunate enough to intern for Sony Pictures Entertainment in their TV casting department in Los Angeles, CA. Over the course of my 14 week internship I have learned so much about the entertainment industry. My bosses Dawn Steinberg, Delia Frankel, and Randi Chugerman oversee the casting for over 30 scripted shows that Sony currently has on air or in development.

Passion for Shakespeare Continues after Tulane

There is no doubt that my Tulane degree and my four years in New Orleans shaped not only my career, but who I am today. I met my husband in New Orleans (he is a Tulane Law graduate), and we visit often, now with the added joy of sharing our favorite city with our daughter. And on our visits, I always find myself drawn back to Tulane, returning to check in on the school that gave me so much.

In Washington, internships matter. Most people can't work here unless you begin to pay your dues as a summer intern – hopefully with a prestigious organization that offers the opportunity to pursue substantive work.

National Endowment for the Arts Once Again Supports Shakespeare

Through a newly awarded $25,000 grant from the National Endowment for the Arts (NEA), the New Orleans Shakespeare Festival at Tulane in the School of Liberal Arts will continue igniting excitement about language and learning by bringing professional Shakespeare into the lives of local students.

Although the thermometer may still say 90 degrees, and we are daily dodging tropical rain showers, the energy of new and returning students leaves little doubt that a new academic year has begun. On August 26th, we were delighted to meet incoming freshmen and their parents at our SLA open house and share with them the wide range of courses, programs, and majors that comprise the School of Liberal Arts.

News from the Field: Colin Crawford Institute for International Development in Geneva – Summer 2016

For six weeks this summer, 10 Tulane undergraduates experienced the United Nations system up close in Geneva, Switzerland. The program, Institute for International Development in Geneva, included an intensive course on health, development and migration and an internship with the Geneva-based non-profit, the International Center for Migration, Health and Development (ICMHD).

New Orleans native and nationally celebrated pianist and composer Courtney Bryan joined the School of Liberal Arts this fall as an assistant professor of music. Bryan brings her exceptional talent to the renowned Jazz Studies program.